Interview by Hillary Copsey. Photography by Stacy Wegley. | Start talking about housing in Cincinnati – particularly affordable housing – and eventually, someone is going to say, “You should talk to Mary.”

Mary Burke Rivers is the executive director of Over-the-Rhine Community Housing (OTRCH), a nonprofit organization that develops and manages resident-centered affordable housing and aims to build inclusive community and benefit low-income residents. For three decades, Rivers has been at the center of the discussions about housing in Cincinnati, constantly advocating for making clean, safe housing available to everyone.

You’ve been here at Over-the-Rhine Community Housing for 25 years. Over that time, how would you characterize the change in the conversations about affordable housing?

There’s a negative stereotype of affordable housing. Every neighborhood is afraid of it. They don’t want it. They fear it will impact property values. There’s just a lot of fear. It’s pretty much the same – except, there’s less and less resources on a federal level, so it makes it even more challenging.

When we look at the affordable housing crisis today, on a positive side, we’re talking about it. But we’ve got to move that to action. And that’s the hard part. That’s where leadership is required.

When neighborhoods experience disinvestment, there’s “affordable housing” there. The decline is already happening, and then the decline provides space for – not really affordable housing, but a space where people will buy properties and rent to people with low incomes. Then people who have been in the neighborhood for a long time say, “Ah! There’s been disinvestment and it’s your fault! That’s Section 8 housing, and it’s Section 8 housing’s fault!” When more than likely what they’re pointing out probably isn’t section 8 housing. It’s probably a property owner who’s renting to folks with low incomes who are paying more than 50 percent of their income for that apartment, so eventually it’s going to fall apart. There’ll be an eviction and then it’ll turn and then people will think that’s affordable housing. When in reality, it’s serving that low-income market, but it’s not affordable. …

There’s a book called Evicted – it’s that scenario. It’s a landlord that sees an opportunity to make some money, but the model is not sustainable for the community. It’s a subprime market that has to be created because we don’t have a system in our country to provide housing for people who need it. The story goes that, back in the ’70s, if you made minimum wage, literally you could afford an apartment. That’s not possible today.

Yeah, the National Low Income Housing Coalition just released that study that showed there is nowhere in the U.S. where minimum wage covers the cost of a two-bedroom apartment.

There’s two sides: [Make] sure that people’s salaries increase significantly, or figure out a way to subsidize housing.

I read an op-ed you wrote about CEO pay and the dramatic income disparity in Cincinnati. You were adamant at the end that charity can’t take care of the problems caused by income disparity. Why can’t charity deal with these problems, including housing?

Charity should be for emergency situations. This is a systemic piece where the math doesn’t work. If you’re a senior and you’ve worked your 50 years or more and you’re on a fixed income, you can’t afford what it takes to run a household responsibly. … Charity can’t fix that gap for millions of people who need that gap addressed.

Even the subsidy programs are really hard to fund, because they don’t end. When you subsidize someone’s rent, some people hope you’ll move off needing that subsidy. But you have to make considerably more money to be in a better spot where you don’t need that rental subsidy anymore. We have those conversations all the time: “When do people move out? When do they not need us anymore?” Part of it is that we don’t want people to be stuck in poverty, but we also want people to have community and relationships. The goal for us isn’t to move people out. There are just a lot of steps that people have to go through to get to a point where they can operate a housing unit. … And the more income [you make], the different subsidies you have for food, for housing, for daycare – those all get reduced. So if you get a raise, sometimes you’re in a worse financial place.

How did you get involved in housing work, generally, and also specifically here?

I was a social worker for the Hamilton County Department of Human Services [Hamilton County Jobs & Services]. I was in 241-KIDS; I was in the sex abuse unit, and then regular abuse and neglect intake unit. While I was in that, I realized that it was really hard for women to address issues of their own sexual abuse as a child – to address issues of how they protect their children, parenting, any of those kinds of things – because their housing was so unstable. They had moved several times in the past year, or they were at risk of being evicted in two weeks. So talking about those other issues – you just wouldn’t get to them.

She said, “Oh, well, I’m part of this group called Women Research and Development Center.” It doesn’t exist anymore, unfortunately, but Maureen Wood – she died last year, unfortunately; she was a leader in Northside, a feminist, a visionary – was leading this women’s effort to try to create housing options for women and people of color. She said, “Why don’t you come meet with us? We’re talking about rehabbing this school in South Cumminsville for affordable housing.” So, I started doing that.

And then there was this position available at the county that was called the housing specialist. If someone came into the system for whatever reason and housing was an issue, they got referred to that position. I got hired. My focus was just housing. That’s when I had the experience of being side-by-side with women who were experiencing homelessness. At the time, we placed families at the Milner Hotel. It was a hotel down on Garfield – it’s no longer there. It was a privately owned hotel, like 115 units, and we used it to keep families who were homeless together when the shelters were full, and some of the women’s shelters used it, too. This was back in the early ’90s. With the Milner, I started getting engaged in the Homeless Coalition … and I started testifying at City Hall during budget hearings about the need for affordable housing.

At the time, there were even conversations about the value of mixed income neighborhoods, so we argued that there was the perfect opportunity for mixed income down on Garfield. You had the Milner Hotel, and then you had a parking lot on either side. We were suggesting that the developer could build market rate housing on either side and then make improvements to the Milner and you’d have this mix on that block.

The city bought the Milner, tearing it down and then turning it over to the developer. So, I was lobbying at public hearings, wearing Save The Milner stickers, and then the county commissioners were like, “Who’s Mary Burke? She can’t be out there speaking out on our behalf.” So, I got pulled in, understandably.

It was a great experience working at the county, driving all over, experiencing different neighborhoods, trying to find housing, and just really having this side-by-side experience. But it was more Band-Aids than permanent solutions. I wanted to be more solution-focused. And then this position came available at what was Over-the-Rhine Housing Network. I got hired in September of 1993.

I’ve learned a ton about everything from property management to financing community development projects to building relationships with people. … I became more and more educated about social justice, racism, classism. It was during those budget processes, where I was kind of a new voice in public housing, and I thought once I shared what it was like for the women I was working with, that it would make a huge difference – and it didn’t. I started seeing how decisions are made, the golden rule thing: The people with the gold make the rules. But I also could see how advocacy works, that when people get together and organize, you can make a difference. Things can change.

But these days, it’s hard. It does seem like you get more out of the individual relationships and experiences than big systemic change, although we’ve got to fight for that, too. It can be discouraging. 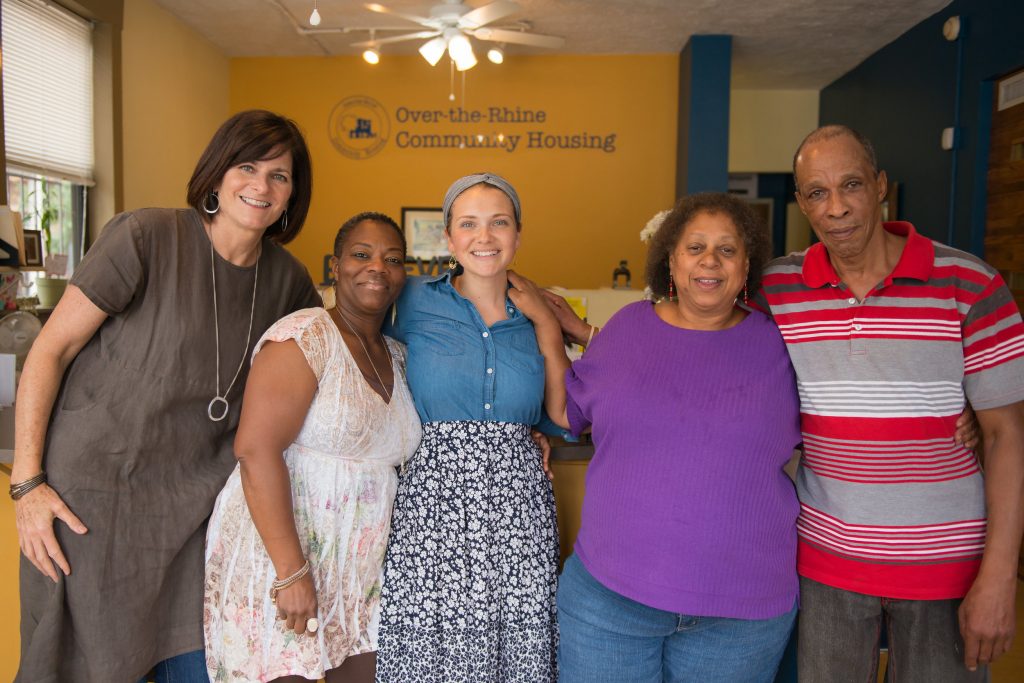 What happened to the Milner?

That’s what’s interesting about advocacy. We were fighting to save it. Other folks were fighting to get the best of what they could out of the deal. It kind of splits the effort and then, you end up getting something that doesn’t really do what it needs to do. … There were some affordable units, but they’re not there now. … A couple years ago, I got a call from a social worker who was looking for housing for a woman who was in her 80s. She lived on Garfield, and her rent was affordable, but they were increasing her rent dramatically, like $300 per month. I wondered if it was one of the affordable units from the Milner, and it was. So I called one of the principals at Towne Properties and said, “There’s a woman who’s 80 years old in your building. and your property manager is raising her rent dramatically.” And he said they’d met the 20-year compliance [for affordable units], and I said, “Well can’t you – ?” And he did. She got to stay. But it was one person and it was because we knew the story.