12 Reasons Bicycling Will Continue to Soar in Popularity

For too long biking has been viewed skeptically as a white-people thing, a big city thing, an ultra-fit athlete thing, a twenty-something thing, a warm weather thing or an upper-middle class thing. And above all else, it’s seen as a guy thing.

But guess what? The times they are a changing. More than 100 million Americans rode a bike in 2014, and bicycles have out-sold cars most years in the US since 2003.

Actually, Latinos bike more than any other racial group, followed by Asians and Native Americans. African-Americans and whites bike at about the same rate.

And, actually, most bicyclists are low-income according to census figures—as many as 49 percent of bike commuters make less than $25,000 a year.

As for other misperceptions, keep in mind that Minneapolis (in chilly Minnesota) and Arlington, VA (in suburban DC) rank among America’s top towns for biking. And the one place where bikes account for more than 20 percent of traffic on local streets is Davis, CA (pop: 65,000).

Slowly but surely, more U.S. communities are realizing that the future of mobility is bigger than cars. Biking is seen as an attractive, cost effective, healthy and convenient way to get around. Bike commuting tripled in New York, Chicago, San Francisco, Washington DC, Minneapolis, Portland and Denver from 1990 to 2012, and doubled in many other cities.

This success is changing what people see as possible for life on two wheels. There’s a new push to make bike-riding more mainstream by creating low-stress routes that conveniently take even inexperienced bicyclists to the places they want to go on networks of protected bike lanes (where riders are safely separated from speeding traffic) and neighborhood greenways (residential streets where bikers and walkers get priority).

But the culture shift in biking is about more than infrastructure. “It’s the transition from a small group of people who strongly identify as bicyclists to a bigger, broader grouping of people who simply ride bikes.” explains Randy Neufeld, a veteran bike activist from Chicago. The music star Beyonce has been known to pedal to some of her own concerts, for example, and the NBA’s Lebron James bikes to his games.

People who don’t ride are perplexed by this boom in biking. But it comes as no surprise to those who do—they know how good it feels to whoosh on a bike, wind in your face, blood pumping to your legs, the landscape unfolding all around. You feel fully alive!

How we got here—and where we want to go

“If you look at the bike infrastructure we had 20 years ago and what we have today, it’s mind-boggling,” says John Burke, president of Trek Bicycles.

“But we still have a long way to go to make a bike-friendly America,” Burke admits. “This is important for everybody because the bicycle is a simple solution to climate change, congestion and the massive health crisis we have in this nation.”

A quick glance at other nations shows what’s possible. Across the Netherlands, 27 percent of all trips are made on bike—double the rate of the 1980s. Even Canadians bike significantly more than Americans. Montreal and Vancouver are arguably the two top cities for bicycling in North America despite freezing temperatures in one and heavy rainfall in the other. Why? The prevalence of protected bike lanes and other 21st century bike facilities.

12 reasons why bikes will grow in popularity

People of color and riders over 60 are two of the fastest-growing populations of bicyclists. This is a clear sign of bicycling’s shift from an insider club of Lycra-clad hobbyists to a diverse cross-section of Americans who ride for all sorts of reasons—from getting groceries to losing weight to just having fun.

In 1969, 40 percent of all children walked or biked to school—by 2001, less than 13 percent did. Over the same period, rates of childhood obesity soared.

That prompted US Representative James Oberstar of Minnesota to add $1.1 billion to the 2005 Transportation Bill to promote Safe Routes to Schools, a variety of projects and programs in all 50 states to make biking and walking less dangerous and more convenient for students K-12. By 2012 (latest figures available), the number of kids biking and walking to school jumped to 16 percent. 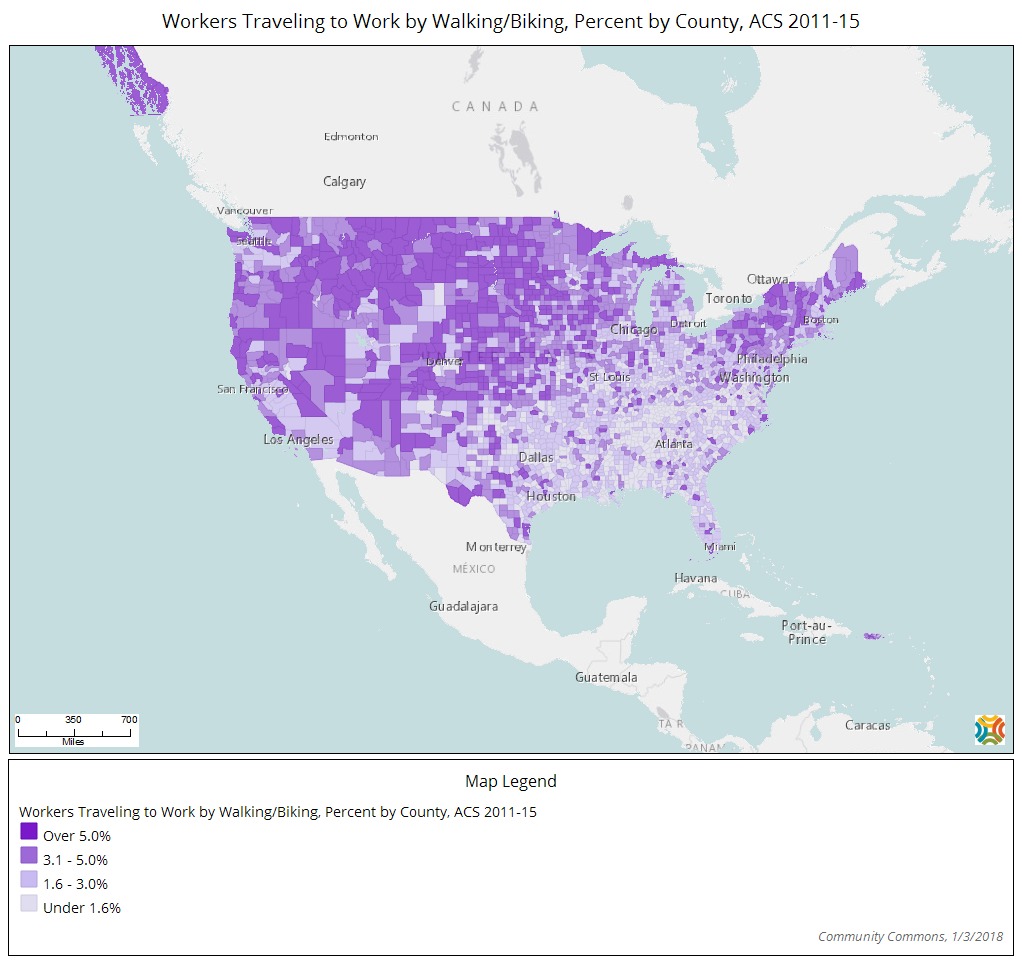 Despite biking’s macho man image, almost a third of all trips were taken by women, according to 2009 Federal Highway Administration. That number is very likely to rise in the upcoming count, thanks to streams of women becoming bike advocates—as grassroots activists, transportation professionals and bike industry leaders.

One telling statistic confirms this trend. In 1990, about 10 percent of the crowd at the influential Pro Walk/Pro Bike/Pro Place conference were women, remembers Wisconsin bike advocate Kit Keller. At the most recent conference, women outnumbered men in both the audience and among the speakers.

Expanding access to biking means moving beyond from stand-alone bike lanes to connected networks that give bicyclists the same ease of mobility that motorists enjoy on roads and pedestrians on sidewalks. That’s how many European nations have achieved big increases in bike ridership over recent decades.

This vision—being jumpstarted in the US by Big Jump Project—can already be glimpsed in certain neighborhoods of Brooklyn, Indianapolis, Austin, Calgary and Fort Collins, Colorado.

5. Bikes Available When You Want Them

Bikeshare systems—where a rental bike is yours at the swipe of a credit card or clicks on a smartphone—have swept across America since 2010. Eighty eight million rides were taken on 42,000 bikes in the 55 largest systems last year, evidence that bikeshare is changing how people—including many who do not own a bike— get around town.

Meanwhile in China, a new kind of bikeshare, where bicycles are available everywhere on the streets not just at designated stations, is resurrecting biking on a dramatic scale. 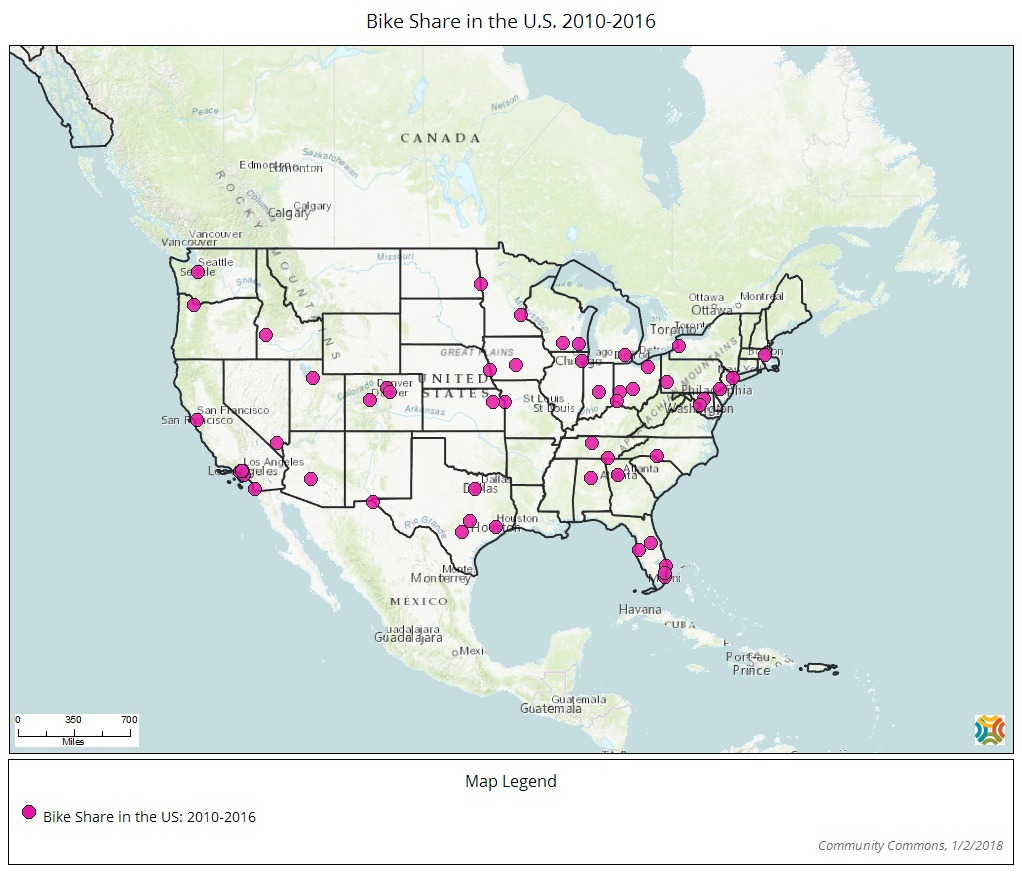 The federal Centers for Disease Control and Prevention (CDC) recommends 30 minutes of moderate physical activity like bicycling five days a week based on medical studies showing that it reduces your chance of dementia, depression, anxiety, diabetes, colon cancer, cardiovascular disease, osteoporosis and other health threats by at least 40 percent. Enough said.

This technological innovation—in which riders’ pedaling can be boosted by a rechargeable battery—answers many of the excuses people have for not biking: hills, long distances, sweaty clothes, strong winds, hot weather, cold weather, and not being able to carry things due to weight, says bike activist Randy Neufeld.

Neighbors across the country are rising up to have a say about the future of their communities. Sick and tired of planning decisions that favor automobiles over people, they advocate solutions that promote biking and walking such as Complete Streets (roads designed with all users in mind) and Vision Zero (a strategy to eliminate traffic fatalities).

Almost daily headlines remind us that climate disruption is a problem we must fix now. Transportation makes up the second biggest source of greenhouse gases. Seventy-two percent of all trips three mile or less are made by motor vehicles today, the vast majority of which could be biked in less than twenty minutes.

10. The Rise of Autonomous Vehicles

Sooner or later driverless cars will dominate traffic on America’s roads, which could result in a surge of bike riders. Research shows 60 percent of Americans would bike regularly if they felt safer on the streets and this new technology can dramatically reduce crashes. Also, autonomous vehicles require far fewer parking places, opening up space in the street for state-of-the-art bikeways. 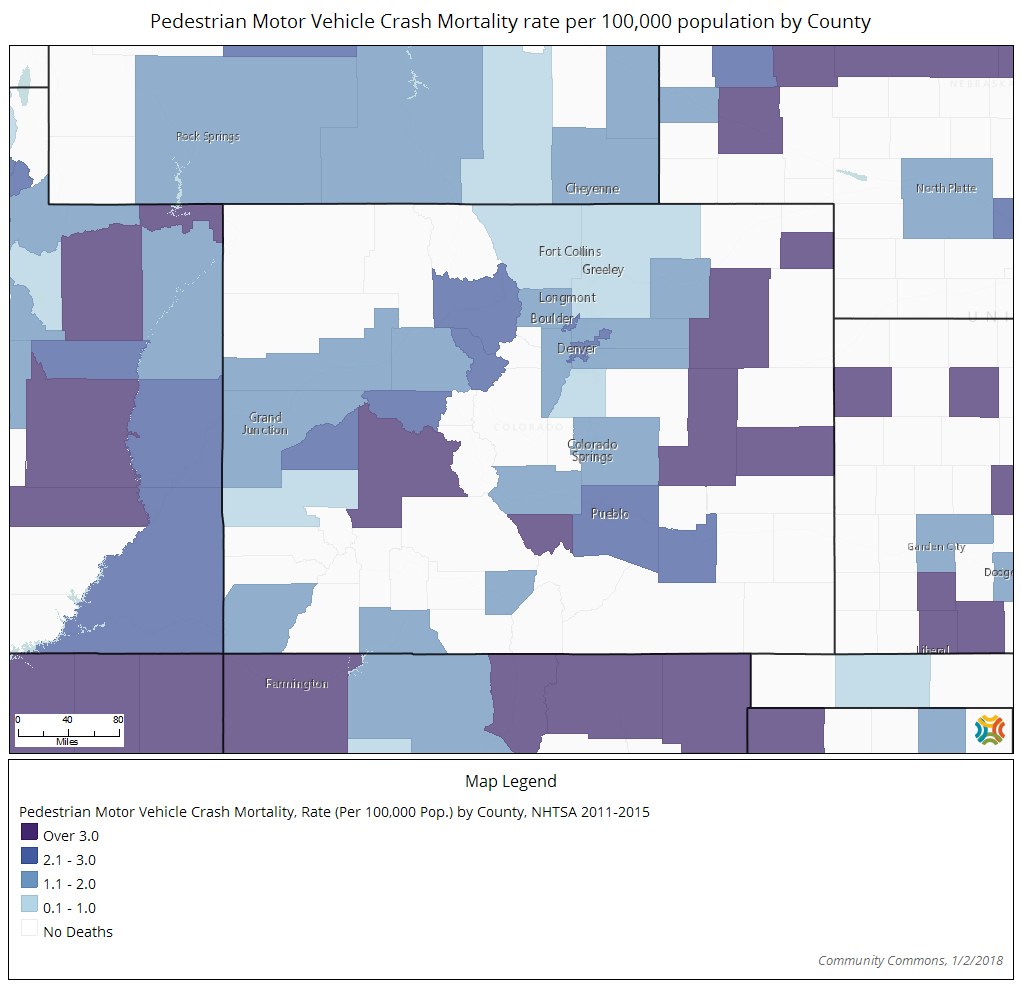 “It may be that only every third street has cars allowed on it,” muses Gabe Klein, former transportation director in Chicago and Washington. “The choices we make about how autonomous vehicles are regulated are crucial. If we get it wrong, the future is grim for any not in a car,” cautions Andy Clarke, Director of Strategy for Toole Design Group.

11. The Emergence of Bike Planning and Advocacy as a Profession

Thousands of professionally-trained people are now employed by government, private business and nonprofit organizations to improve biking in America’s communities.

12. Better Communities—Even for Those Who Don’t Bike

When National Geographic magazine and the Gallup organization recently rated the 25 happiest cities in the US, the article’s author Dan Buettner noted, “There’s a high correlation between bikeability and happiness.”

Click the map to learn more about the Happiest Places.

Even people who never hop on a bike benefit from bike-friendly improvements—a safer environment for walkers and drivers, less traffic and more vital neighborhoods and business districts.