2016 Health of Those Who Have Served Report

Our nation is grateful for the dedication of those who have served in the United States Armed Forces and for the sacrifices they have made to keep our country safe. From enlistment through retirement, the health of these individuals is a high priority.

America’s Health Rankings, in partnership with the Military Officers Association of America (MOAA), collaborated with an advisory steering group of leading military, veterans, and public health organizations to develop a holistic study of the health of those who have served in the U.S. Armed Forces compared with the health of civilians. The report establishes a baseline portrait of the health of those who have served, analyzing 24 health measures from the Centers for Disease Control and Prevention’s Behavioral Risk Factor Surveillance System (BRFSS)—the world’s largest, annual population-based telephone survey of more than 400,000 people. 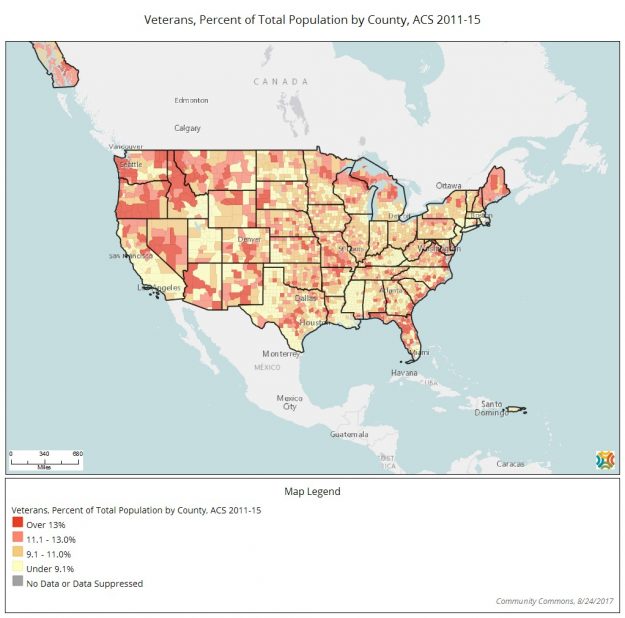 Those Who Have Served, While Reporting Better Overall Health, Face Considerable Health Challenges
The report highlights that those who have served are more likely than civilians to report that their health is very good or excellent. This is true for both men and women, as well as many minority populations. For example, significantly better health is reported among non-Hispanic black, Hispanic, and non-Hispanic American Indian/Alaska Native individuals who have served than individuals in these groups who have not served.

However, despite reporting better overall health, those who have served face distinct health challenges, including higher rates of coronary heart disease, heart attack, and cancer than their civilian peers. Across several chronic conditions, differences in rates between those who have served and civilians increase with age. For example:

The report also finds that people aged 18-39 who have served have lower rates of certain chronic conditions such as diabetes, but they sleep less and smoke more than civilian peers.

Physical Inactivity Lower for Those Who Have Served at All Ages

The report finds good news for service members when it comes to physical inactivity. Those who have served are less likely to be physically inactive than civilians, a pattern that cuts across all age groups from 18-39 year olds to those 80+ years of age.

While overall obesity rates are generally similar for those who have served and civilians, obesity is less common among service members with incomes below $25,000 than for civilians in the same income range (29.9% vs. 34.4%).

Those Who Have Served Have Higher Rates of Health Insurance Coverage and Use of Preventive Services, but Are Less Likely to Have a Personal Health Care Provider

The report also considers key indicators of health care access, including health insurance coverage, likelihood of having a personal health care provider, and utilization of preventive services. Those who have served are more likely to be covered by health insurance than civilians. Notably, Hispanics who have served have particularly higher rates of insurance coverage than Hispanics who have not served (87.9% vs. 66.5%).

The health of those who have served is an important area of focus for policymakers, health officials, and community leaders. Through this report, the United Health Foundation and MOAA aim to share important insights related to the health of this population—including their perceptions of personal health, their experiences with the health care system, and their health outcomes. United Health and MOAA encourage others to use these findings to help improve the lives of service members and their families and to help improve the health of the communities in which these individuals live.