Life Off the Highway: A Snapshot of Rural America

This article was written by Alison Fields, Kelly Ann Holder, and Charlynn Burd, Social, Economic and Housing Statistics Division. It was originally published to the Census blog, Random Samplings, on December 8, 2016.

We are a nation of communities. The 2011-2015 American Community Survey statistics released earlier this year helps tell the story of us all — each city, town and neighborhood. This year we are taking a detour down a road driven by only one in five Americans. We are exploring what the latest U.S. Census Bureau statistics can tell us about the 60 million people who live in rural America. Rural areas can take on varying characteristics affected by regional differences across the country. The rural population is not the same everywhere except in its distinction of not being urban. American Community Survey statistics are the only source of annual data for some rural residents, and are vital for local decision making by elected officials, city and county planners, and businesses. Recently, the Census Bureau released several products highlighting selected characteristics of the rural population of America.

The term rural means different things to different people. For many, it conjures images of rolling hills and farmlands, with infrequently clustered houses. For our purposes, we explore rural statistics based on the official Census Bureau classification. Urban and rural areas are defined after each decennial census, every 10 years, by applying specific criteria related to population thresholds, density, distance and land use. The same geographic designations are then used in the American Community Survey each year for the next decade. 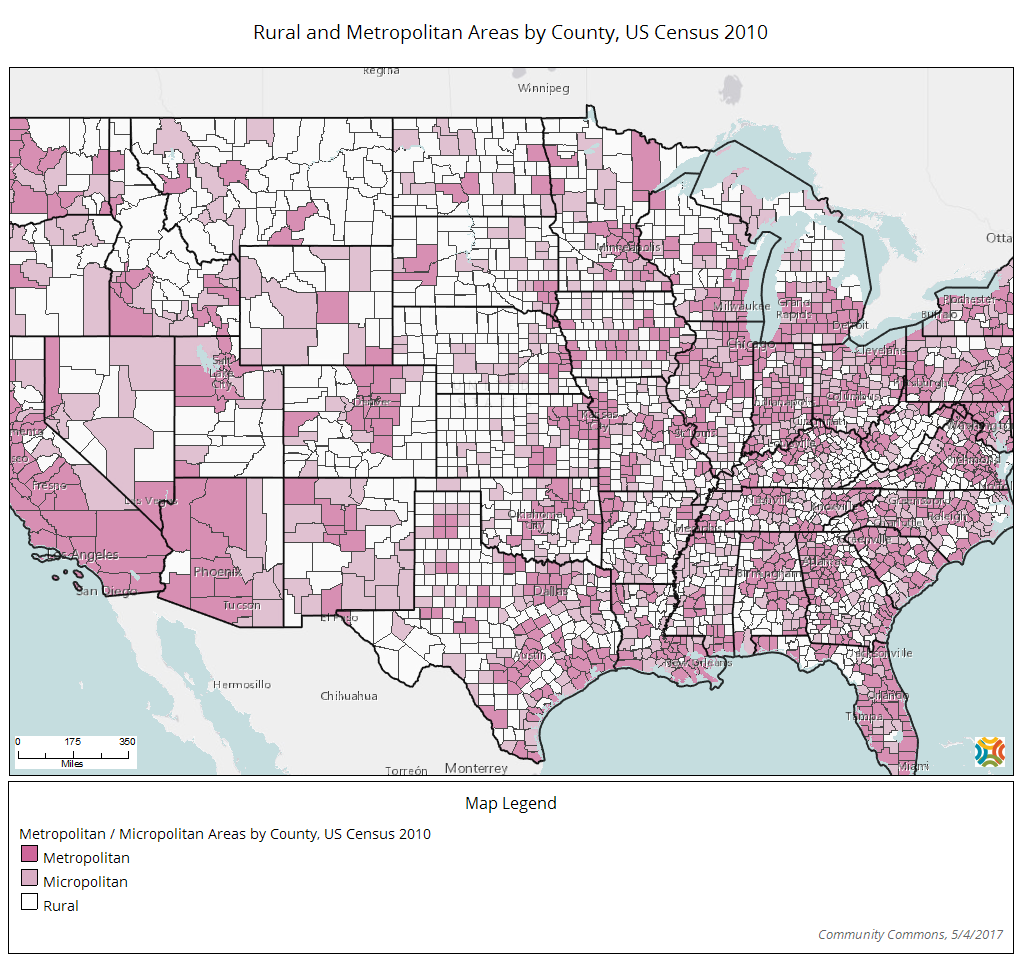 Urban areas represent densely developed territory, and encompass residential, commercial and other nonresidential urban land uses. The Census Bureau identifies two types of urban areas: urbanized areas with 50,000 or more people and urban clusters with at least 2,500 people and fewer than 50,000 people. Rural areas encompass all population, housing and territory not included within an urban area. Generally, rural areas are sparsely populated with a low housing density, are not built up, and are at a distance from urban areas. Urban areas and urban clusters make up 3 percent of the entire land area in the country but contain 80.7 percent of the population while rural areas spread across 97 percent of the land area and contain 19.3 percent of the population (see Table 1). For more information about how the Census Bureau defines urban and rural geographies, see our new brief Defining Rural at the U.S. Census Bureau.

Over the past century, the nation’s urban landscape has changed, and with it, so have our rural areas. As population change has transformed our urban areas and the criteria used to define it, the rural population has decreased from 54.4 percent of the total in 1910 to 19.3 percent by the 2010 Census (see Figure 1). 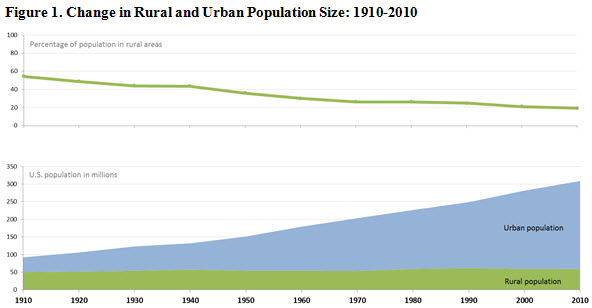 Where today’s 60 million rural Americans live might actually surprise you. American Community Survey statistics show that Maine and Vermont have the highest proportions of population living in rural areas (about 61.0 percent) and California has the lowest (4.9 percent). While the Midwest and West may appear to have a larger share of wide-open rural spaces from the view outside of an airplane window, the majority of the nation’s rural population (64.4 percent) actually lives east of the Mississippi River. Only 10.0 percent of the total population of the West lives in rural areas. Nearly half (46.7 percent) of all people living in rural areas are in the South. That is about 28.0 million people, more than the populations of Washington, Massachusetts, Arizona and Indiana combined.

The Census Bureau’s American Community Survey data products for rural areas are available on census.gov in American FactFinder for the nation, regions and states. By using the 2010 Census as a guide, we can demonstrate how to look at American Community Survey statistics at the county level based on a concentration of rural population. County-level statistics are suitable for this exercise because counties are a geography that most people can conceptualize, the statistics are easily accessible from American FactFinder, and they are useful for many policy purposes.

By calculating the percentage of the population in each county who lived in rural areas in 2010, we can create one measure of “rurality” that we can then apply to the American Community Survey statistics (see Table 2 and Figure 3). Counties run somewhere along a spectrum of completely rural to completely urban. Of the 3,143 counties and county equivalents in the United States as of 2010, 704 consisted of populations that were completely rural by the 2010 Census designation. At the other end of the urban/rural spectrum, only 29 counties in the country had no rural residents. The majority of counties fall in between. 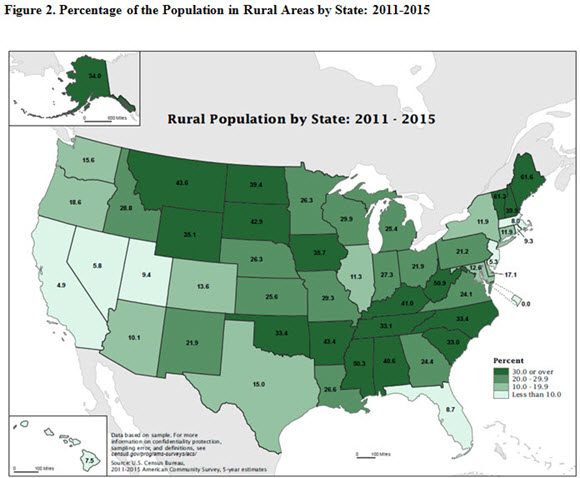 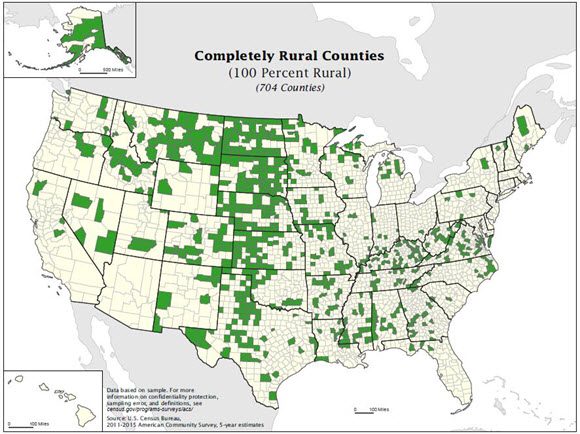 It is also important to point out that the Census Bureau’s definitions of urban and rural differ from the classifications of metropolitan and nonmetropolitan. Often nonmetropolitan, or nonmetro, is used synonymously with rural, and while there is overlap, these geographic entities are not identical. Over half (54.4 percent) of people living in rural areas live within a metro area. Only 59.2 percent of the nonmetro population lives in rural areas.

The infographic, Our Changing Landscape, displays national-level statistics that allow a comparison of people in urban and rural areas on a select number of characteristics.  With the data products released today, we add to the narrative of our nation and our communities. To learn more about the American Community Survey including other topics covered, please visit <www.census.gov/programs-surveys/acs/>.