Seventy years ago, finding child care wasn’t much of a challenge. In 1948, only 17 percent of married mothers held jobs. Today, though, nearly 65 percent of mothers with children under age six are in the workforce. This dramatic rise in working parents has not been matched by a sufficient increase in child care services, and finding high-quality, affordable care for young children can be an expensive and fruitless battle for parents.

Increasing demand for child care has created a feverish scramble for openings at child daycare centers. In an NPR survey of 1,000 parents, one third reported difficulty finding child care. In some areas, the shortage is so pervasive that parents begin searching for a center months before their baby is even born. These families are forced to pay large, nonrefundable wait list fees to clinch a coveted spot in time to return to work. For low-income families, these fees create barriers to finding care for their children. And since many high-quality care centers do not accept existing government subsidies for child care, the field narrows even further for low-income parents. 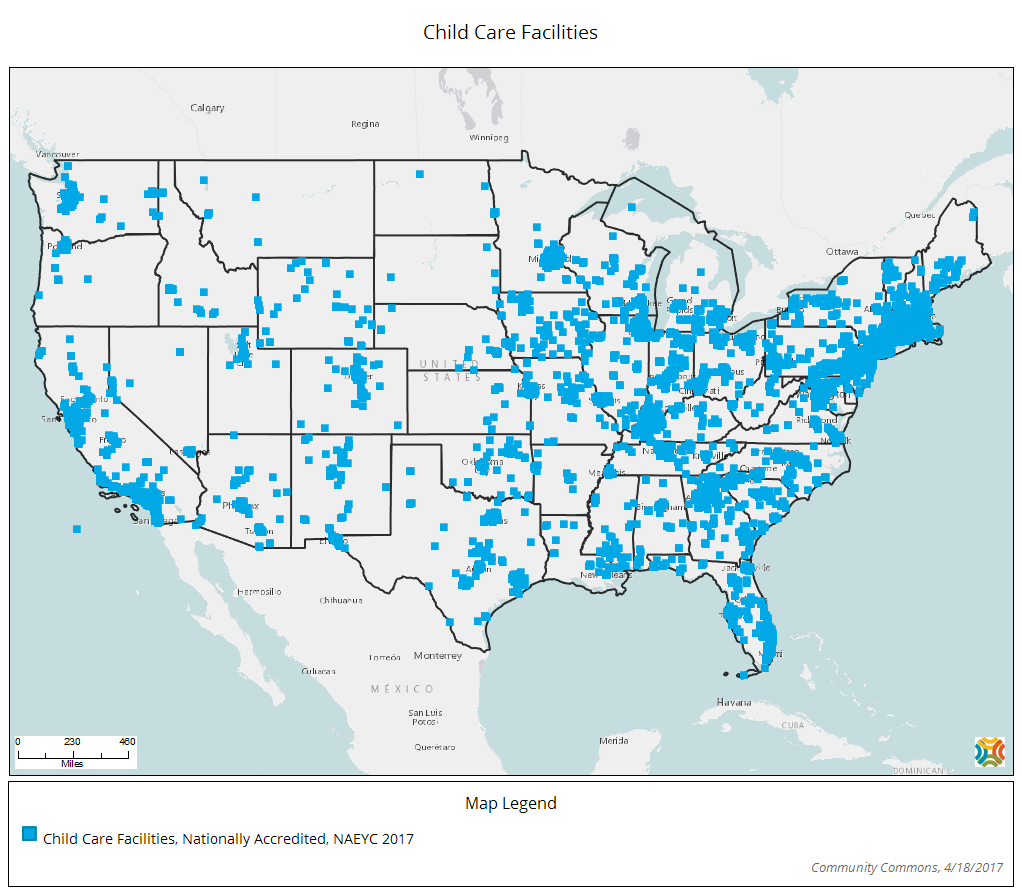 Below are maps comparing populations of children age 0 to 4 and child care services per 100,000 people. Although other factors may contribute to the number of child care services in an area, such as a large number of stay-at-home parents, these maps reveal possible inconsistencies between the supply and demand for child care facilities. For example, South Dakota has the highest percentage of working families in the United States, but the least amount of available care. 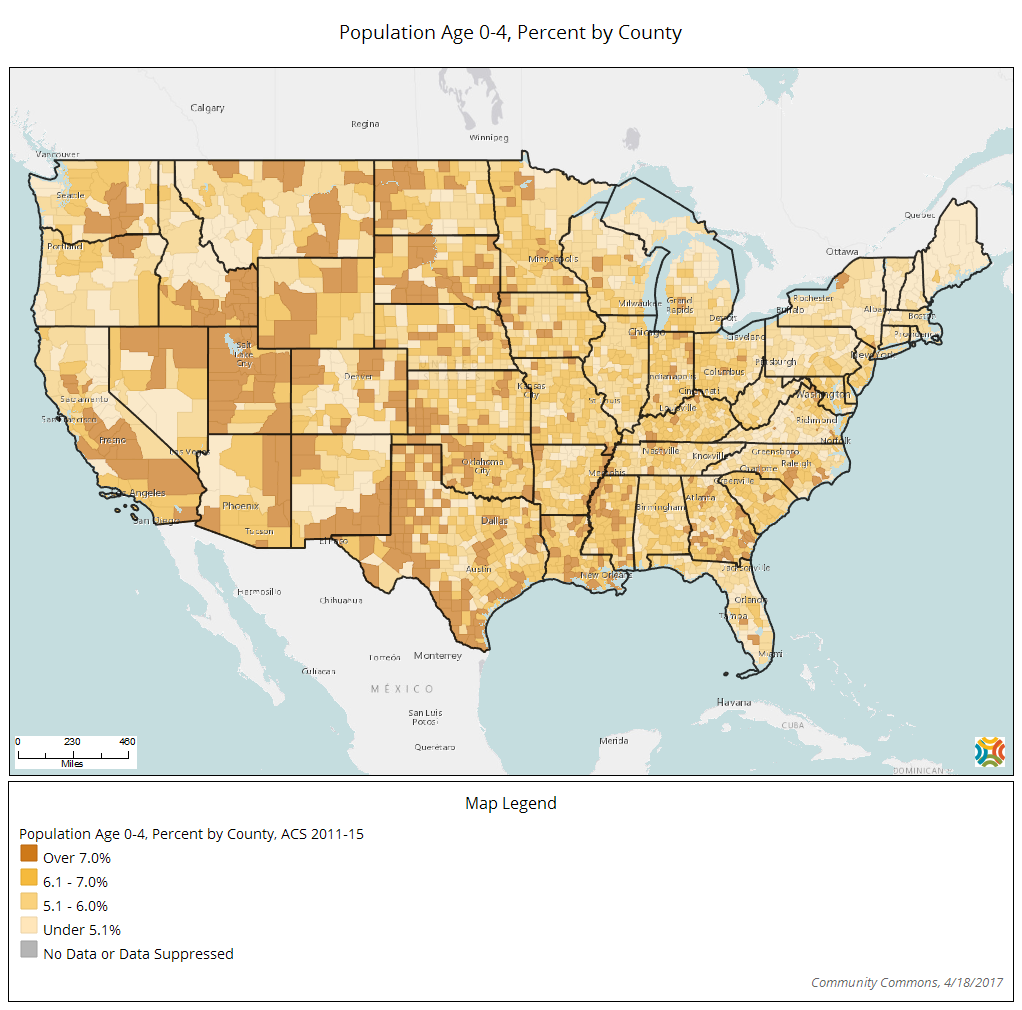 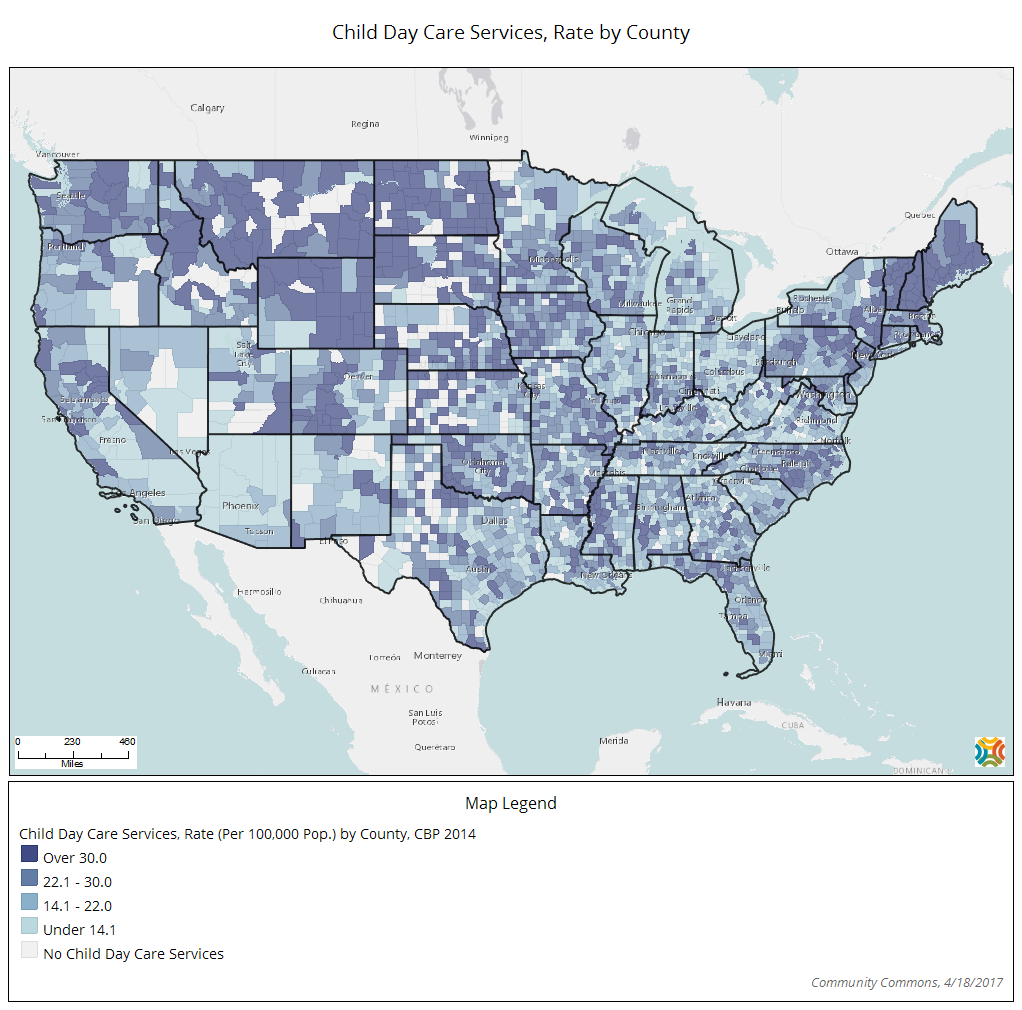 The average cost of full-time daycare for U.S. children age 0 to 4 soars at $9,589 a year. That’s higher than the average cost of in-state college tuition. Despite this high cost of care, though, the paychecks of child care workers are tiny. In fact, the median salary of child care workers is only about $20,000 a year. At that rate, child care workers wouldn’t even be able to afford care for their children. So why does child care cost so much?  The discrepancy is rooted in policies designed to improve the quality of care. Low child-to-staff ratios are required by many states. However, a large number of workers increases expenses, and centers must also grapple with the costs of real estate, supplies and insurance.

Since many child care centers can’t afford to lower their fees without forsaking quality, many researchers argue that the government should step in to reduce costs for parents and raise employee salaries. President Donald Trump proposed a child care plan to Congress in February, championed by his daughter Ivanka, to help parents pay for daycare. But if the plan becomes policy, the primary benefactors would be federal income taxpayers, who make up only 55 percent of U.S. households.

That means low-income families — the ones who don’t earn enough to pay federal income taxes — would continue to suffer heavy costs. In order for child care to be considered affordable, it must constitute less than 10 percent of a family’s income. Yet for families earning less than $18,000 a year, about 40 percent of their income goes toward child care. In contrast, families earning more than $54,000 annually spend only 6.7 percent of their income on childcare expenses.

Another solution to exorbitant child care costs is employer subsidizing of child care. Some corporations have partnered with child care centers to build facilities almost exclusively for their workers’ children, offering care at lower rates. However, these benefits are unlikely to reach many Americans living in poverty anytime soon.

Clearly, the low availability and burdensome costs of child care are growing problems in the United States affecting both wealthy and poor parents, albeit in different ways. The question now is whether responsibility for the solution falls to individuals, businesses or the government.

About the author: Ruby Redekopp is a University of Missouri journalism student from Hutchinson, Minnesota. She is passionate about helping people who are disadvantaged and plans to work in nonprofit public relations.

Historic Boost to Funding and the Potential of the Child Care and Development Block Grant
March 20, 2018
© Copyright Institute for People, Place, and Possibility (IP3)