Right now, thousands of protestors from all over the world are joining protests in Standing Rock Sioux Tribe Reservation in North Dakota. The protests are in response to the proposed Dakota Access Pipeline, a 1,172 mile pipeline that wants to connect the Bakken and Three Forks oil production areas.

What’s drawing the ire of protesters and folks around the country is where the pipeline is being routed. It would pass under the Missouri river, just half a mile upstream from the reservation’s boundary. An oil spill would not only be catastrophic to the water quality, but also to the already burdened economy and health of the reservation. Second, the pipeline would pass through culturally significant sacred sites and burial grounds. While not located on the reservation, they are sites that the federal government has sought to protect.

When we look at the Standing Rock Sioux Tribe we see a reservation, like many others around the country, already in dire straights in terms of health, education, employment and economic opportunities. Understanding their history sheds some much needed light on an often-overlooked culture.

Established in 1868 as part of the Treaty of Fort Laramie, Standing Rock Sioux Reservation was originally part of the Great Sioux Reservation that included the Black Hills and Missouri River. Under Article 12 of the treaty, no cession of land could be taken unless three-fourths of adult males on the reservation approved. But by 1877, gold was discovered in the Sacred Black Hills and the area was removed from the reservation by Congress- without the required three-fourths consent.

Congress further reduced the size of the Great Sioux Reservation in 1889- dividing it into six reservations, including the Standing Rock Sioux Reservation, which has remained intact since then. This resulted in “checker-boarded” land ownership within the reservations, creating opportunities for non-Indian entities to come in and buy land for profit making ventures like casinos, liquor stores, etc – not the makings for healthy and vibrant communities.

The tribe has jurisdiction over right-of-ways, waterways, and streams that run through the land- which has lead to many ongoing disputes among the reservation, government, and private businesses- most notably the current dispute with the Dakota Access Pipeline.

In all the discussions about the pipeline, it’s important to also focus on Standing Rock Sioux Tribe as a community in need of support. There are historically rooted problems that persist to this day and will continue – with or without the pipeline- if these conditions are not acknowledged and addressed.

Standing Rock, like many reservations around the country, are plagued by poverty and poor health outcomes. So why has poverty and associated conditions persisted on these lands? 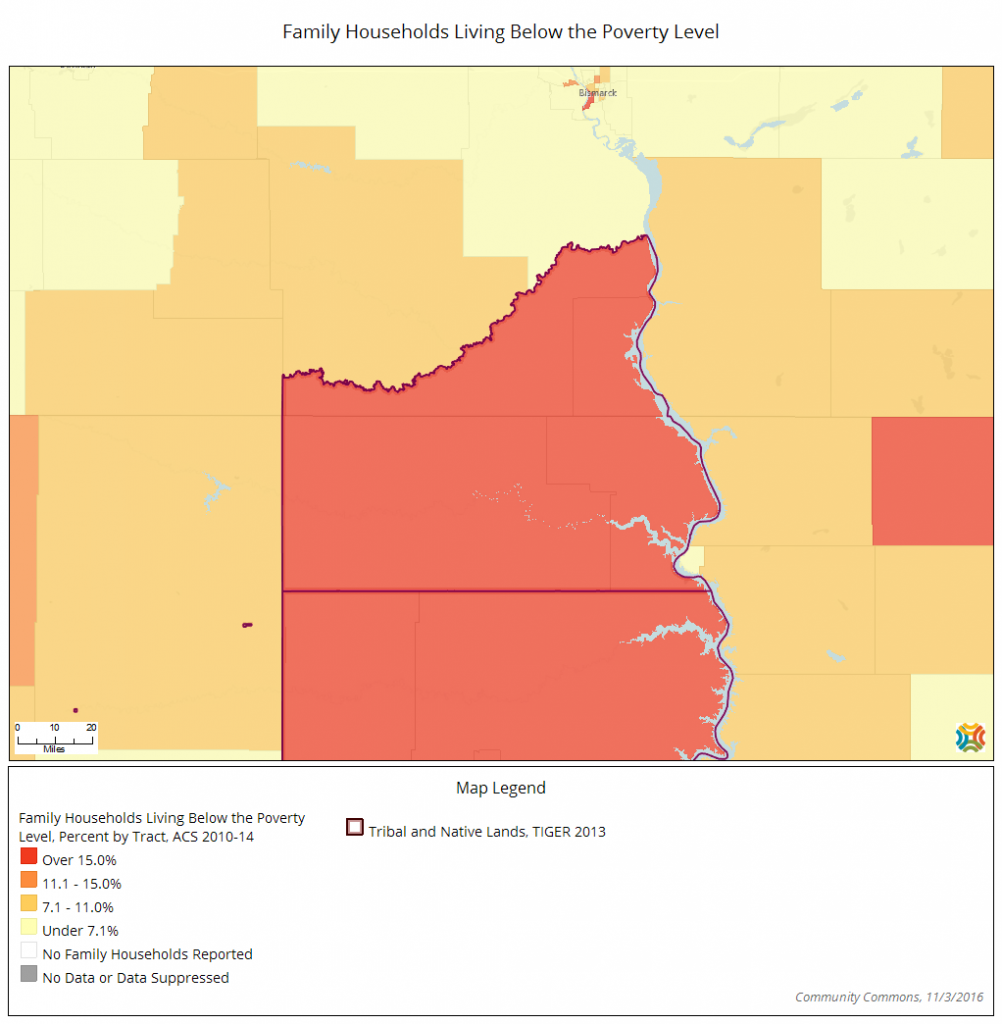 In recent years African American and Latino students have seen an increase in graduation rates- that’s not the case for Native Americans. Their graduation rates have been declining since 2008. In 2014, 67 percent of Native American students graduated from high school, compared to the national average of 80 percent. Much of the responsibility is ineffective relationships between the Indian Nations and the federal government, mostly due to mismanagement, poor leadership, and lack of collaboration among the Bureau of Indian Education, that oversees the Indiana reservation schools, and the Education Department, Department of the Interior, and Department of Housing and Urban Development. In other words, it’s a bureaucratic mess. And the students are suffering with not only poor education, but subpar learning environments as well. Many schools are rodent-infested school buildings that have electrical problems, broken water heaters, and rotting floors. 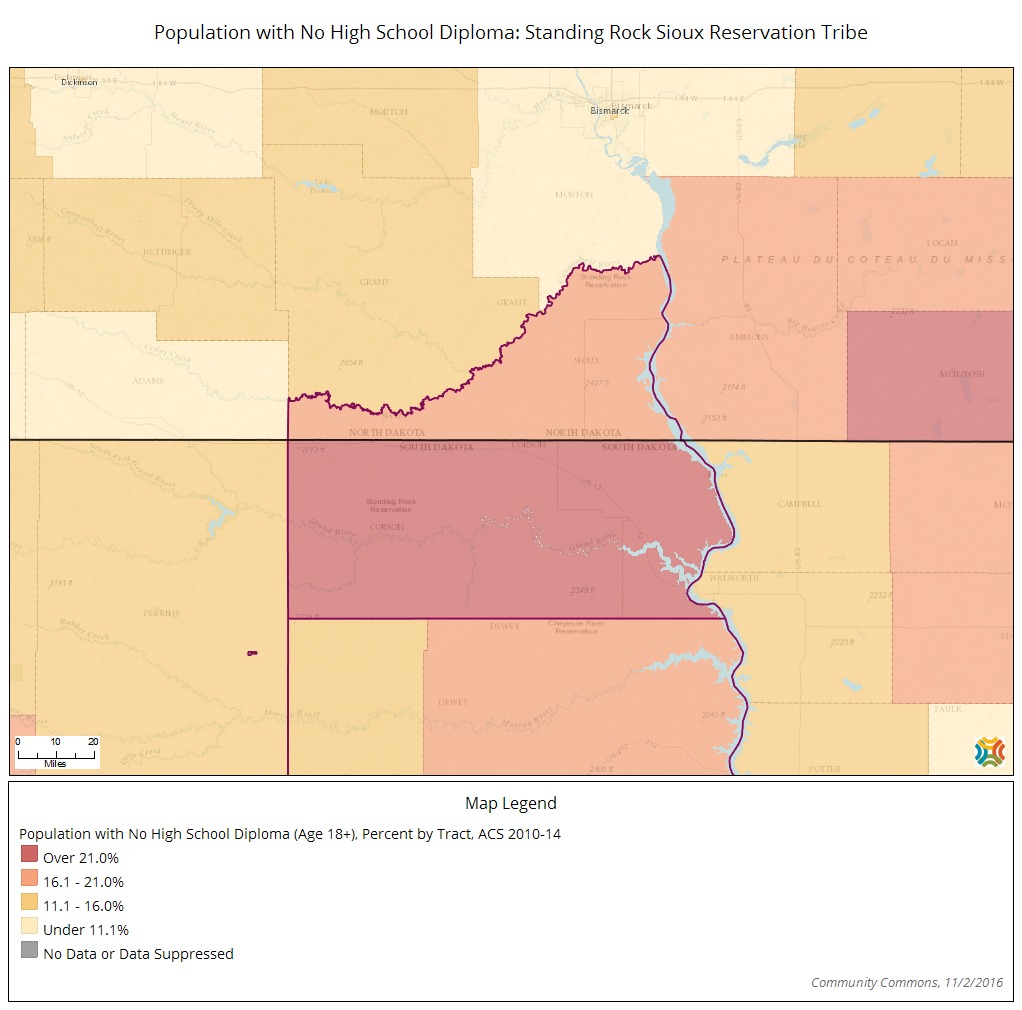 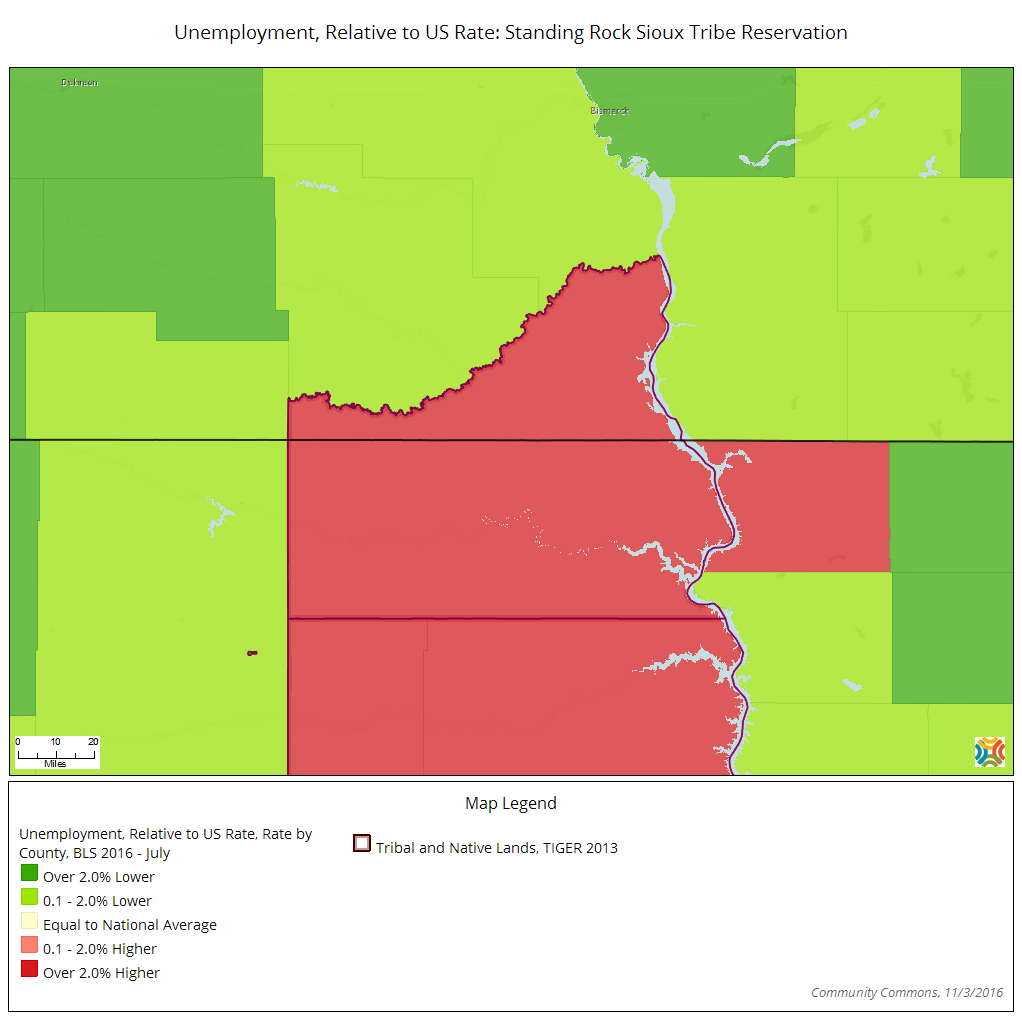 It goes without saying that not graduating from high school or earning a GED severely limits employment opportunities. That’s what we see on Indian reservations- but it’s not the sole cause for the high unemployment rate. In many cases, there are simply no jobs. The tribal and federal government are the largest employers on Indian reservations, but those jobs are limited. And If they reside in a state with poor job creation it’s even harder to find employment- even off the reservation. Families pool their resources together and often times grandparents raise the kids as mom and/or dad seek employment opportunities elsewhere. It’s a heartbreaking reality for millions of people that reside on these reservations. However, we could see a turnaround. Over the summer President Obama made a historic visit to Standing Rock Sioux Tribe Reservation where he acknowledged the critical health and economic issues facing Native Americans. He pledged to begin the process of working to create more economic opportunities on reservations. Programs like “Made in Rural America” or Program for Investment in Micro-Entrepreneurs (PRIME) are good places to start, but we still need more deeply rooted change.

America in general is facing a housing crisis, mostly due to skyrocketing housing costs- but on reservations it’s a different story: families simply trying to find adequate housing that doesn’t pose health risks. Living conditions on some Indian reservations are frequently described as “third world”. Overcrowded housing, homes with no plumbing, electricity, or kitchen facilities are more common on these reservations than most other parts of the country.  Even though the Indian Housing Authority makes efforts to provide adequate housing– only so much can be done on a stretched budget. Currently 30 percent of Indian housing is overcrowded and roughly 40 percent of housing is considered inadequate. 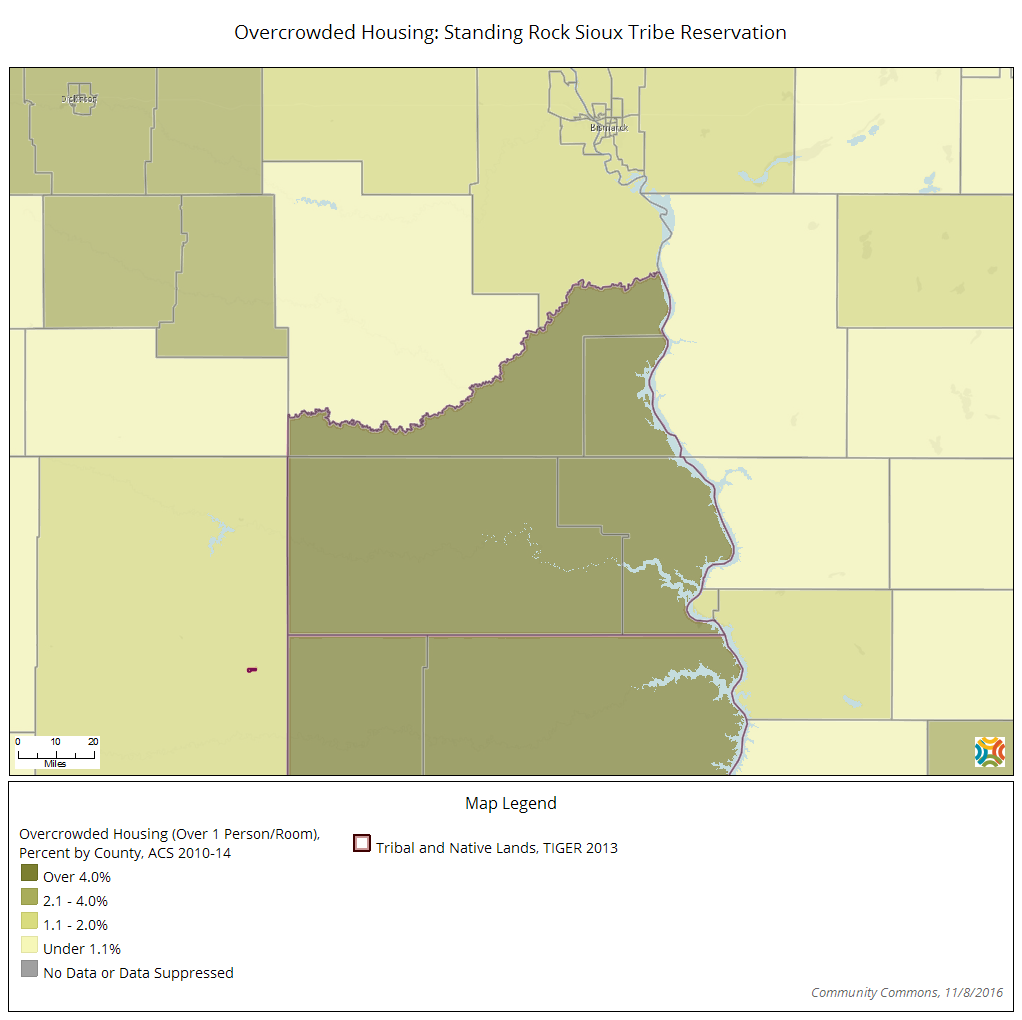 Native Americans on reservations suffer from health issues, millions across the country suffer from. However, they feel the impact much more intensely and see more premature deaths because of it. They experience diabetes, obesity, heart disease, hypertension, influenza, pneumonia, tuberculosis, and death from cancer at substantially higher rates. The severely underfunded Indian Health Service has taken on the colossal burden of managing health care on reservations. Not only are needed programs and interventions not implemented, the reservations remote locations make access to needed health and treatment facilities even more complicated.

Vast majority of Native Americans lead healthy productive lives on and off reservations- but alcohol’s role always weaves into the conversation. It’s important to understand that hard liquor (much more potent than their fermented beverages) was introduced to Native Americans by European colonists. During trading sessions the colonists would drink and provide it freely to the Native Americans or use it to trade for animal skins and furs. There was high demand with no laws to regulate it. Today we still see that impact in communities- and very little resources coming in to treat.

Perhaps most staggering is that the death rate from suicide is 50 percent higher in Native Americans than whites. Forty percent of the deaths by suicides are among 15 and 24 year olds- the highest rate of suicide among all ethnicities and higher than the general population. 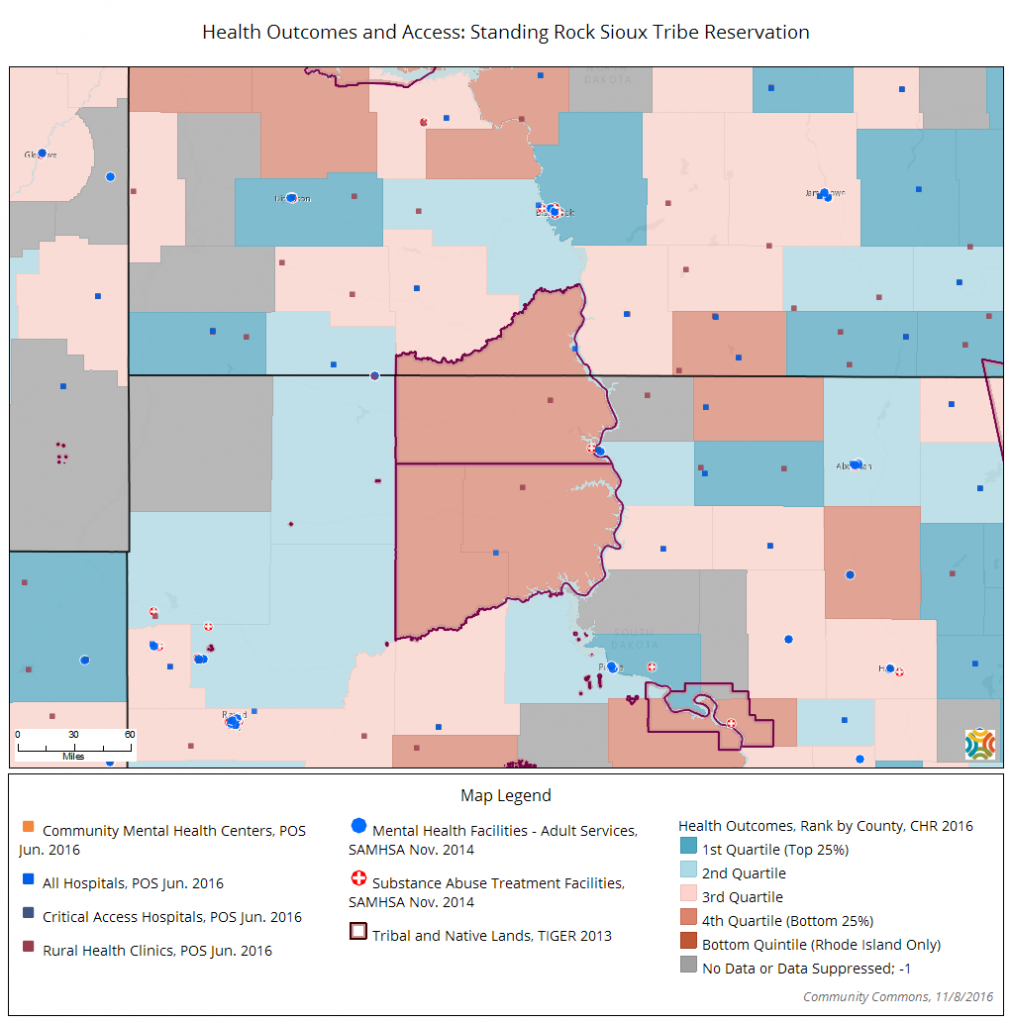 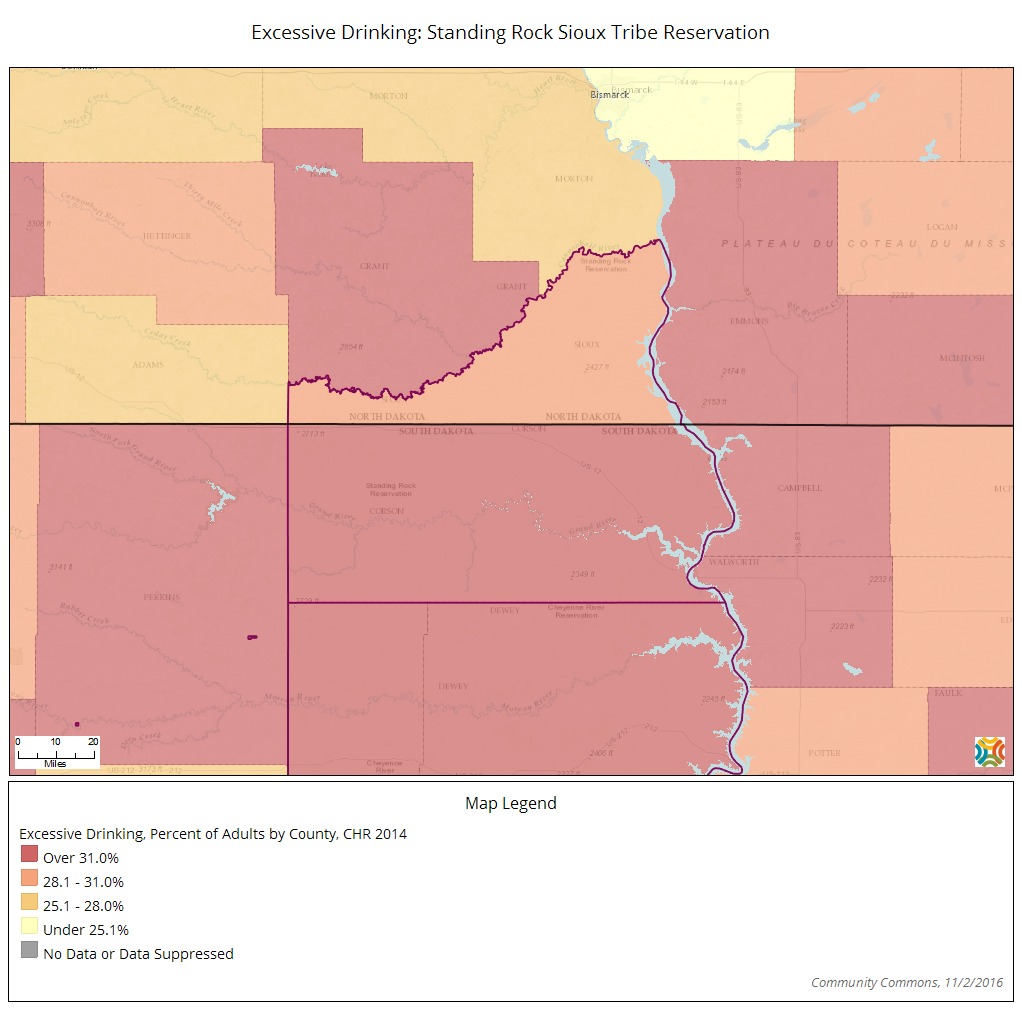 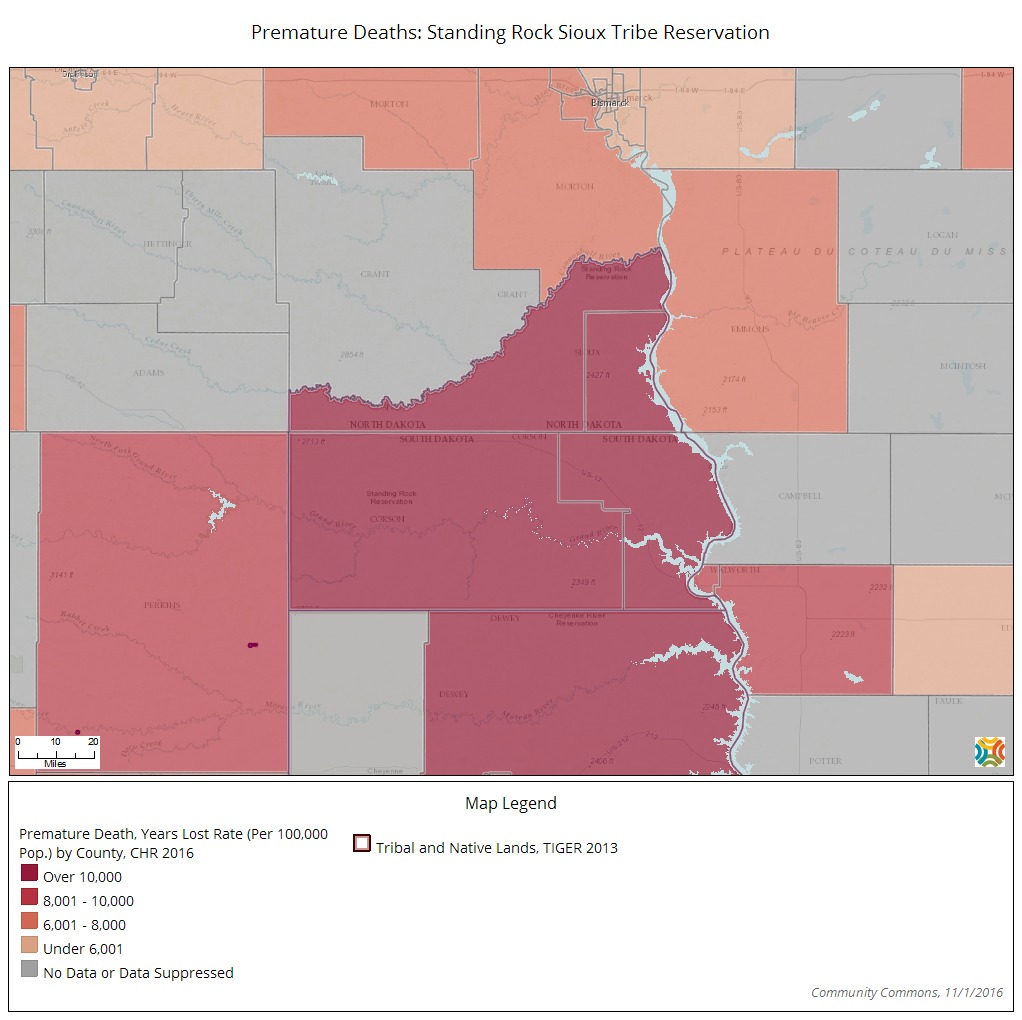 The health of Standing Rock Sioux Reservation is not an anomaly, many reservations, such as Pine Ridge in South Dakota, suffer even worse health outcomes. At the center of the issue is the lack of trust Native Americans have towards the federal government- and rightfully so, the relationship has been strained and dysfunctional from the start- and it’s the folks on the reservation that have paid the price.

When we look at the news we see a crisis- millions joining in protests to protect Native American waterways and lands from corporations. It’s a struggle that’s emblematic of the rooted tradition of devaluing Native American land and lives. The next administration should not only work to create functional, meaningful relationships with the Indian nations, but also work to harness the innovative ideas and ingenuity that are already ripe in the Native American community, especially among the youth. The passion to do better and be better for their community is there, but the opportunity isn’t. It’s a long process and hopefully the media attention from the protests in Standing Rock can bring these longstanding issues further into the mainstream. Keep talking about it- no matter what happens with the pipeline.