Partnership Spotlight: America’s Promise Alliance and the Center for Promise

Community Commons is excited to announce a new partnership with America’s Promise Alliance, an interdisciplinary alliance that works to improve the well-being of youth across the US, and its research 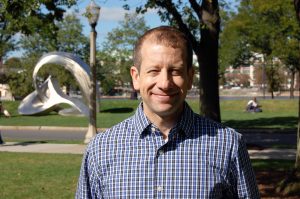 institute, Center for Promise, housed at Boston University through their partnerships, research and programming they are able to provide community change-makers with the information they need to effect change for their local youth.

This partnership underscores Community Commons’ mission of working with organizations, like America’s Promise Alliance, that strive to make data accessible and meaningful for community advocates at the local level.

We spoke with the Executive Director of the Center for Promise, Dr. Jonathan Zaff, about its most recent research focusing on how a community’s adult-to-youth ratio affects high school graduation rates, and how a partnership with Community Commons aided their initiative.

Hi Jon, thank you for joining us! Could you talk a little about America’s Promise? Your mission and the issues you focus on?

America’s Promise is the largest national network focused on improving the well-being of young people in America. We’re more specifically an alliance of 400+ organizations from across all sectors: non-profit, for-profit, faith-based, education, and government. We hold the belief that in order to ensure the well-being of all young people, we have to work together to do it. When we focus on what young people need – what we call the Five Promises – which is a development framework that is focused on the idea that if we can provide these five assets to young people, then they will have a high likelihood of thriving. Those five things are: a caring adult, at least one caring adult in their life, safe and constructive places, a healthy start and continued health, an effective education, and opportunities to give back and to serve.

That’s the way it works. It’s the big-level stuff operationally built around key issues that impact young people in America. We create strategic alignment both through national organization and community partners and we bring knowledge to bear on these issues so that people can make the most informed decisions about how to support young people.

What motivated you to seek out a partnership with Community Commons?

We’ve been connected to Community Commons from various sources, whether through a colleague who has referred us, or when we were doing a search online. Community Commons would pop up as that source, so I signed up to receive all the wonderful newsletters and kept updated on all the work Community Commons has done. When we were looking at the data that we were analyzing in what we believed to be in a unique way and thinking about ways to best visualize that data and make it usable for people around the country, we said “well why would we do this ourselves when there’s such an amazing organization like Community Commons that does this already, and that does it better than anyone we see?” So it seems like a great way to partner up on a good initiative.

The work you do is amazing so we are thrilled we can be apart of it! What kind of data were you analyzing for this project?

What we looked at conceptually was the idea of adult capacity, so “Are there a sufficient number of adults in a community to support the young people in it?” And I know there’s a lot of data points within Community Commons that look at that already. The angle we were taking was on the human aspect, the relational aspect, as a way to look at that idea of adult capacity. We looked at this ratio of adults to youth, the number of adults (aged 25+) to the number of school-aged youth (age 6 to 17). We pulled from literature on what’s called a “youth bulge,” a term that’s used often in the international development sector to describe when there’s a bias toward too many young people in a community. Previous research has studied the relation to things like civil unrest in a lot of African nations that are ravaged by things like HIV and civil war, where a lot of young people are left without parents or adults in the community. While a few studies looking at adult-to-youth ratios have been conducted in the United States, none have looked at the implications for education.

So what did you learn? What are the key findings?

From our analysis, which we did for every zip code in metropolitan areas in the U.S., we found that a one-percent increase in the adult-to-youth ratio is related to a one-percent decrease in the rate of youth leaving school. In real terms, that means that for every seven more adults in a community, there is one fewer youth leaving school. This effect of the adult-to-youth ratio is even greater in predominantly African-American communities and in higher income communities.

The concept of “youth bulge” is interesting; I imagine that has a lot of relevance in some U.S. communities, also?

That’s right. What we see in the US is a lot of variation in the capacity of communities that have adults able to really monitor, hold accountable, teach, mentor, and socialize youth in their communities. Looking specifically in this case, we have an educational outcome. The rate of young people leaving school before graduating high school is the focus of our report. Our hypothesis is that if there aren’t enough adults, neighborhoods will end up with less positive outcomes, especially in lower-income communities. The data that we have provides a tool for communities around the country whether urban, rural or suburban to be able to understand what is the capacity in their communities from an adult perspective to be able to provide support to their young people.

So you’re thinking of presenting this data to community change-makers in towns across the U.S.?

Exactly, yes, so that there can be community-wide action plans. The data we have also spans over many years, from 1970 through 2010; five decades of Census data. We have it down to the zip code level so that communities could use the data to plan for initiatives all the way down to the neighborhood level.

What’s the big story you’ve seen, in terms of that ratio, so far?

There’s great variation within cities, the rate of change both in positive and negative directions. We’re hopeful that people will use it to understand that there is great variation within their own city with the capacity that their community has. There definitely are places that are persistent in the level of, let’s say, not enough adults. There are also places with persistently enough adults. For us, we’re looking at educational outcomes. For example, in our findings, we found on average that a 1% increase in that ratio results in a 1% decrease in the rate of 16 to 19-year-olds who leave school before graduating. So it’s not just “oh, it’s [adult-to-youth ratios] interesting”. It’s an interesting idea, but does it actually have any relevance to the lives of young people, and what we’re finding is that, yes, it does.

And I understand that you are presenting this data at the 2016 Community Convention?

America’s Promise held its Community Convention this week, an invite-only gathering of local and state leaders from around the country who are committed and engaged in helping all young people thrive. In one of the sessions, I talked about the role of “adult capacity” in supporting young people, especially young people who are undergoing multiple adversities in their lives, and what role adults can play in those communities to help them succeed. I talked about the research we’ve done using this indicator, but also providing an example using the maps – thanks to Community Commons. By giving the public access to the map, which allows them to compare adult-to-youth ratios in neighborhoods by zip code, it is our hope that people can start to uncover adult capacity disparities within their own communities. This data can be a useful tool in helping to support the efforts of activists and leaders in the public, private and nonprofit sectors as they work to meet the needs of young people.

How Much Education Funding Was Spent on Classroom Instruction?
August 1, 2017