Why are there more tobacco stores in low-income neighborhoods and communities of color? In 2008, a team of young people from the Youth Leadership Institute (YLI) asked this question as they began to recognize disturbing patterns in where tobacco was sold throughout San Francisco. Why do the districts with the lowest median incomes have the most tobacco retailers? Why are so many tobacco stores packed together in neighborhoods with large populations of Latinos, Asians, or African Americans?

To better understand the problem, YLI worked with youth advocates living in areas dominated by tobacco retailers. They saw that neighborhoods with poor or nonwhite residents had significantly more tobacco retailers—and higher smoking rates—than wealthier or predominantly white areas with the same number of residents. The proliferation of tobacco stores in certain parts of the city was more than a public health issue. It was a social justice issue. 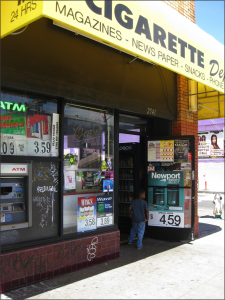 “The tobacco industry has done an exceptional job of targeting low-income communities and communities of color. It has produced an abundance of tobacco retailers near populations already overburdened by health issues,” said Derek Smith, Director of the San Francisco Tobacco-Free Project.

In partnership with adult allies, San Francisco youth framed the issue and led efforts to address it. The city already required tobacco retailers to obtain a permit to sell tobacco. But in 2014, with support from YLI and others, the city passed a landmark law to cut the number of tobacco permits—and therefore, the number of retailers—in half over time. Every district in the city will eventually have no more than 45 tobacco permits, ensuring no neighborhood has significantly more retailers than another. The law also prevents stores from clustering together and prohibits them from locating near schools.

The goal is to create a healthier, more equitable San Francisco. “The work to reduce the number and density of tobacco stores necessarily focuses on fairness and social justice,” said Smith. “This effort supports public health and addresses the visible health disparities that exist among the neighborhoods of our city.” 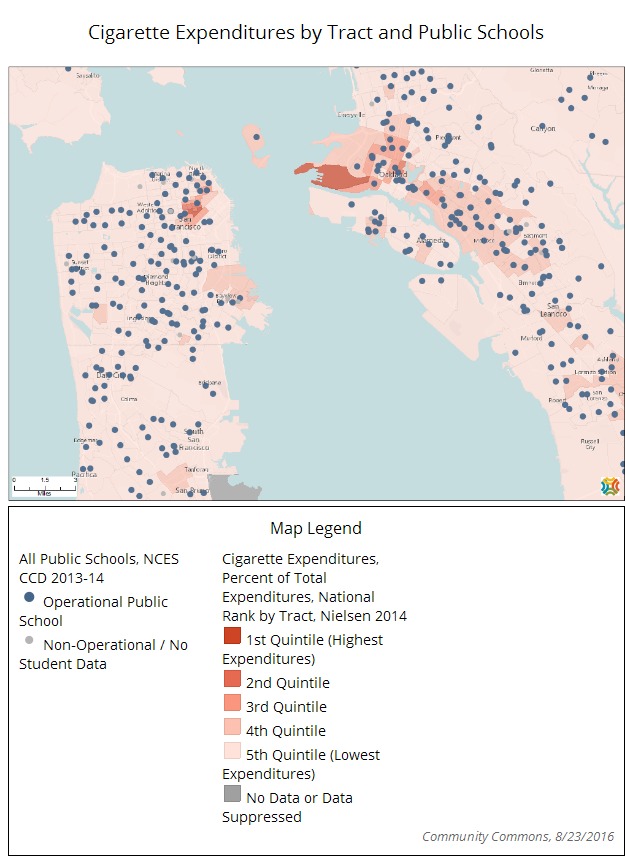 Why should we address tobacco retailer density?

Communities with many tobacco stores—and many stores located close together—often bear the brunt of tobacco use. Greater density and higher numbers of tobacco retailers, as well as retailers’ proximity to schools, have been associated with higher rates of youth smoking, higher rates of cigarettes smoked per day, and lower rates of quitting. Low-income areas and areas with many African American or Latino residents often have a higher concentration of tobacco stores. Not surprisingly, these communities suffer most from the negative health effects associated with tobacco use.

Reducing the density and number of tobacco retailers is a promising strategy for decreasing tobacco use and curbing tobacco marketing. It can promote health equity by focusing on communities and populations disproportionately burdened by the promotion and prevalence of tobacco products. In addition, restricting stores from locating near schools and other places where youth congregate can keep kids from starting and continuing to smoke.

“Proximity to schools is a huge issue. Many young people pick up smoking because every store they go to sells cigarettes, and they’re inundated with tobacco advertising and promotional offers,” said Smith.

By keeping the quantity and concentration of tobacco stores to a minimum, communities can counter the pressures facing residents—particularly those targeted by the tobacco industry—as a result of constant exposure to tobacco products.

How can we address tobacco retailer density?

Although communities throughout the country have experimented with policies to address the density of alcohol retailers, few have applied those strategies to tobacco control. Communities interested in reducing the number and density of tobacco stores have several policy options:

Local licensing and zoning regulations are common ways to implement these strategies. A community can easily mix and match these options and develop policies that complement one another. Work like this can help create places where tobacco use is the exception, not the norm.

In San Francisco, local efforts have quickly proven effective. The number of tobacco retailer permits dropped by 8% in the first ten months after the density policy took effect. Notably, the districts that started with the highest number of permits have experienced the most significant declines.

“Looking at the number and locations of stores in the city, we wanted to figure out how we could change what’s available,” said Smith. “We wanted to take a stand against the tobacco industry, and use policy to promote health and equity in our community.”

Ray Leung is a senior staff attorney at ChangeLab Solutions. He works in multiple program areas, including tobacco control, childhood obesity, and healthy housing. His tobacco control work includes policy development for healthy retail, tobacco store density, tobacco retailer licensing, e-cigarettes, and other emerging products. Before joining ChangeLab Solutions, Ray was the public policy attorney for the Philadelphia Department of Public Health, where he provided policy and legal counsel on many issues, including tobacco control, childhood obesity, and enforcement of public health laws.