Mapping Poverty in the Appalachian Region

The Appalachian region is home to hardworking individuals who value their families, community, and living in the natural beauty of one of America’s most beautiful regions. For generations, families have earned a living on jobs provided by the region’s primary industry- coal. In its heyday of the 1910s and 20s, more than 700,000 jobs were provided by the coal industry. In Appalachia, that number now hovers around 44,000 – with not much coming in to fill the void.

When the demise of the coal industry began in the 1940s, unemployment and poverty hit the region hard. Those with higher education went to other states for better jobs and higher wages- a trend we still see today, especially among young adults. More recently, the outsourcing of jobs overseas has caused soaring unemployment in a number of counties.

The outlook for coal is only expected to worsen as federal regulations, the decreasing cost of natural gas and the increasing costs of mining in the region continue. However, people in some of Appalachia’s most impoverished counties are coming up with their own ways of building a future without coal.

Still, poverty, unemployment, and low-paying wages persist. While communities across the US struggle with poverty, some of the most impoverished- and unnoticed- are in Appalachia. 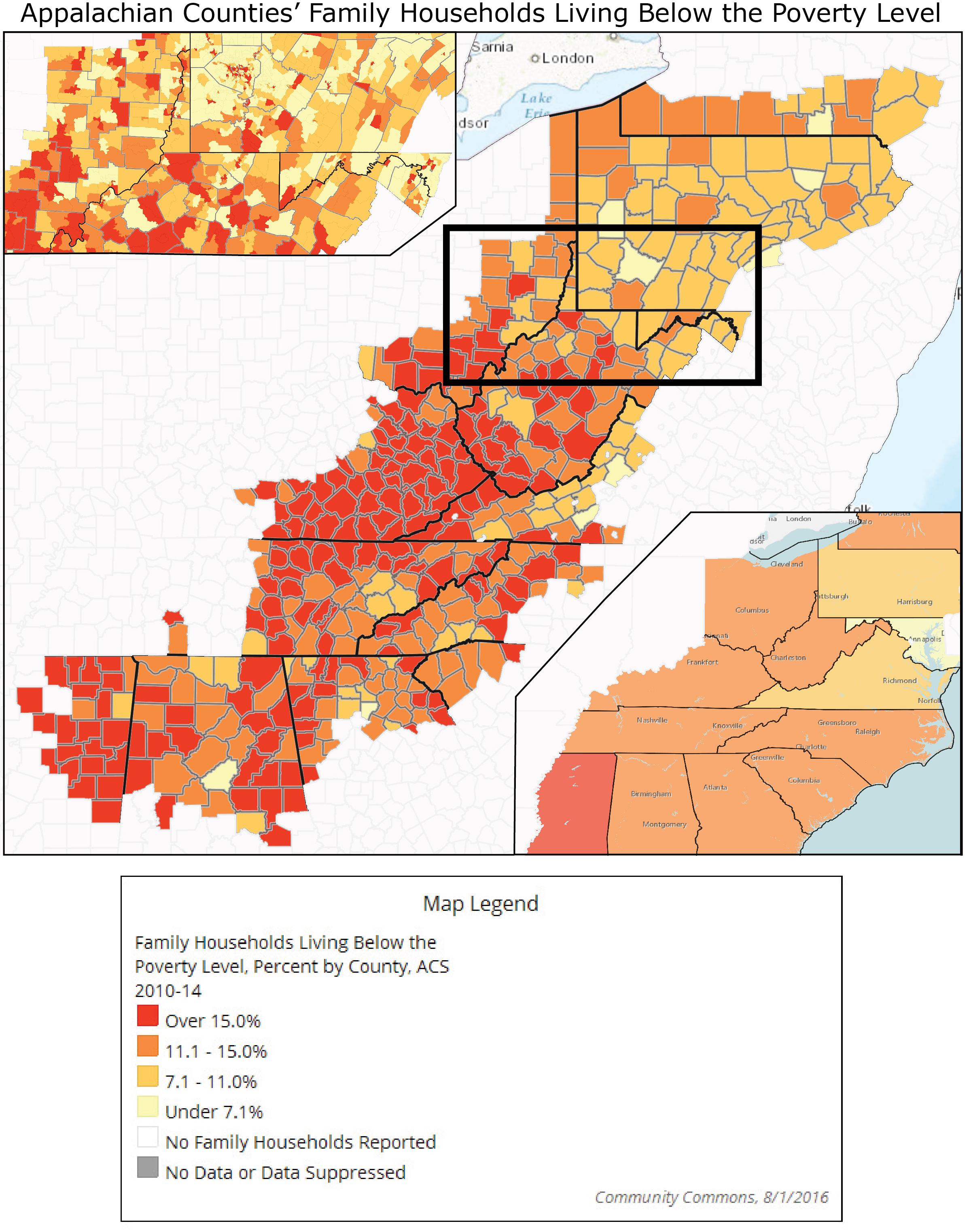 Unemployment in Appalachian Counties Relative to US Rate

Unemployment in the Appalachian region is 6.5 percent, and in the US it’s 6.2 percent. While this difference is not startling at first glance, when you look to specific counties, it becomes a much bigger issue. When coal companies and manufacturing plants close their doors, a jobs void affects workers in the surrounding areas. In Lewis County, KY, when Nine West shoe company closed their plant to move overseas, the county’s unemployment rate climbed to 12 percent. 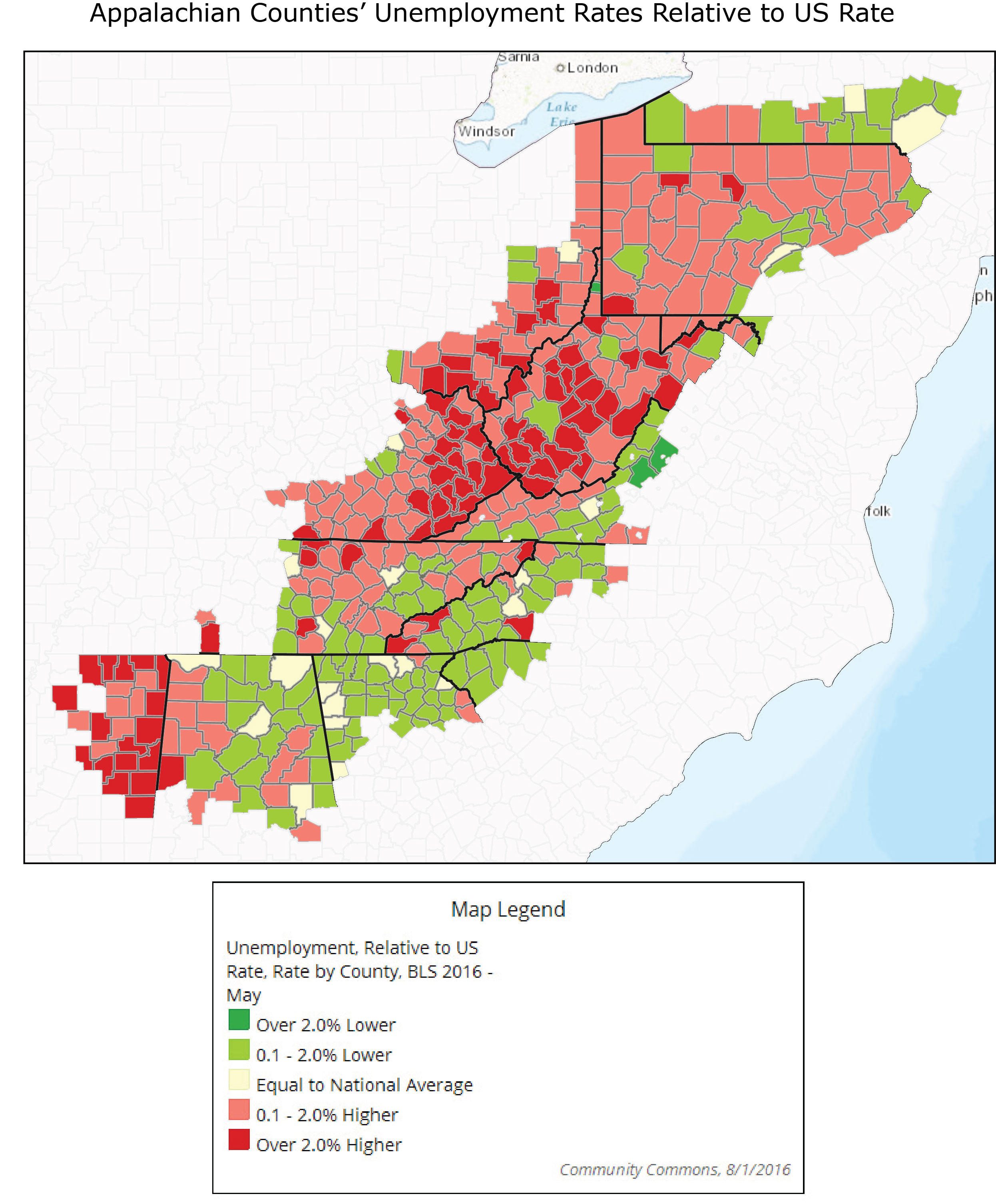 Unemployment is only one facet of the poverty in the region. As you can see from the map below, the Appalachian region has some of the lowest wages in the US. The average income in the Appalachian region is $37,260 and $46,049 in the US. What’s perhaps most telling is the labor market engagement map. It’s an index that describes the level of employment, labor force participation, and level of education in a census tract. Much of the region is plagued by poor labor market engagement, a direct reflection of poor job prospects and low wages. 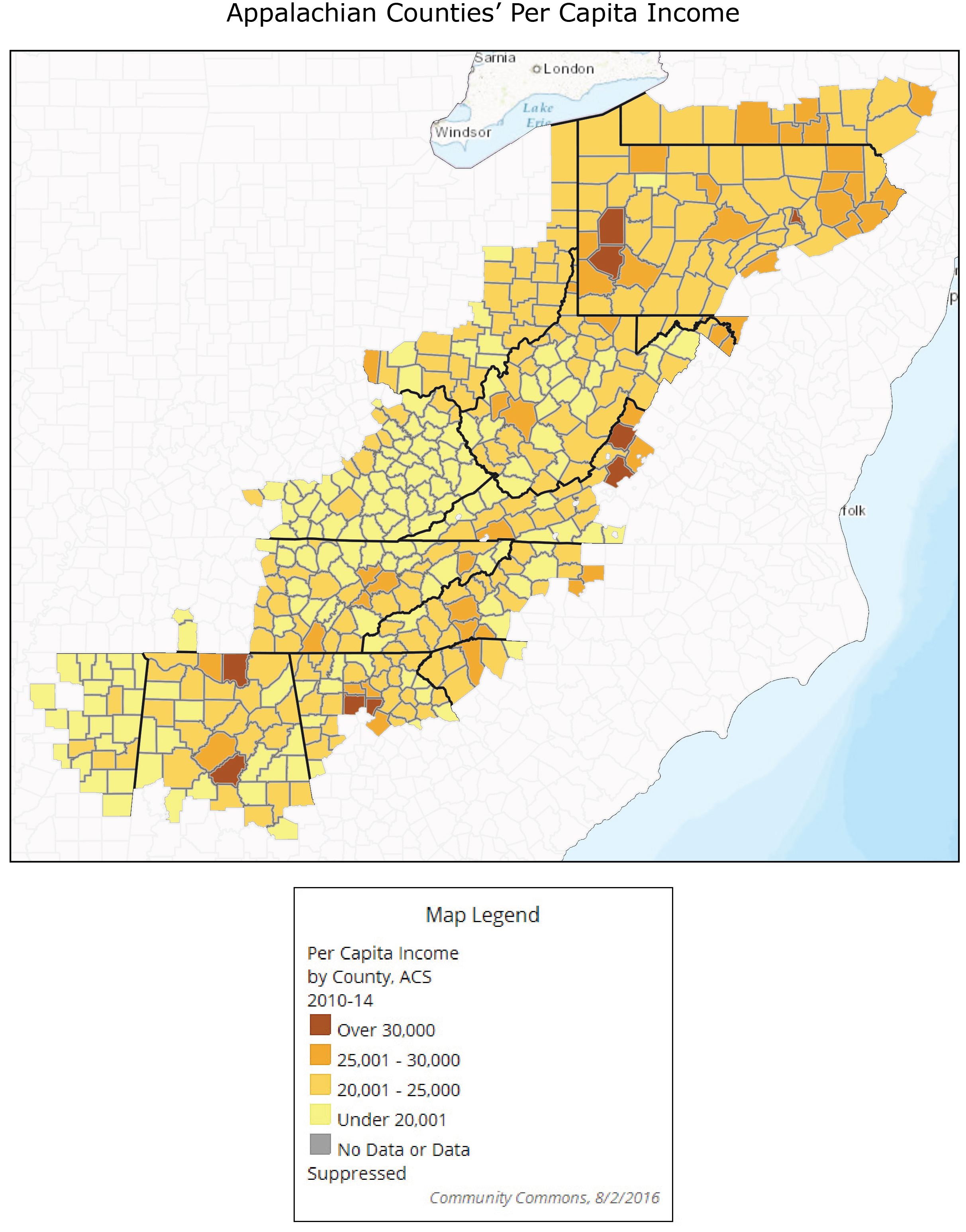 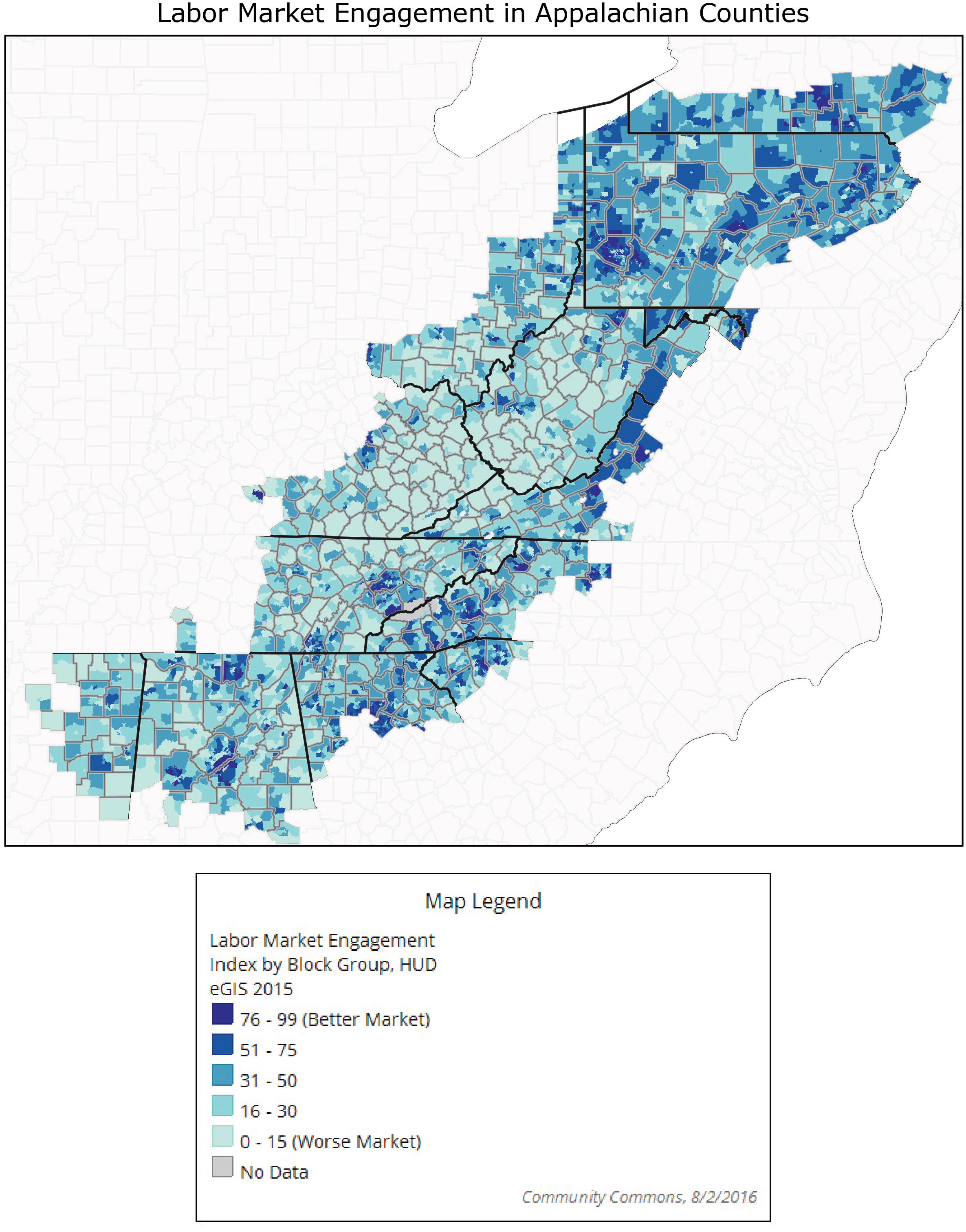 The data and statistics look disheartening, but fortunately one of the greatest assets the region has are its people.

In an interview with The Atlantic, Peter Hillie, President of the Mountain Association for Community Economic Development (MACED) says unlike the past, Appalachia’s future prosperity will require more than one industry to come in and save the region, “There’s not a silver bullet,” he said, “There’s just a lot of little silver BBs.” One of those BBs is getting young people to stay.

In the same interview, Ada Smith from Lechter County, KY said “For people who grow up here or have roots in this place, parents and grandparents who know there’s not a lot of opportunity here encourage their loved ones to go and find jobs elsewhere.” Some counties are beginning to see the return of young people who left. One man returned from Louisville to open a tattoo parlor, others have opened restaurants, t-shirt companies and record shops. With a loan from MACED, one former coal miner even bought sheep from Vermont to start his own business- Good Shepherd Cheese.

Perhaps most inspiring is the work done by Smith and other young people from Appalachian states. Dismayed by the perception that staying in poor Appalachia counties is equated with failure, the group created Stay Together Appalachian Youth (STAY). Made up of young people from Appalachian states, the group discusses how they can better their local communities and work to encourage other young people to stay and work towards the same goal. “I feel like people are having conversations and willing to try different things that they never would have before,” Smith said. The enthusiasm for the movement is catching on, as more young people are moving to Whitesburg (where Smith lives) for the sense of community among other young adults that live there.

Building prosperity in Appalachia requires a homegrown effort, with commitments and investments from everyone. It needs people thinking about how they can work across county lines and state lines to move forward as a region –with its young people as the catalyst.