Engaging Neighborhoods Through Maps and Stories

This article was originally posted on April 11, 2016 by Natasha Freidus, Co-Director of Creative Narrations, and published on their blog. The Community Commons mapping and reporting technology is embedded in the Healthier Together web initiative.

Recently, a team consisting of staff from Creative Narrations and Community Commons spent two intensive days at the Palm Healthcare Foundation for training and planning next steps for the Healthier Together initiative.  The Healthier Together website was launched a year ago with the intent of creating a mapping tool designed to track community’s progress towards improving health through qualitative and quantitative data.

The training team had spent a few weeks planning for this workshop. We had powerpoints, facilitator agendas, strategy exercises, and tutorials galore. We knew that there would be a mix of brand-new staff who had never used the website before as well as a few who had gone through introductory trainings with us over the past year.

Through the first morning, it became glaringly clear that we had glossed over a critical step. Our focus for the two days had been the technology, the ins and outs of using the mapping software. Making a map, however, is like telling a story.  You can have all the bells and whistles, but the special effects don’t matter if you don’t have a message.

Our map-makers hadn’t considered what story they wanted to tell.

We regrouped over lunch, and made a decision on the fly to introduce workshop participants to The Right Question Project. Both Morgan and I have worked closely with this group in the past. We’re big fans of their Question Formulation Technique that allows people to take a step back and figure out what questions they want to tackle before engaging in action.

The workshop participants divided up by geographic community, a few from each one. They began by generating questions around what they wanted to learn about improving health in their communities. They learned how to change close-ended questions to open-ended, and decided on priority questions.

From questions to data

Once the communities had decided on their questions, we asked each group to come up with what kinds of data could help them answer the question. We asked them to think broadly and then categorize their responses into two areas:

This was a crash course, and an area we hadn’t even anticipated tackling. Ideally, the group could have spent all day doing the above two activities. But for this time, we crammed it into about an hour and a half before turning to the mapping website. By this point, each community had an idea of what kind of questions they were looking to answer, and what kind of data could give them a clearer picture of their community.

At that point, we turned the show over to Erin Barbaro, mapmaker extraordinaire, who took us through an overview of the Community Commons platform. Community Commons is the mapping tool that operates on the backend of the Healthier Together site. Participants had the chance to play with thousands of data-sets and try their hand at uploading their own data-sets in the forms of Excel spreadsheets.

On the final day we turned from maps to stories. We presented a few different samples of how groups have used stories as a form of data – and had a chance to tell our own stories.  Our next task was to look at how to take “non-traditional forms of data”, e.g., videos, images, quotes, etc. and add them to the story layer. 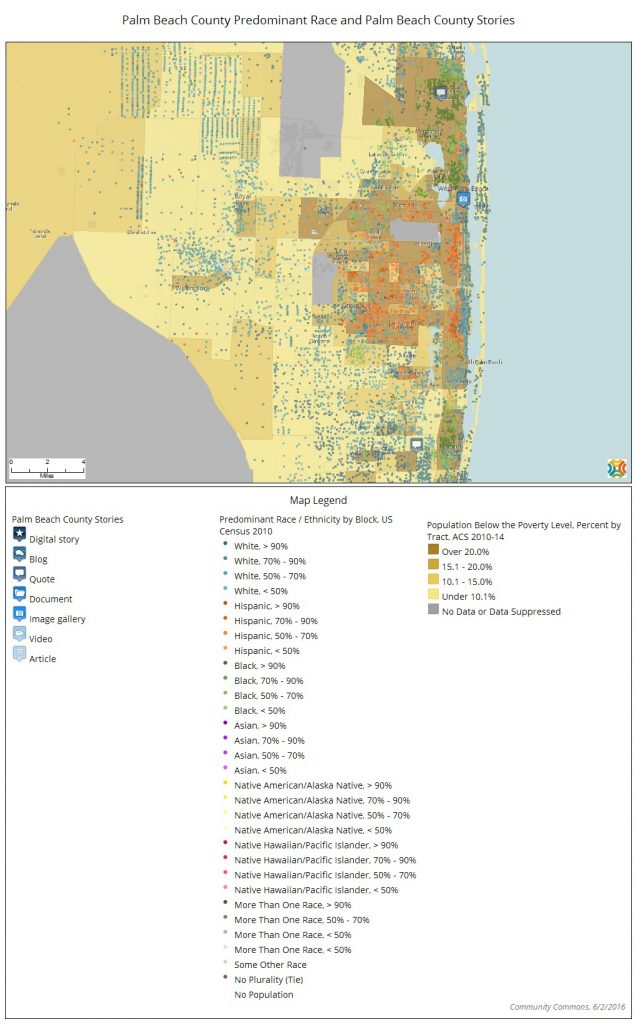 I have a little theory about technology. I find that things generally go wrong when we’re tired. I mean, our computers somehow sense that we are maxed out and should really get off of them, so they stop working. I’m not sure if that was why our server seemed to stall out, but the upshot is we had to close down the laptops, put off the story layer, and talk strategy. I’m sure those quotes will get onto the map at a later date, but in the meantime, we had a very constructive discussion on next steps for the site and how to improve the process for users.

A tool is only as effective if its usable. As Healthier Together has gotten off the ground in the past year, we’ve found that the true potential of the website has been untapped. Everyone was very enthusiastic about the value of spending two days together, face to face, to really talk through what is working, get a bit of inspiration and context from other parts of the country and to increase engagement. On our end, we plan to highlight useful datasets and streamline the mapmaking process. On the users’ end they are going to look at increasing accountability and making sure that capturing data is built into their strategic plans.