We’ve seen the research that routinely promotes physical activity as fundamental to our health. Walking and/or biking when and where we can is one of the most cited ways to improve overall health. But to do so, we need safe, accessible areas. And that is where the role of the state comes in. States can enact laws and policies that can make or break something so basic as walking to school.

That’s why Safe Routes to School National Partnership recently released a report that grades each state on how they support walking, biking, and physical activity policies.  It’s a cool way to assess where states are, but also clearly highlights specific areas for improvement.

So, is your state making strides with walking/biking policies or is it just starting to lace up? 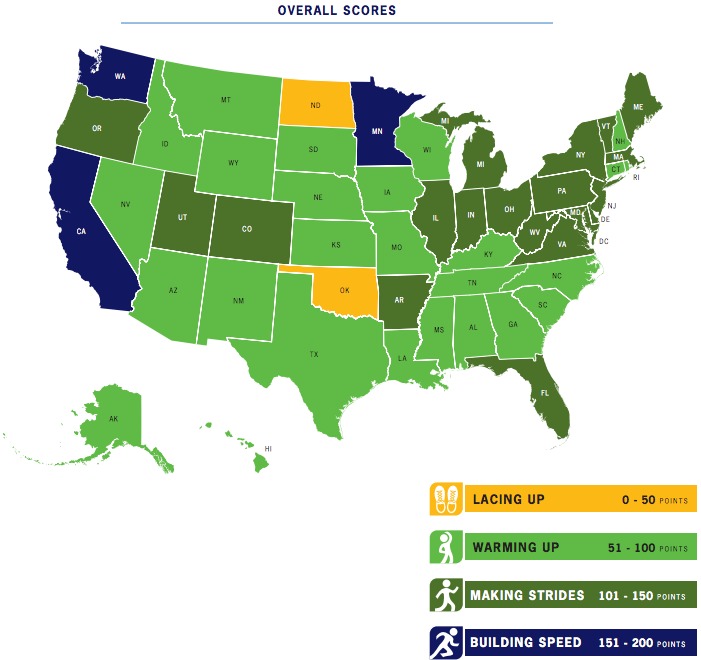 Click the map image to see each states report card

Some regions were stronger in key areas than others. For example, the South had higher scores in the Complete Streets/Active Transportation key area. Alternatively, those scores were a much lower for the Mountain West. Overall, states are making progress in their own way – but each with plenty of room for improvement.

Walking and Biking to Work by State

In the U.S., 3.37 percent of the population bikes or walks to work. That number has been steadily rising for bike commuters over the past several years, according to the U.S. Census Bureau. And though 13 percent of kids (5-14 years old) walk or bike to school, that number has dropped 50 percent since 1969. There are many factors at-play in that decrease like distance to school, traffic concerns, weather, crime, and even opposing school policies. So it’s encouraging to see the Safe Routes to School and Complete Streets/Active Transportation/Active key areas score the highest in almost all the regions – another sign that communities (and schools) are shifting attitudes about the importance of livable and complete streets to residents’ health. 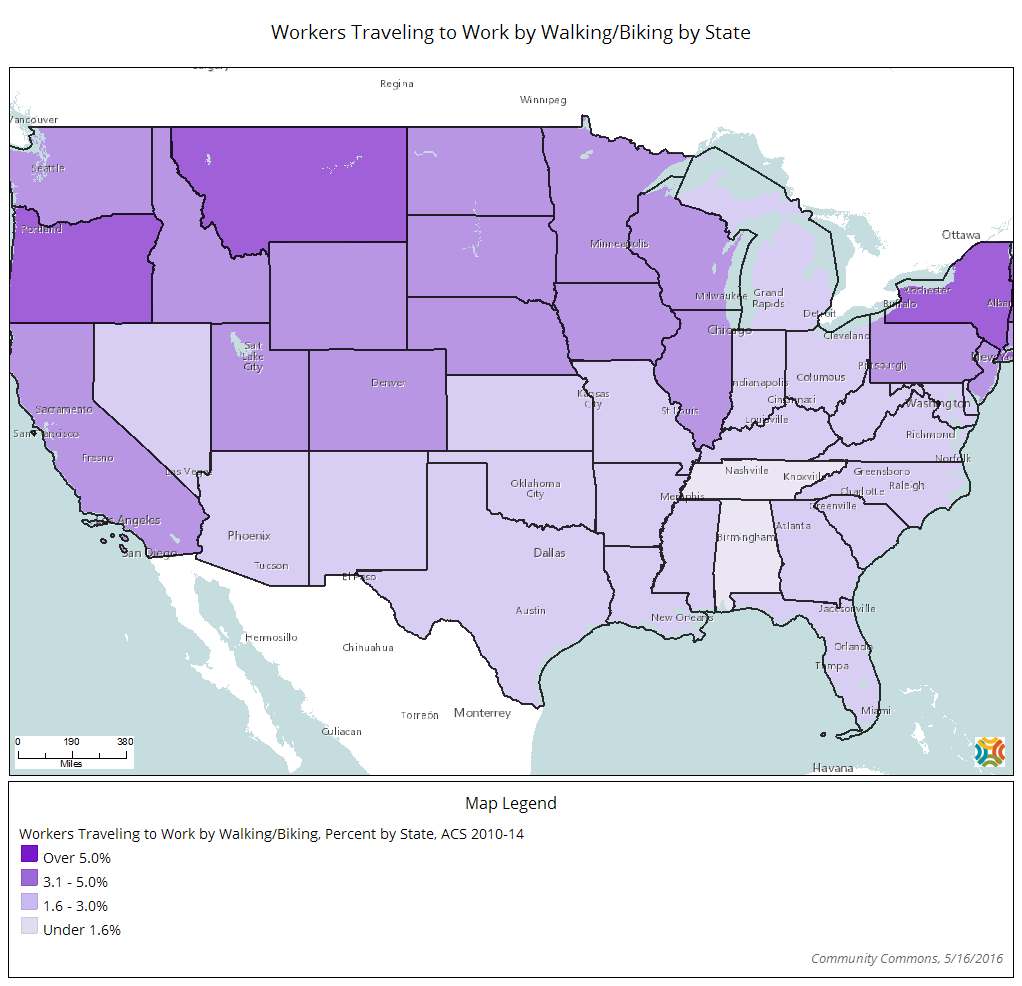 Beyond the health-related reasons for active transportation policies, there’s sometimes a perception on what kinds of people bike and walk to work. People often think that those with higher education and higher incomes walk and bike to work more than others. Maybe they are thought of as being more health conscious. But that’s not necessarily true. As the U.S. Census Bureau reported, while those with more education do use more forms of active transportation, those with the lowest income are actually more likely to bike or walk to work. So it’s important to remember that for many people, walking or biking to work is not always a choice, it’s a necessity.

For kids, safe routes to school opens doors to much needed physical activity. Research shows kids who bike or walk to school not only have lower body mass index, but also improved overall physical and mental health. But for kids and adults to take advantage of the health and economic benefits of walking or biking to work, they need safe, active transportation routes. That’s why states and communities need to not only understand the implications of active transportation policies, but also have a clear vision of who they are building for and how they can build in a way that fosters strong, accessible communities for everyone.