Mobilizing to Overcome the ‘Geography of Inequality’

In St. Louis, being born in zip code 63105 or zip code 63106 can make all the difference in the path your life takes, including how long you

live. That was one of the main findings from the For Sake of All project report released in May 2014. What it highlights is deep structural and systemic changes that need to happen. And that is why Dr. Purnell and his team are looking beyond just health outcomes, but to broader measures like education, poverty, and employment, that can impact life outcomes. Now in its second phase, the project is seeking to mobilize multi-disciplinary teams of business leaders, policy makers, and communities to support the report’s six areas of recommendation for change in St. Louis. Dr. Purnell discusses details of the project below.

Thanks for joining us Dr. Purnell. Could you tell us about the start of For the Sake of All and its long-term goals?

The project started in March 2013. The first phase was a partnership between scholars at Washington University and St. Louis University. The goals were to inform the public and policy makers about the social determinants of health and healthy disparities and really to talk about the health and economic impact of these disparities, how it affects everyone in the community, and to attempt to take the conversation beyond just personal responsibility and medical care.

What was the reason for emphasizing more than just personal responsibility and medical care?

There have been previous studies on health disparities, just looking at the differences in health outcomes, but what we know in public health is actually having an impact on population health requires not just health care but also education, income, and quality neighborhoods – things that happen outside the health sector. You have to mobilize people and resources beyond just health.

The project looks at the health and well being of African Americans in St. Louis. What challenges do they face?

Easily the most quoted statistic we have is the 18-year gap in life expectancy between predominately African Americans in the north city zip code (63106) and the largely white zip code less than 10 miles to west in Clayton (63105). Look at the differences between those two zip codes:

So the way I’ve described it is health and the factors that support health are not equally distributed throughout the St. Louis region. 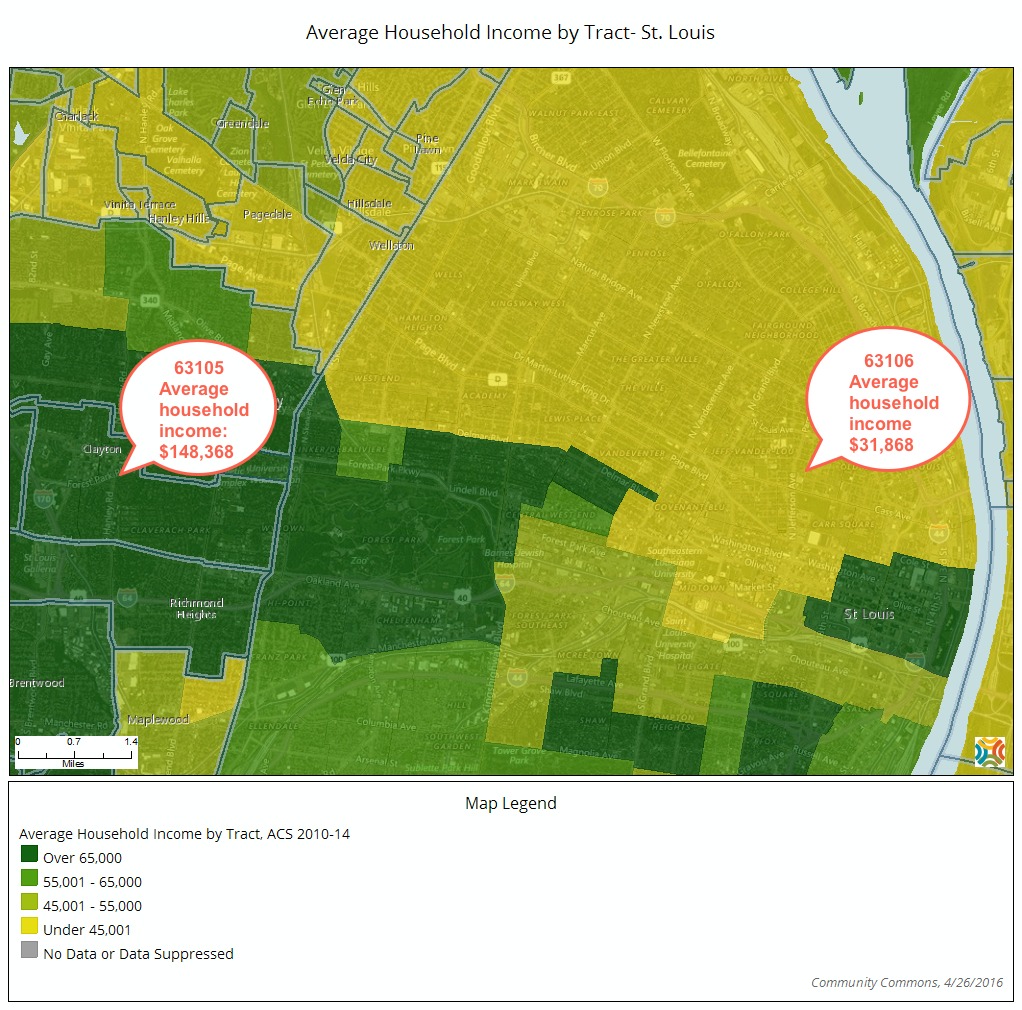 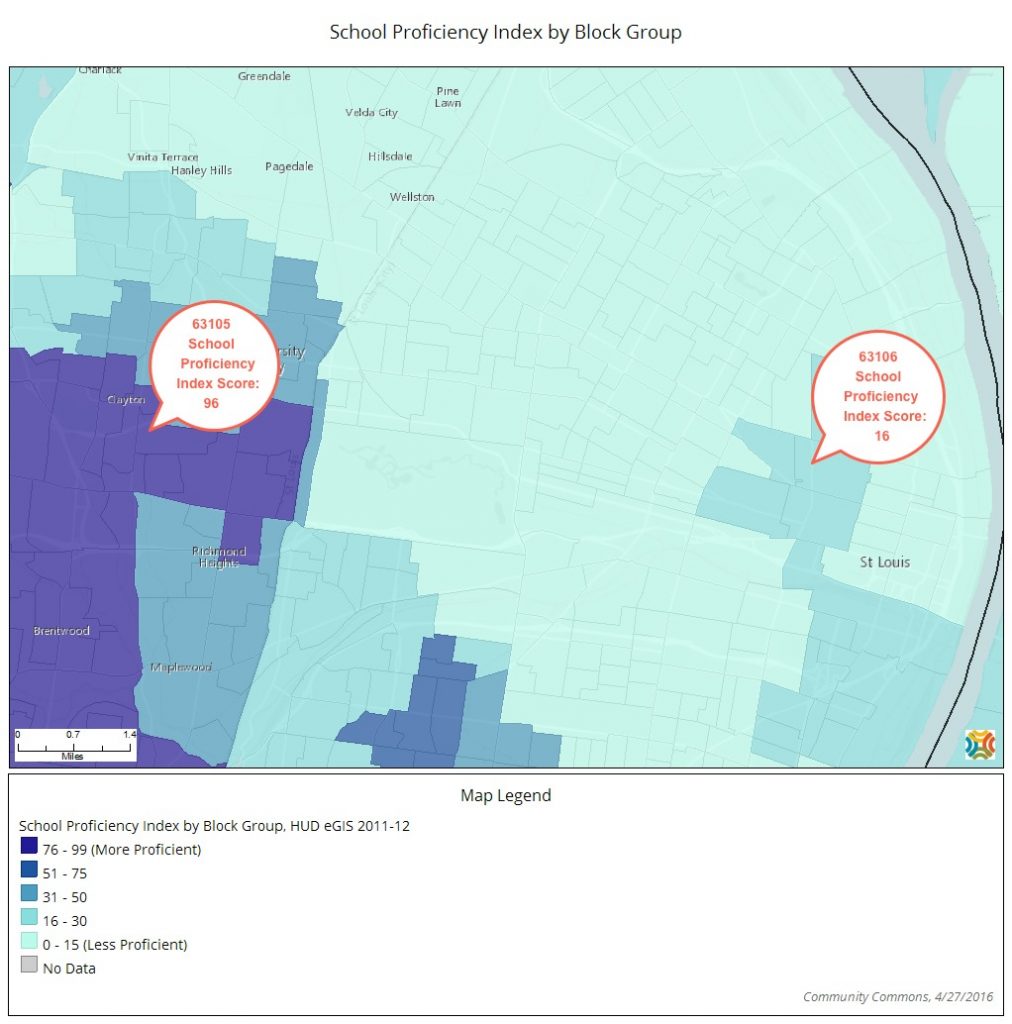 Did the events in Ferguson, MO bring more attention to these disparities?

The report was released in May 2014 and was already beginning to get attention, but I would say the events of Ferguson amplified what we had already reported. I think people in St. Louis are now more perceptive to the notion that this is going to require structural and systemic changes.

There’s a lot of data that helps inform projects, but there’s also a wealth of data that each project creates. How are you using data to tell the story in a way that the public can understand?

We’ve been conscious of the fact that when you have as broad of an audience as we do, different people will respond to different aspects of the data.

We were very conscious about making this information accessible. We use lots of infographics; we work with a professional design firm. The discussion guides and action toolkits are highly accessible, attractive, and easy to look at and read. We’ve also used different ways of telling the story. There’s an infographic that tells the story of a little girl named Jasmine that shows the two life trajectories – one in which she has resources and one in which she doesn’t. It’s now animated and the video is on our website. We created another video in partnership with St. Louis Public Radio called “The Gateway Gauntlet” that recently won a Telly Award for non-broadcast video production.

Check out the award-winning video, “The Gateway Gauntlet”, below.

I think there is a really nice complementary focus between what we are trying to do For the Sake of All and what you do at Community Commons, trying to make data accessible to communities so they can plan to make improvements.

Now that attention is on these issues, what are the next steps?

We’re now in the second phase of this work, which is more about educating the public and mobilizing people around our 6 areas of recommendations. So we’ve had a little over 600 residents from sixty-three zip codes attend our community action forums. We’ve developed discussion guides and toolkits – those have been downloaded over 2,000 times, the website has been visited 75,000 times by 25, 000 visitors- not just in the U.S. but also from 125 countries. So, we’ve had reach and media attention. But now we’ve got to pivot towards capitalizing on the awareness and translating into action.

I saw you discuss the report at a community meeting with Former Secretary of State Hillary Clinton on C-Span. That’s a great way to capitalize on awareness! What was that experience like?

It was an incredible experience. I was invited to attend by Reverend Traci Blackmon who has been very active in the Ferguson protests in support of young people. She asked me to provide Secretary Clinton with a broad overview of the issues in St. Louis and the work we have done through For the Sake of All. Afterwards I was actually able to hand her a copy of the report and I think it helps to give her a sense of the issues we we’re facing but also the action that we are prepared to take in St. Louis.

As you said in your discussion, disparities affect everyone in the community, regardless of race or socioeconomic status; so, moving forward, who needs to be involved in finding solutions to these problems and how are you mobilizing them?

We need literally all hands on deck. We were really excited in February to bring together 100 key stakeholders in 8 different strategy areas that represented government, philanthropy, education, health, non-profit, advocacy, and academia. It’s truly cross sector, multi-disciplinary work. They spent time working on implementation plans. They were lead by facilitators from BJC Health Care, one of our biggest health care organizations in St. Louis, leading teams through initial implementation planning. It requires everyone- all sectors all segments of the community – to get this work done.

For updates, toolkits, discussion guides, or more information visit the For Sake of All website.

Jason Q. Purnell, PhD, MPH, is an Assistant Professor in the Brown School at Washington University in St. Louis. He leads the Missouri Health Foundation-funded project, For the Sake of All. The project focuses on the health and well being of African Americans in St. Louis.

Image of Dr. Purnell courtesy of the Brown School at Washington University in St. Louis.