America’s “Worst City for Walking” Gets Back on its Feet

The following was originally published at JayWalljasper.com and written by Jay Walljasper.

The US gave up on walking in the mid-20th Century—at least planners and politicians did. People on foot were virtually banished from newly constructed neighborhoods.  Experts assured us that cars and buses (and eventually helicopters and jet packs) would efficiently take us everywhere we wanted to go.

Thankfully, most Americans refused to stop walking.  Today —even after seventy years of auto-centered transportation policies—more than 10 percent of all trips are on foot, according to Paul Herberling of the US Department of Transportation. That number rises to 28 percent for trips under one mile.

Indeed, we are in the midst of a walking renaissance as millions of people discover a daily stroll can prevent disease, boost energy, ease stress, connect us with our communities, and is just plain fun.  The number of us who regularly take a walk has risen six percent in the last decade, according to the US Centers for Disease Control and Prevention. According to a new study from the National Association of Realtors, 79 percent of Americans–even higher for those under 35 –want to live in a place that’s walkable.

Walking’s popularity is now reaching beyond older city neighborhoods into suburbs and the Sun Belt.

Even Oklahoma City—which was named as the “worst US walking city” in a 2008 study of 500 communities by Prevention magazine and the American Podiatric Medical Association—is embarking on big plans to become more walkable.

“Bleak” is how Jeff Speck, urban planner and author of Walkable City, describes walking in Oklahoma City seven years ago.  “Traffic sped too fast…for pedestrians to feel comfortable on the sidewalks…oversized traffic lanes encouraged highway speeds,” he wrote in Planning magazine. Oklahoma City also suffered from perhaps the worst sidewalk network in America.  Most other towns conscientiously built sidewalks until the 1950s, but Oklahoma City abandoned the effort as early as the 1930s in some neighborhoods.

Mick Cornett, the city’s Republican mayor since 2004, notes, “We had built an incredible quality of life, if you happened to be a car. But if you were a person, you were seemingly combating the car all day.”

“We probably were last in the country for walking,” Cornett admits. 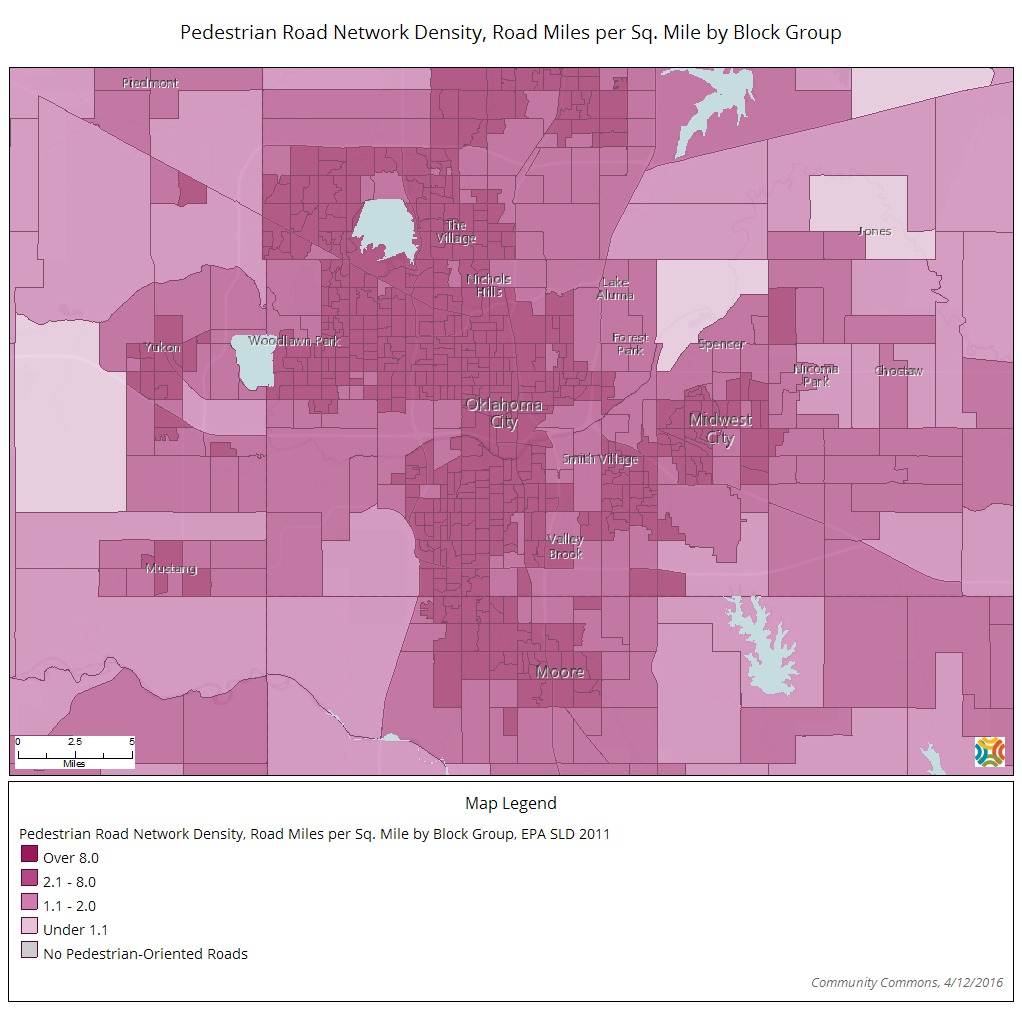 This rock-bottom rating really stung in a community that had earlier been passed over by United Airlines as the site for a new maintenance facility because, despite the city’s generous financial incentives, the company’s CEO said he couldn’t imagine asking his managers to move to Oklahoma City.

Then, a year after the walk rankings, the city again found itself in the harsh glare of unwanted media attention.  This time Men’s Fitness magazine stigmatized Oklahoma City as the “#2 fattest city” in America. Among the country’s 100 largest cities, only Miami was more corpulent.

That’s all changing now. An ambitious $18-million sidewalk improvement fund was approved by voters as part of a tax increase that also included money for parks, transit, bike trails and senior wellness centers around town.  Four busy streets heading into downtown are now being narrowed, with new “smart intersections” that provide walkers more safety with “refuge island” medians in the middle of streets and clearly marked crosswalks.

So what’s driving all this pedestrian progress?

Mayor Cornett, a former sportscaster, bristled at his city being called fat and sedentary.  Yet he knew that he couldn’t credibly deny these charges since he’d gained enough extra pounds while in office to be labeled obese, thanks to endless rounds of breakfast and lunch meetings.

Cornett launched an initiative to get the city back in shape. Over the past seven years, he notes, Oklahoma City has added hundreds of miles of new sidewalks, built eight miles of bike lanes on the streets (there were none in 2008), added 100 more miles to the recreational trail network, built new gyms at many public schools, created a public rowing center and started work on an whitewater kayak and rafting course on the Oklahoma River.  Low-income neighborhoods, where health and obesity issues are most severe, are the biggest focus of the city’s programs for healthy eating and active living.

Cornett also issued a successful Challenge for Oklahoma City residents to lose one million pounds. Over 47,000 people signed up, and lost on average 20 pounds.  Cornett himself shed 38.

One major thrust of this campaign was working with fast food restaurant to offer healthier menus. Cornett is proud of this partnership and during our interview slipped into his office closet to fetch a life-size cardboard cut-out of himself posing with Taco Bell’s low-fat options, which was displayed in the chain’s 40 Oklahoma City restaurants.

This all seems to be making a difference—the growth in Oklahoma City’s obesity rate has slowed significantly from six percent annually to one percent, with the stage set for reductions in the future.

Click on the interactive map to see what this data looks like for your own community or visit our Map Room to create your own maps.

The mayor is quick to share credit. First and foremost, he applauds local citizens, who in 2010 voted to continue a one-cent addition to the sales tax for seven more years to pay for health initiatives.  Oklahoma, he points out, is a very conservative state—the only one where Obama did not carry a single county in either 2008 or 2012.  Yet Oklahomans are willing to support taxes when they know where their money is going. “They like projects where they can see the results,” he points out.  “And this is not debt and it’s not a permanent tax–it’s up for renewal every few years.”

Cornett views this spending as a smart business move, noting that the 2010 tax referendum, and two earlier ones under previous mayors focusing on downtown revitalization, public education and overall quality of life, amassed $2 billion in public investment which in turn spawned $6 billion more in private development.

“Ever since we decided to make this a great place for people to live, the jobs started coming here and young Millennials, who want to bike and walk, are arriving in numbers we’ve never seen before,” he says. “We are creating a city where your kids and grandkids will choose to stay.  They used to go to Dallas or Houston.”

“It turned out that one thing people—especially young people—wanted was better sidewalks,” Cornett explains.  That’s why the city now builds new sidewalks as part of most repaving projects and kicks in half the cost for any homeowner or neighborhood that wants them. Developers are now required to provide sidewalks in all new projects. As for the $18 million earmarked for sidewalks from sales tax revenue, “most of it goes where we know we need sidewalks, connecting schools and shopping centers with neighborhoods,” the mayor says.

While most people consider walking essential to a good neighborhood, there’s still a lot of opposition. “We hear from those who say, ‘We don’t need sidewalks, because no one walks here,’” Cornett says, noting that the absence of sidewalks is a big reason people don’t walk.

The city is in the early stages of initiating a Safe Routes to Schools program, making it possible for more school kids to walk or bike, and a Vision Zero campaign, aimed at eliminating all traffic fatalities in the city, says Dennis Blind of the city’s planning department.  The city also holds Open Streets events—festivals where a street is blocked off to vehicles so people of all ages can reclaim the streets (temporarily) as public space.

“We’ve come a long ways in a short time,” says Cristina Fernandez, who moved from Santa Monica—one of the most walkable communities in California—for an executive position at a local firm. “But we still have a long ways to go.”

Walkscore, which rates the walkability of any address in America, still ranks Oklahoma City in the lower 15 percent of cities over 200,000, which is nonetheless a big improvement over last place. The city’s low score can be partly explained by the fact that sprawling subdivisions, which would be classified as separate municipalities elsewhere, are inside the city limits here.

The epicenter of walking in Oklahoma City is downtown and nearby neighborhoods, which exhibit all the signs of urban vitality: sidewalk cafes, new loft apartments, refurbished old neighborhoods with local business districts, indie shops and restaurants, nightlife, sports and entertainment venues, well-populated parks, riverside bike trails, and sidewalks alive with people of all ages walking between all these spots.

An old warehouse district with a pedestrian promenade along a canal thrums with activity. A 70-acre central park is being developed that will connect downtown with a largely Latino neighborhood on the South Side via a new pedestrian bridge. A streetcar line debuts later this year that will loop through many of these neighborhoods. Protected bike lanes, which physically separate bicyclists and pedestrians from rushing traffic, will soon appear on major arteries coming in and out of downtown.

Oklahoma City’s mission now is to widen the walkable section of the city outward.  Local transit service has been improved (including new Sunday and evening buses), resulting in a sizable jump in ridership.  The Wheeler District, a new pedestrian-focused infill neighborhood south of downtown, breaks ground this year with plans to create 2000 homes.

North of downtown, things are already picking up.  “You have a lot of young people moving into the area because they can walk,” says Fernandez, who lives in the Crown Heights neighborhood.  Business districts scattered throughout this part of town, some of which once harbored crack houses and brothels, now flourish with restaurants and shops catering to local residents.

Fernandez, her husband and kids are still waiting for sidewalks on their street but already are walking more “because there are now more places to walk to.”  An attractive streetscape to improve the pedestrian ambience of the Western Avenue business district near their home makes walking more fun.

“When we go anywhere in the neighborhood now, we usually go on foot,” she says.

Jay Walljasper writes regularly about public health and healthy communities.  The former editor of Utne Reader, he is author of The Great Neighborhood Book. His website is JayWalljasper.com.