Part of our continuing series on walking equity by Jay Walljasper.

Discussions throughout the second National Walking Summit, held this past fall in Washington, D.C., brought forth new ideas for dealing with complicated issues: How to ensure that no Americans are denied the health benefits of walking and other physical activity. How to overcome the barriers—from crime in the streets to people’s long working hours—that make walking difficult for low-income Americans. How to make sure that gentrification doesn’t force people out of neighborhoods that are becoming more walkable.

In the San Joaquin Valley of California, where one in three children are overweight, Latina women started walking groups to improve their families’ health. When local officials said it would cost too much to build walking trails, they enlisted their construction-worker husbands to do it. The next step is for the community to understand how to make walking safer and more comfortable, says Genoveva Islas of the grassroots group Cultiva La Salud (“Cultivating Health”). They are now studying how traffic calming, bike lanes and sidewalk networks can improve their lives.

In nearby Ceres, California, where two-thirds of all people are overweight, sixth-graders did an assessment of walking conditions near local schools. Their recommendations were incorporated into a Safe Routes to Schools masterplan for the community. Five local schools have established Walking School Buses, in which parents go from door to door picking up kids and walking them safely to school. 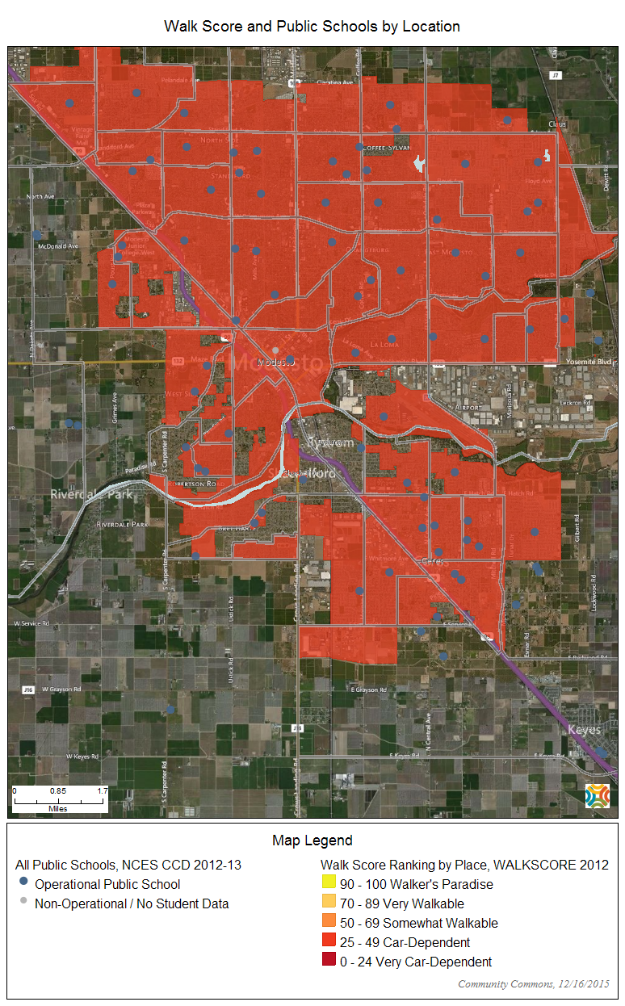 Maps like these visually tell the story of a community and its health.

In Clarksdale, Mississippi, older African-Americans who felt scared to walk because of crime, organized 14 neighborhood watch groups to make their community safer. “Folks barricaded themselves in their homes,” explained Ivory Craig, associate state AARP director, but came out on a special Meet Your Neighbor Night, where they decided to do something to make their neighborhoods more walkable.

In Raleigh, North Carolina, graduate student Matt Tomasulo created signs informing people how easy it is to walk to local attractions, which were later adopted by the city government. “It was a way to build a lot of excitement about walkability very quickly,” he says.

“Does walkability and safe communities automatically mean gentrification?” inquired Jill Chamberlain of Blue Cross and Blue Shield of Minnesota. Investments in parks and trails almost always mean higher real estate prices, she noted. “But if you want to stop gentrification, one idea is [public] contracts with developers to include permanent affordable housing.”

“The Summit shows the movement is expanding from walking as a way to improve public health to walking as a human and civil right, a moral imperative,” said Kate Kraft, National Coalition Director for America Walks and the Every Body Walk! Collaborative. “A community that is walkable for everyone means less disenfranchisement and more connection.”

“We are a nation of walkers,” said Surgeon General Vivek Murthy. “Going back to King’s March on Washington and the 1913 march for women’s suffrage.”

Sims’ optimism is grounded in firm evidence that Americans are getting back on their feet. The number of Americans walking has increased 6 percent since 2005, according to the Centers for Disease Control and Prevention. That adds up to 20 million more people on sidewalks and trails.

Americans are walking not just for health, but also for relaxation, community connection, neighborhood revitalization, some time in nature, and the sheer fun of it. The co-chairs of the Every Body Walk! Collaborative—Joan Dorn of the City University of New York School of Medicine and Kevin Mills of the Rails-to-Trails Conservancy—outlined some of the reasons for this good news:

Read Jay Walljasper’s previous walking equity series and his more recent Health Benefits of Walking Are So Huge, Let’s Make Sure Everyone Can Do It.

Jay Walljasper—author of The Great Neighborhood Book—consults, writes and speaks about how to create healthy, strong communities. He is Urban Writer in Residence at Augsburg College in Minneapolis, and can be reached at JayWalljasper.com.