How the Census Bureau Measures Income and Poverty

Income, poverty and health insurance statistics for 2014 from the Current Population Survey Annual Social and Economic Supplement (CPS ASEC) were released on Wednesday, Sept. 16, 2015. One-year statistics from the 2014 American Community Survey (ACS) were then be released on Thursday, Sept. 17, 2015.

In all likelihood, the national statistics from these two sources will not be identical. Why not? Which is correct? Well, it’s complicated.

The Current Population Survey is conducted every month and serves as the nation’s primary source of statistics on labor force characteristics. Supplements are added in most months; the Annual Social and Economic Supplement to the survey provides the official annual statistics on the nation’s poverty levels as well as statistics on income, age, sex, race, marital status,educational attainment, employee benefits, work schedules, school enrollment, health insurance, non-cash benefits and migration.

The American Community Survey, on the other hand, is the only source of small-area statistics available on a wide range of important social and economic characteristics for all communities in the country. In addition to income, poverty and health insurance, other topics include education, language ability, the foreign-born population, marital status, migration, homeownership, the cost and value of our homes and many more.Statistics from these two surveys differ for multiple reasons. First, income questions on the CPS ASEC are much more detailed than the summary questions asked on the American Community Survey. For the CPS ASEC, trained interviewers administer the survey while people primarily respond to ACS questions over the Internet or by mail. (Trained interviewers follow up with households who do not respond to the ACS online or by mail.)

Second, the reference periods for the two surveys are very different. The CPS ASEC asks respondents to report on their income in the previous calendar year. The ACS asks about income in the prior 12 months. Since the ACS is a continuous survey administered throughout the year, some respondents to the 2014 ACS (those who fill out the survey in January 2014) are reporting income received between January 2013 and December 2013 while other respondents (those who fill out the survey in December 2014) are reporting income received between December 2013 and November 2014.

These differences often result in different national statistics for such key indicators as poverty, median income and income inequality. Despite differences in the “levels” of these indicators, the trends over time tend to be very similar across the two surveys. The following graphs show median household income and poverty rates from the ACS compared with statistics from the CPS ASEC for previous years. The red line adjusts the CPS ASEC for the differences in reference periods. 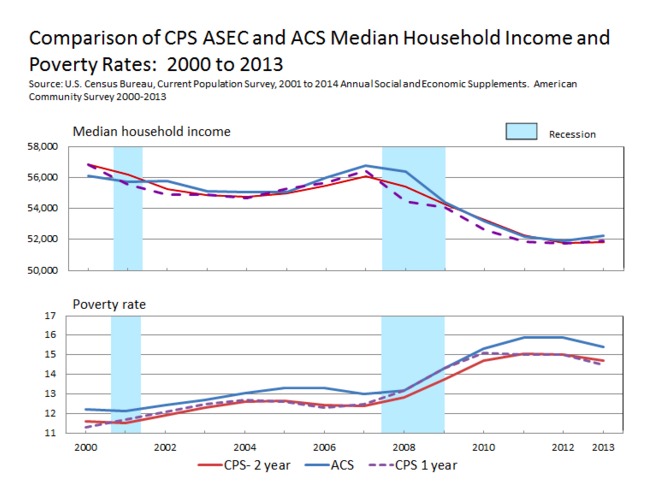 Many people contact us each year asking which estimate to use for a particular purpose. For national statistics, we recommend the CPS ASEC because it provides a consistent historical time series at the national level back to, in some cases, more than half a century. Because of the larger sample size and smaller sampling errors, we recommend using the ACS for subnational geographies.

If you are interested in a longer time series than is available from the American Community Survey, generally we have recommended using two- or three-year averages from the CPS ASEC. However, because of the introduction of the redesigned income questions in a portion of the 2014 CPS ASEC sample and the entire 2015 CPS ASEC sample, we are not publishing these multiyear income and poverty estimates this year. We will resume production of these multiyear estimates next year when we have two years of consistent estimates.