Getting the Fat out of ‘Food Deserts’ Will Take Time

This was previously published by the Chattanooga Times Free Press and written by Steve Johnson. The online version of this article has a Community Commons map embedded that allows readers to visualize the areas discussed.

Drive out 38th Street in Alton Park, or swing northeast through Churchville and Bushtown. The houses are smaller and some are likely to be in need of repair. Local businesses tend to be small mom-and-pop affairs, and good luck finding a grocery store.

There’s even a name for these neighborhoods—“food deserts.”

John Bilderback, a nutrition expert with the Chattanooga-Hamilton County Health Department, has helped prepare a map showing the extent of Chattanooga’s food deserts. He’s plotted the location of grocery stores, and there are obvious blank spots where there is no easy access to fresh produce.

They generally match up with the poorest parts of town, so residents there are not a promising target for grocery stores. And they can’t afford a car to drive to a grocery store. 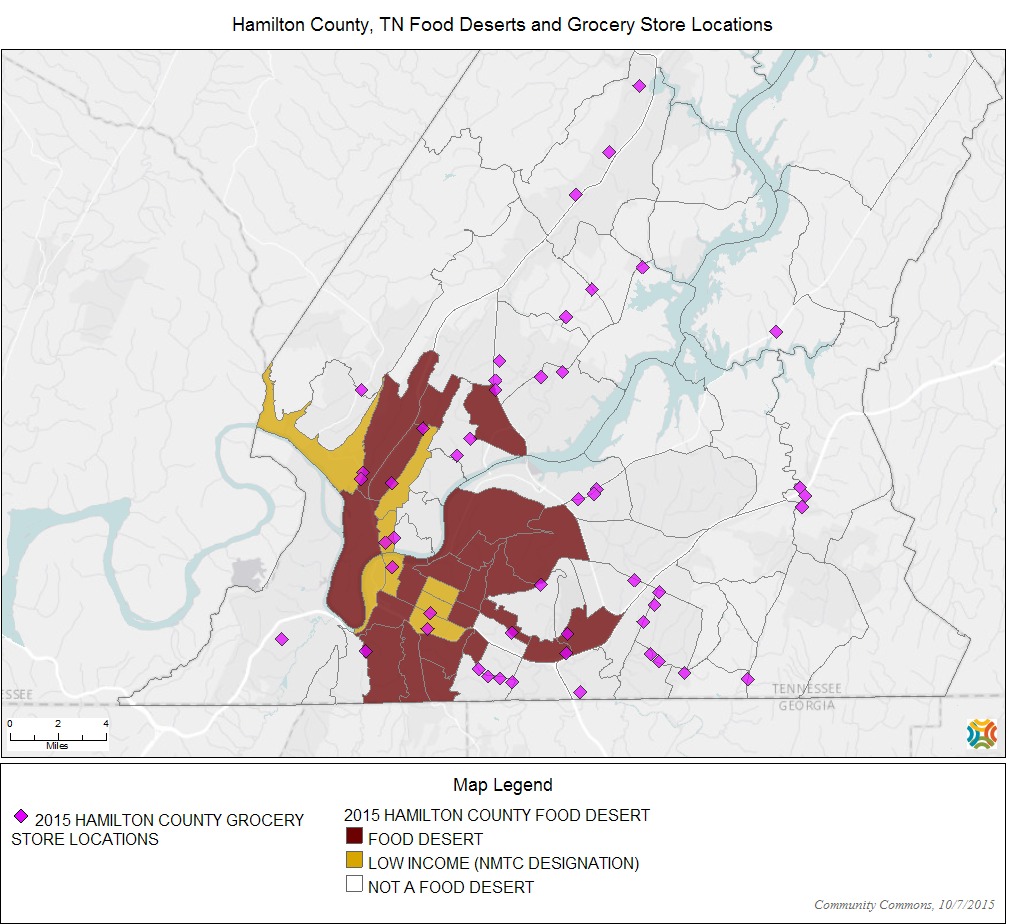 “Communities with low median income—grocery stores tend to not set up operations in neighborhoods like that,” Bilderback said. “So you have a higher incidence of corner stores and restaurants, but no access to healthy foods.”

Food deserts are not the only reason why low-income people tend to be overweight, but they’re an important reason, say health officials who are trying to address the nation’s growing obesity problem.

According to the Campaign to End Obesity, about a third of all cancer deaths are linked to excess body weight, poor nutrition and a lack of physical activity. Obesity is blamed for three-fourths of all high-blood pressure cases. Two-thirds of all adults with Type 2 diabetes are overweight. And, per capita, medical spending for obese people is $2,741 greater than for people of normal weight.

Making healthy choices is a lot harder for those with limited access to transportation.

“While a market may be within walking distance, the safety issues in rough neighborhoods make it unlikely most people will make the effort to trek a distance from home to buy food,” said Pamela Kelle, a local registered dietitian and nutritionist who runs the Your Own Food Coach website. “Other transportation may be available, but have you ever tried to carry several bags of groceries on your lap on a bus?”

Food deserts started getting attention locally in 2012 after Food Lion closed most of its Chattanooga stores, according to the YMCA’s Bill Rush, who manages the organization’s Pioneering Healthy Communities project.

The company had three stores in inner-city Chattanooga, and when they shut down, no one rushed in to take their place.

Several groups in Chattanooga have been trying to solve the problem by bringing fresh produce to areas where it previously has not been available.

For several years, the YMCA has sponsored produce trucks that have made regular rounds in food desert neighborhoods, offering fresh fruits and vegetables. But YMCA officials realized they needed a longer-term solution, so they have begun working with local food store owners to expand their produce offerings. The Y offers advice and financial assistance in purchasing coolers and also helps store owners find local farmers who can supply fruits and vegetables.

Rush says he is negotiating with two other store owners and hopes to have a fourth in place within a few months.

But everyone involved in the battle against obesity concedes that the problem is greater than merely giving everyone access to fresh fruits and vegetables.

It’s no surprise that the South is the most overweight region in the U.S., said Dr. David Schlundt, a Vanderbilt University psychology professor who has studied the problem. He argues that while the way we work has changed, our diets have not.

“When most people were employed in agriculture, you needed lots of calories to get you through all of that hard work,” he said. “But now, you’re going to drive your car and sit on a chair at a 7-Eleven all day, so you don’t need biscuits and gravy, or fried chicken or other fried foods.”

Breaking away from that diet may not be easy.

“The DNA we inherit on how to prepare food is important,” Rush said. “Even if we have access to healthy food, how do we fix it healthier? Does it taste good? Our taste buds are developed when we’re young. Learning and appreciating new tastes can be challenging.”

“If you are a single mother, head of household raising children at poverty level, you’re having to scramble to get a lot done just to survive,” Schlundt said. “You don’t have the time or energy to do a salad with a low-fat dressing.”

“Sometimes eating or overeating is a way of coping with stress or adversity,” he added. “And some people just really like to eat.”

And all around us there is advertising, touting the latest fast-food special.

Countering that message takes a big educational effort. The Chattanooga Area Food Bank has launched a pilot program at Orchard Knob Elementary School to teach second- and fourth-graders the importance of healthy food choices, including giving them a “Sack Pack” of nutritional snacks to take home over the weekend.

But changing bad eating habits is not going to be easy.

“There has to be an incentive to eat healthy foods,” Kelle said. “It may take another entire generation to address the culture issues surrounding foods and teach our young why it is the best insurance policy for a healthy life.”