How Housing Matters for Economic Mobility

The following was originally published at Urban Institute’s Urban Wire and was written by John McGinty and Pamela Blumenthal.

Increasing income inequality and stagnant rates of economic mobility have called into question the promise of equal opportunity and the plausibility of the American Dream. Forty-three percent of individuals born into the lowest 20 percent of the income distribution (the bottom quintile) remain there the rest of their lives, earning $11,490 per year on average. Seventy percent never reach the middle quintile.

As politicians, researchers, and others discuss inequality, equal opportunity, and upward mobility, we need to move the conversation beyond education and employment and consider the central role housing plays.

Why Housing and Neighborhoods Matter

Not only is part of the American Dream to have a home of one’s own, but stable, affordable housing is central to individuals’ and families’ well-being. It plays a critical role in people’s lives—as a major consumption item, a source of safety and stability, the place where one pursues education or employment, and a nationally encouraged means for accumulating wealth.

And where families live can directly influence the educational, employment, and other resources to which they have access. The Great Recession was a reminder that housing not only supports upward mobility, but can cause downward mobility as well.

Effective housing policy can provide low-income people with ladders of opportunity to the middle class and the necessary safety nets to withstand financial shocks. The Urban Institute, with support from the John D. and Catherine T. MacArthur Foundation, hosted a roundtable in early April to discuss these topics in depth and explore how housing policy can promote economic mobility (check out our recent Urban.org policy debate to explore some of the ideas shared at the convening). 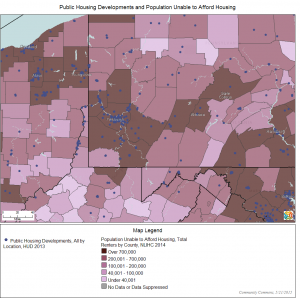 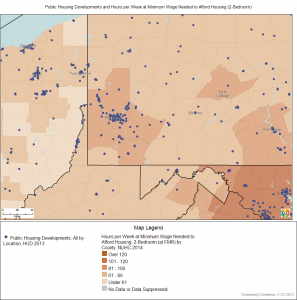 The two maps above examine locations of public housing developments, populations that can not afford housing and hours a week required to work at minimum wage in order to afford housing. Click the maps to expand and zoom to your community or start exploring data in the Map Room.

Local variation in economic mobility extends beyond neighborhoods to cities and commuting zones. The odds of a child raised in the bottom income quintile rising to the top in San Jose, CA are 12.9 percent, but only 4.4 percent for a child in Charlotte, NC. These geographic differences are correlated with income segregation, income inequality, local school quality, social capital, and family structure, many of which tie back to the importance of place and stable, affordable housing.

Policymakers, researchers, and practitioners all need to explore more deeply how federal, state, and local actors can best work together to promote economic mobility. Current calls to restructure the federal mortgage interest deduction to better support low- and moderate-income homeowners and to use the additional federal resources to provide rental assistance present promising pathways.

Small area fair market rents, by which payment levels are established at the zip code rather than metropolitan level, can avoid over-subsidizing units in high-poverty neighborhoods and give families more ability to afford units in low-poverty neighborhoods. We have models from recent disaster recovery efforts and the Strong Cities Strong Communities initiative to inform more effective use of federal resources to improve communities.

While we have much more to learn, efforts to promote economic mobility, particularly among low-income families and families of color, must recognize housing as a critical tool in the policy toolbox.

John McGinty is a research assistant with the Policy Advisory Group in the Executive Office of Research at the Urban Institute, where he works predominantly on issues surrounding housing and economic development in US cities.

Pamela Blumenthal is a senior research associate with the urban policy initiatives group and the Metropolitan Housing and Communities Policy Center at the Urban Institute.