This Food Change Up Could Save Seven Thousand Lives a Year

The following was originally published at Think Progress and written by by Sam P.K. Collins.

Trans fats may soon be a thing of the past with a ruling by the Obama Administration that would require U.S. food manufacturers to dramatically cut back on a substance that nutritionists have long designated as unhealthy and potentially deadly.

The ruling, expected soon, follows a 2013 announcement by the Food and Drug Administration (FDA) that trans fats, also known as partially hydrogenated oils, posed significant health risks, namely an increase in levels of bad cholesterol. Shortly after, the U.S. Department of Agriculture removed trans fats from its “generally recognized as safe” category of foods.

“This is a massive win for public health,” Sam Kass, the former senior adviser for nutrition at the White House and executive director of Let’s Move!, told Politico. “There are few targeted actions you can take in this space that have that kind of direct impact.”

Trans fats are made when a hydrogen and liquid oil mixture creates a solid form of fat. Food manufacturers turned to trans fats in the 1950s as part of an effort to cut use of saturated fats in animal products, commonly found in lard and butter. While trans fats have enjoyed some protection from the FDA approval process since entering the market, a slew of research in the last 30 years has tied the consumption of the substance to heart disease and other cardiovascular disorders. A Harvard School of Public Health study also said that the substance causes nearly 100,000 premature deaths annually. Recent studies have also shown signs of memory loss in those who eat large amounts of trans fats.

Visual data helps make the case to policy makers that change is necessary. The following maps illustrate the total of Adults diagnosed with Heart Disease, by County and the total of Premature Deaths, by County. Click on the interactive map to see what the data looks like for your own community or visit our Map Room to create your own maps. 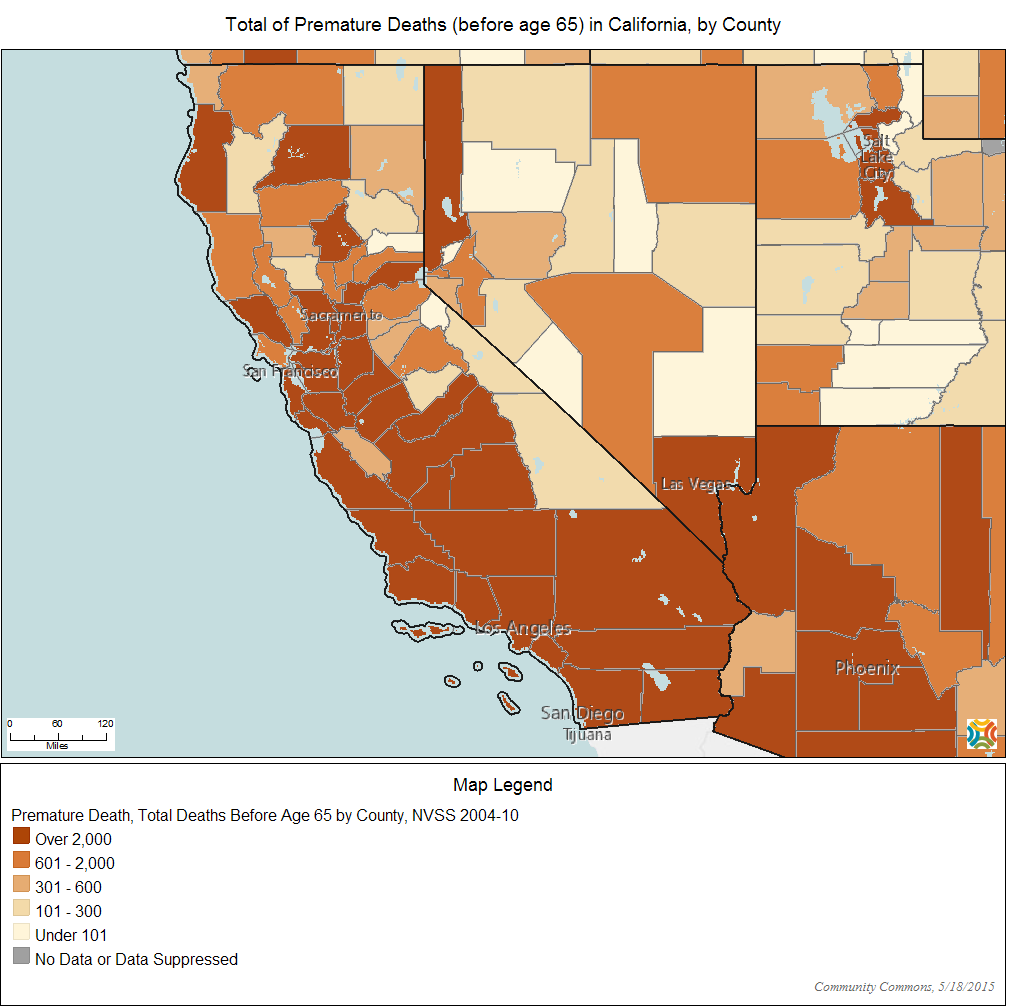 Today, a wide range of margarine, packaged food snacks, baked goods, and fried foods contain trans fats. Even with a three gram per day reduction of partially hydrogenated oil in a host of popular products — including Oreos and Cheetos — trans fat has maintained a presence in Pop Secret microwave popcorn, Pillsbury Grands! Cinnamon Rolls and Sara Lee cheesecake, and other bakery items. Trans fats are used to increase the shelf life of foods and the its ability to stabilize flavors, colors, and salts in snack and dessert items.

For years, research pointing to the damaging effects of trans fats didn’t convince industry leaders, many of whom railed against proposals to ban the substance for decades. Even with the ban, they still might have hope in the food additive review process — led by the Grocery Manufacturers Association — which will determine what level of trans fat, if any, is safe for consumers. Food producers, however, have grown anxious about the magnitude of such regulatory changes. Trans fats have become ubiquitous in food production, causing food producers and public health officials to ponder the ripple effects of the Obama Administration ban.

Food corporations Nestle and General Mills already have to grapple with such a reality. Both companies are embroiled in class action lawsuits in California federal court stemming from their alleged use of trans fats in baking mixes and coffee creamers without any attempt to use healthier alternatives. Representatives of the Western Firm, which filed the suit, accused the defendants of prioritizing profit over consumers’ well-being. “The case against the use of trans fat in foods is rock solid and has been for at least 10 years. There’s no excuse for companies to use it when they know it’s dangerous and there are safe substitutes,” the Western Firm recently told Law360.com.

Alternatives experts suggest include vegetable fats like coconut and palm oil, saturated fats in smaller quantities, and a blend of monounsaturated or polyunsaturated vegetable oils that replicate the shelf life and texture of trans fats. An explosion in the use of these substitutes could prove perilous for the environment, particularly with palm oil, which requires the clearing of rain forests to make way for palm plantations.

Some U.S. government officials say that’s part of the reason why change has been so lethargic, even as five European countries have banned trans fats and others have implemented self-regulatory guidelines. Even with the passage of the ban, there’s some acknowledgement that consumers will not see the end of the trans fats anytime soon, as noted in the passage of food labeling laws that allows for food products with less than 0.5 grams of trans fat to be designated as free of the substance.

“The FDA decided to take incremental steps to reduce partially-hydrogenated oils from the food supply and achieve its public health goal in order to allow the time needed to develop alternative fats and oils that could replace partially hydrogenated oils,” FDA Spokeswoman Shelly Burgess told Civil Eats in 2013. “Without allowing the time for technological innovation and reformulation of products, there likely would have been significant disruption in the marketplace, from retail to restaurants.”

is a health reporter for ThinkProgress.