How to Create Commons-Friendly Neighborhoods

This feature was previously published at OnTheCommons.org and was written by Jay Walljasper.

Battle lines are shaping up across American cities and suburbs today over urban density. On one side stand neighbors and developers who explain that convenient transit, walkable communities, environmental protection and continuing economic growth depend on welcoming more people-per-acre to our communities. On the other side stand developers and neighbors who plead that everything we cherish about our communities is about to vanish in the wake of hulking mega-projects.

But there’s a middle ground in this conflict—which turns out to be quite a nice place to live and a great example of commons-friendly communities. These are low- to mid-rise neighborhoods with high levels of density but a charming and convivial feel. Indeed, the places many of us seek out on vacation, spending our scarce free time and travel budgets, are thronged with people—cosmopolitan cities, historic small towns, theme parks and state fairs. It’s the proliferation of cars we fear in big new developments, not the density of fellow human beings. 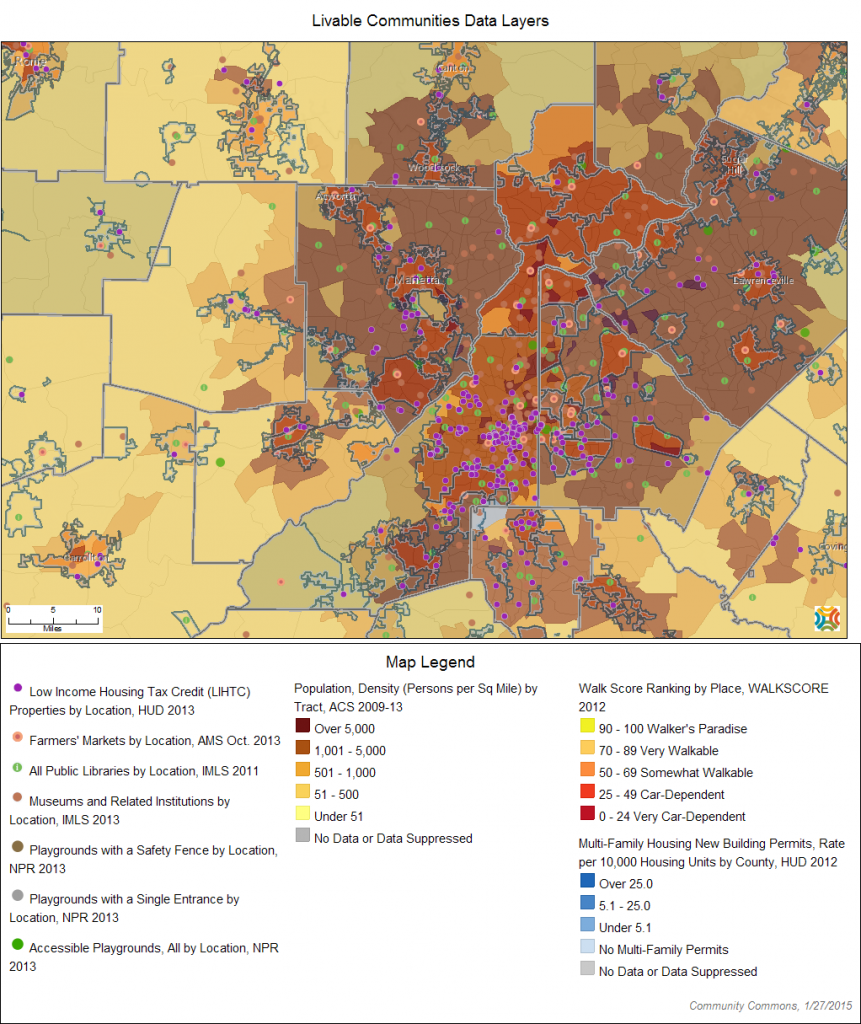 Click on the interactive map to zoom to any community in the US, turn data layers on and off, add other data layers, or download and share with others.

Density has become a dirty word because we associate it with ugly gigantically-scaled projects that seem to spawn social blight. But Edward McMahon, Senior Fellow at Urban Land Institute, believes “we can achieve tremendous density without high rises” by utilizing traditional designs such as two-to-four story walk ups that were once “common in cities and towns throughout America.” Look at suburban Berwyn, Illinois, full of tidy brick bungalows but with a population density greater than neighboring Chicago.

Unfortunately the best methods of achieving this kind of low-rise, neighborhood-scale density are illegal under many current zoning codes—attic, basement or carriage house apartments; granny flats or garden cottages at the back of a lot; unrelated adults sharing a house; small homes on small lots; houses without attached garages; shops around the corner.

Making such practices legal again would not only be good for urban vitality, historical character and the environment but also promote social justice, says Alan Durning of the Sightline Institute, author of Unlocking Home: Three Keys to Affordable Housing. “We have effectively banned what used to be the bottom end of the housing market,” he writes.

A visit to Vancouver may convince you there’s even a place for high-rises in livable communities. The West End neighborhood, near Stanley Park, sports a population density approaching Manhattan but still retains a neighborly feel thanks to strong pedestrian amenities and a policy of locating garage doors and drop-off points at the back, rather than the front of high rises. Close attention is also paid to tapering tall structures so they don’t block sunlight for neighbors, which is a particularly critical issue in this cloudy town.

Suburbs can enjoy even richer rewards than the central cities for embracing density. Towns in suburban Washington D.C, are thriving by creating full-scale walkable downtowns around transit stops, which Christopher Leinberger, an expert on real estate at George Washington University, calls “a model for the country,” based on what the Millennial generation are looking for in a home.

And in at least one case, we can learn a lot from a thriving shopping center. Country Club Plaza in Kansas City, built in 1922, was the country’s first commercial development built to accommodate the automobile. Yet it remains a bustling, pedestrian-oriented place featuring Spanish-themed architecture with housing mixed in and parking discreetly concealed in ramps beneath and behind the stores.

Jay Walljasper writes, speaks, edits and consults about creating stronger, more vital communities. He is author of The Great Neighborhood Bookand All That We Share: A Field Guide to the Commons. His website: JayWalljasper.com. This feature adapted from “27 Bright Ideas We Should Steal From the Rest of the World”, a report on best practices by Jay Walljasper published by the McKnight Foundation.