The Way Forward Against Hunger

This is the last in a four-part series about the 2014 Hunger Report produced by Bread for the World. Each installment has focused on one of the four steps outlined to end hunger by 2030.

Bread for the World has a goal of ending hunger in America by 2030. In our initial feature about their 2014 Hunger Report, we discussed the first step of the plan, which is achieving full-employment for America’s workers. Our second feature focused on getting a fair deal for those workers. Then we looked at strengthening America’s safety net in our third feature. Now we pull it all together by talking about building strong partnerships to tackle hunger.

It’s hard for many people to grasp that hunger is a real problem in our land of plenty. Yet on a daily basis, there are families that have to make choices between paying for basic needs and forgoing a meal.

“There is no good reason for hunger in the United States—and yet hunger persists, ruining
lives and crippling the nation. It is a political problem: the lack of political will to take hunger
seriously, to make it a national priority, and to develop a comprehensive plan to end it once
and for all.”–The 2014 Hunger Report 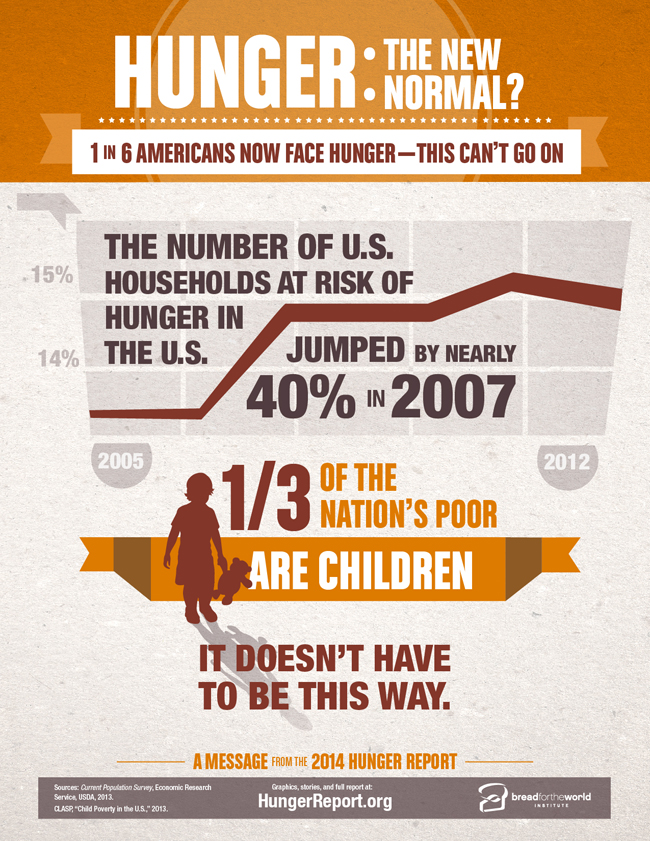 The Only Way it Will Get Done

From small towns to metropolitan areas, great work is being done to alleviate hunger; but until there is leadership in connecting these initiatives, ending hunger will continue to elude us.

The Hunger Report includes an essay (p.124) by Dave Miner of the Indy Hunger Network that illustrates why a public/private partner system is good for ending hunger. He says we need government involvement because the problem is large and requires efficiency, uniformity, fairness, and rapid scalability in times of crisis. When these government functions take place, private programs can focus on filling the gaps, such as rescuing food that would otherwise go to waste, engaging the community, encouraging people accept help, and assisting families with their broader poverty issues.

It’s not only about providing food. Sustainable, long-term solutions also come in the form of raising awareness and organizing action. Examples of successful efforts include:

“Looking at the problem systemically, I believe there is a strong case to be made that a public/private partnership is essential if we are going to end hunger in the United States once and for all.” –Dave Miner, Indy Hunger Network.