A New Vision to Fix The Tragedy No One Thinks About

More than 4500 pedestrians are killed by motor vehicles every year on the streets of America–more than those who died in the horror of 9/11.

A recent report from the National Complete Streets Coalition studying ten years of data found that 16 times more people were killed crossing the street than in natural disasters over that same period. Another 68,000 walkers on average are injured every year. The victims are disproportionately children, seniors and people of color, according to the report.

This pedestrian safety crisis is even more dire internationally. More than 270,000 people are killed while walking every year–22 percent of a total 1.24 million traffic fatalities, according to the World Health Organization. 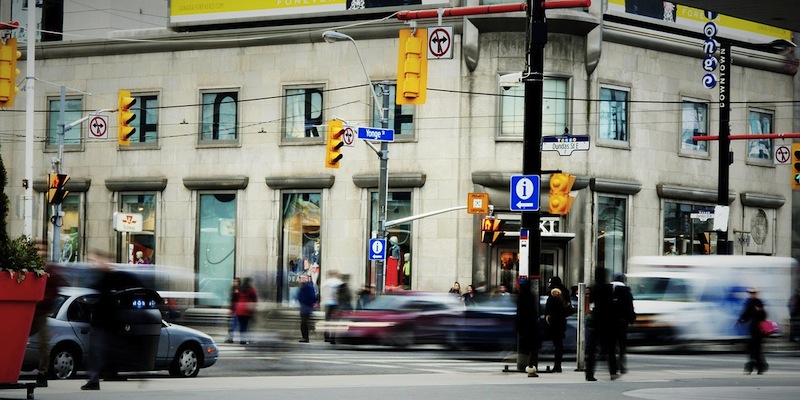 “It’s like an airplane falling out of the sky every other day. If that actually happened, the whole system would be ground to a halt until the problem was fixed,” notes Scott Bricker, Executive Director of America Walks, a coalition of walking advocacy groups. “We need to address this terrible problem with the same urgency.”

Unfortunately, pedestrian deaths (and all traffic fatalities) are viewed as an inevitable side effect of modern life.  “People accept this as normal, just as 100 years ago most people accepted that women could not vote,” observes Gil Penalosa, Executive Director of 8-80 Cities, an international organization working to make streets safe for people of all ages. 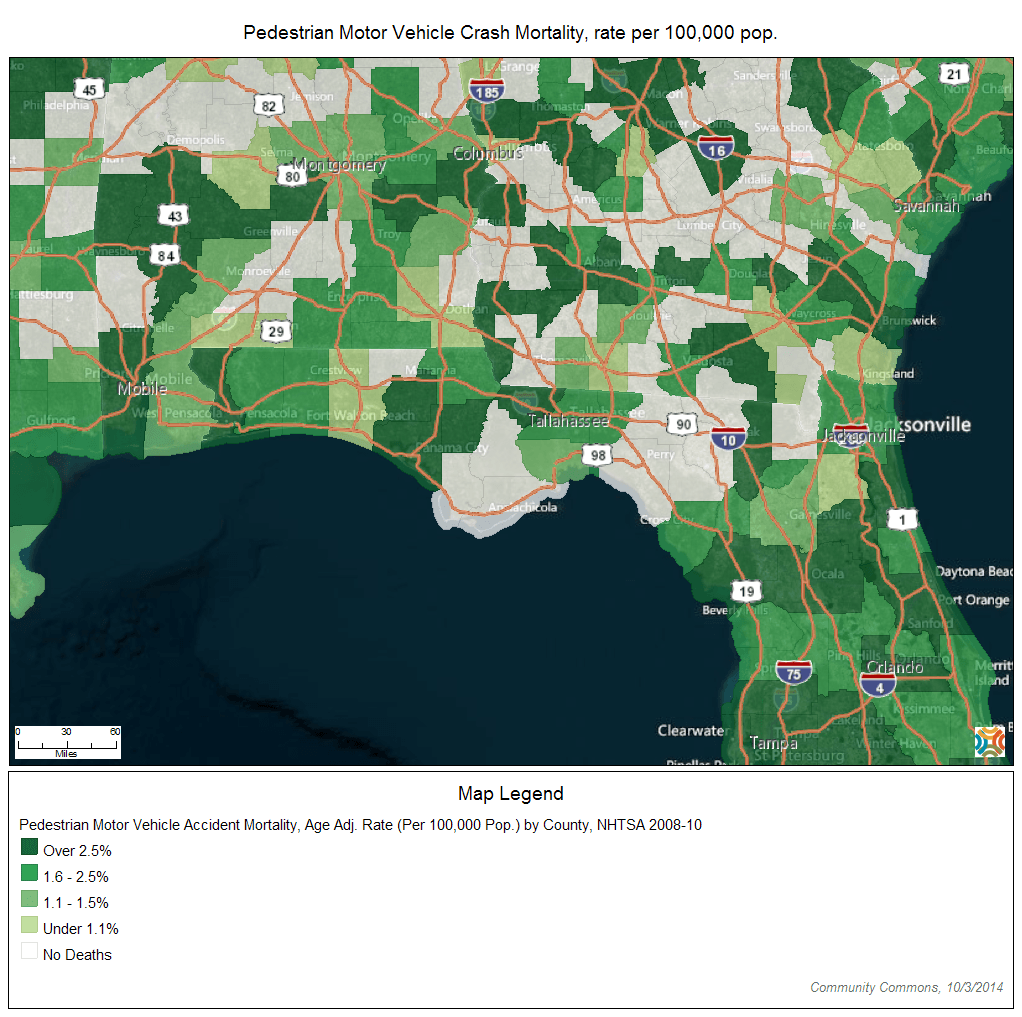 To see this for your community, click on the map then zoom to your area.

Yet recent history offers genuine hope for making our streets safer. A generation ago domestic abuse and drunk driving were seen as sad, unalterable facts of human nature.  But vigorous public campaigns to prevent these tragedies have shown remarkable results, offering clear evidence that destructive human behavior can be curbed when we put our minds to it.

Campaigns to reduce pedestrian, bicyclist and motorist deaths to zero are now taking shape around the country from Philadelphia to Chicago to Oregon.

This new safety strategy, called Vision Zero, is modeled on successful efforts in Sweden, where overall traffic deaths have been cut in half since 2000, making Swedish streets the safest in the world according to a front page story in the New York Times. Pedestrian deaths in the country have also plunged 50 percent since 2009.

Sweden takes a far different approach than conventional transportation planning, where “road users are held responsible for their own safety” according to the website Vision Zero Initiative. Swedish policy by contrast believes that to save lives, roads must anticipate driver, bicyclist and pedestrian errors, “based on the simple fact that we are human and we make mistakes.”  This is similar to the Netherlands’ policy of Forgiving Roads, which has reduced traffic fatalities by 75 percent since the 1970s, compared to less than a 20 percent reduction in the US over the same period.

Three US states that adopted aggressive measures to cut traffic deaths similar to Vision Zero–Utah, Minnesota and Washington–all have seen traffic fatalities decline by 40 percent or more, 25 percent better than the national average.

In New York City, Mayor Bill de Blasio won office last year on the promise of reducing traffic deaths in a city where someone is killed or seriously injured by a motor vehicle every two hours on average. 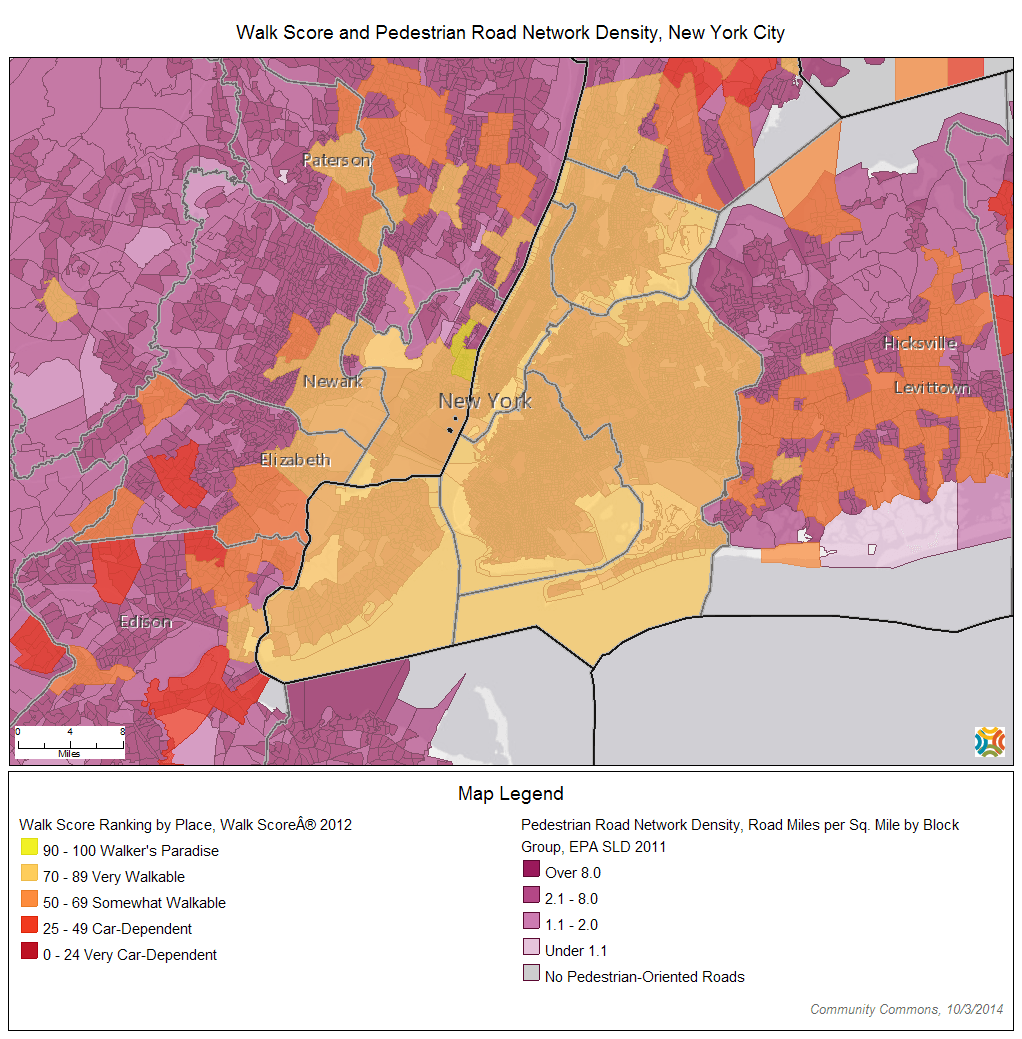 To see this for your community, click on the map then zoom to your area.

“The fundamental message of Vision Zero is that death and injury on city streets is not acceptable, and that we will no longer regard serious crashes as inevitable,” de Blasio wrote in a letter to New Yorkers. “They happen to people who drive and to those who bike, but overwhelmingly, the deadly toll is highest for pedestrians–especially our children and seniors.” Traffic accidents are the largest preventable cause of death for children under 14 in New York, and the second highest source of fatal injuries for people over 65.

In May, New York’s City Council passed 11 bills and 6 resolutions to implement de Blasio’s Vision Zero Action Plan across many city departments, including: 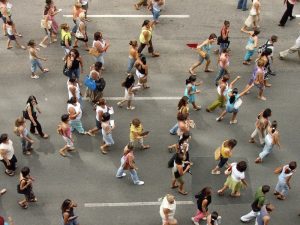 One of New York’s biggest problems, according to walking and bike advocates, is that the police department focuses far more resources on street crime than on street safety, even though 356 people were killed in traffic accidents last year (half of them pedestrians and bicyclists), compared to 333 murders. Advocates cheered when de Blasio chose William Bratton, who has spoken out about the need to curb traffic injuries and deaths, as his police chief.

“It’s really impressive what Mayor de Blasio has done,” explains Noah Budnick, deputy director of Transportation Alternatives. “He has put his money where his mouth is” by finding funding for street safety projects and increased police enforcement in an era of tight budgets.

Streets of San Francisco and Beyond

Katherine Kraft warns, “We won’t increase walkability–which is good for people’s and communities’ health–until we make the streets more safe and comfortable for walking.” Vision Zero, she says, is the path toward a better life for all of us.

Automated Vehicles: Back to the Future
November 30, 2017