This is the first in a four-part series about the 2014 Hunger Report produced by Bread for the World. Each installment will focus one one of the four steps outlined to end hunger by 2030.

You read that right. Bread for the World has a goal of ending hunger in America by 2030 and they are very optimistic about reaching it. Bread describes themselves as a collective Christian voice urging the nation’s leaders to end hunger at home and abroad. This is the fifth year they have produced the annual report that provides policy analysis on hunger and identifies strategies to end it.

Bread’s optimism toward reaching this goal is not misplaced. In 2000, much of the developing world set Millenium Development Goals for poverty reduction by 2015 and are on track to reach those goals. Bread is now urging the President and Congress to lead this country in setting its own goals to end hunger by 2030 and outlines a four-part plan to make that happen.

Their underlying message to us, as Americans, is that we all have a part to play in making our collective voices heard and to keep policy makers accountable to solving this problem.

In 2010, Sary Dobhran found herself unemployed and struggling to raise a young son whose father had died while she was still pregnant. Although she had a college degree, work within her field was hard to come by. Federal funding tied to putting people back to work allowed her to receive additional training and she now earns a living wage performing energy audits in Portland, Oregon.

“There are a lot of people out there like me.” –Sary Dobhran

The Hunger Report stresses that ending hunger is simply not possible unless there are more full time jobs available to workers and that those jobs pay better wages. It calls upon the government to: make job creation a priority through supportive monetary policies; to spur economic stimulus and investments; and to encourage entrepreneurship in low-income areas.

“It may sound simple, but it’s still true: the best defense against poverty and hunger is a steady, well-paying job. It is true not only at the household level, but for the nation as a whole. When jobs are plentiful, poverty and hunger rates plunge.”–the 2014 Hunger Report 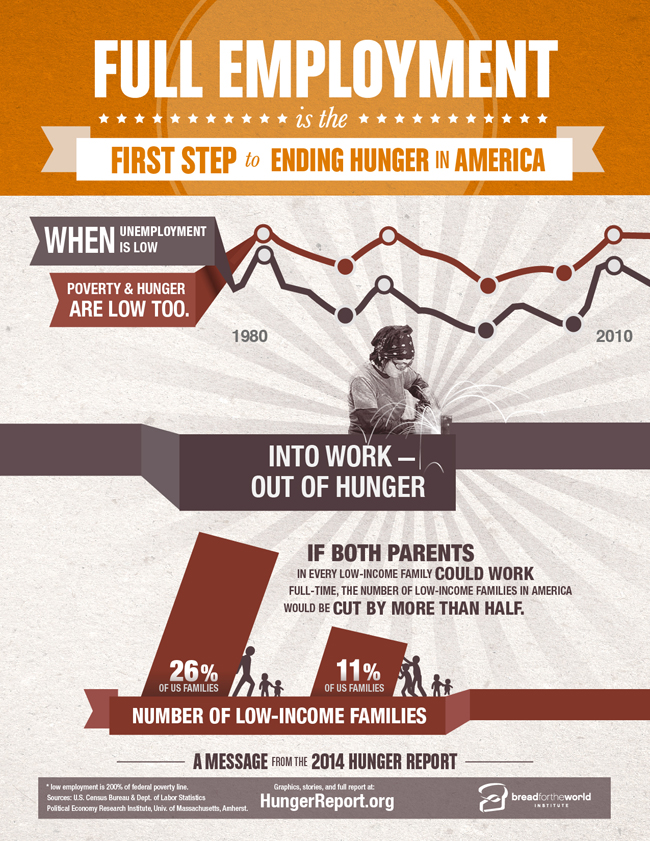 We All Have a Part to Play

While the large-picture items require the work of national legislation, the report puts forth that a true commitment to ending hunger also requires leadership at the state and local levels. Building the political will to address the problem is something we must all embrace.

How? By engaging policy makers, organizations, and stakeholders in ownership of the issue. Hunger is not something that exists a continent away, it’s down the street, it’s in the local schools, and it’s in our faith communities.