How to Make the Streets Safe for All Bicyclists

This is the third in a three part series in which Jay Walljasper discusses how the bike lanes of the future can be seen on our streets right now and could change the face of transportation.

In part one of this series, I stated a case for building more protected bike lanes in the US and in part two I explored why The White Stripe wasn’t the answer. Now I discuss why the “Same Road. Same Rules. Same Rights” mentality is getting another look by transportation advocates. 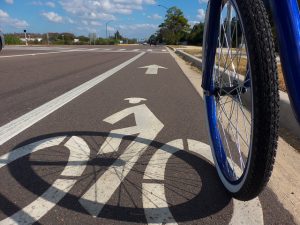 Although special facilities for bicyclists date back to 1874, when New York City’s Eastern Parkway was built, the first bike lanes as we know them appeared on the streets of Davis, California in 1967.  A college town near Sacramento, Davis still leads the nation for the highest percentage of local trips made by bike at 22 percent.

This city of 65,000 currently boasts 50 miles of on-street bike lanes and 50 miles of off-road trails, with another 20 miles of bikeways on the University of California-Davis campus. The community recently opened its first protected lane as part of an effort to boost bike trips to 30 percent in time for the 50th anniversary of America’s original bike lane. 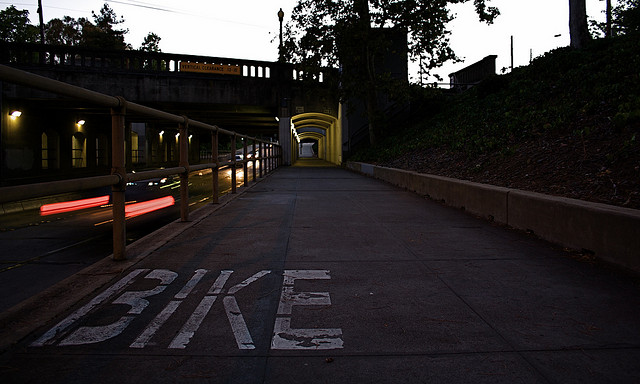 These early bike lanes ignited controversy–not just from motorists who thought streets were strictly for cars but also from a few bicyclists who viewed bike-only lanes as a form of transportation segregation. The fiercest critic was John Forester, an industrial engineer in Palo Alto who resented a local law banning bicyclists from traffic lanes on streets with bike lanes, which he felt were poorly designed and too slow. In 1975–a year when more than 1000 bicyclists were killed on America’s roads–he published Effective Cycling, which became the bible to a small but vocal movement calling themselves “vehicular cyclists.”

Embracing the motto of “Same Roads. Same Rules. Same Rights,” they believed bicyclists were better off being treated the same as motor vehicles on the street. Instead of bike lanes, they emphasized special training for bicyclists as the best way to make cycling safer. 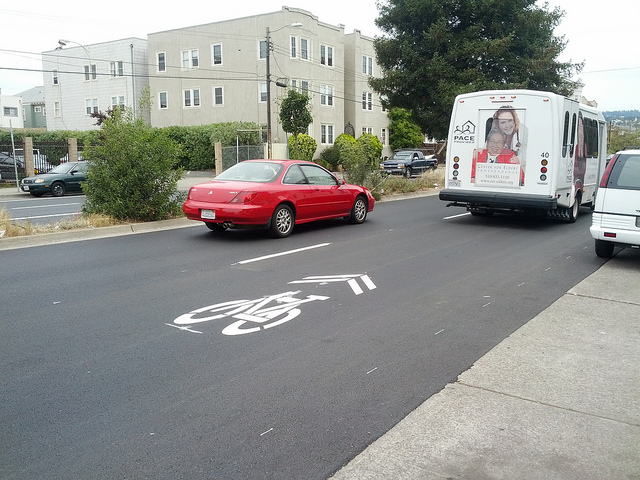 A sharrow is an indicator to motorists and bicyclist that they are supposed to share the road. California. Photo credit: Eric Fischer under a Creative Commons license.

That approach didn’t make sense to most people–then or now. “A car weighs five tons.  You can’t be equal to that no matter how well you know how to ride,” responds Gil Penalosa, president of 8-80 Cities, which works to make streets more walkable and bikable for everyone.

Yet vehicular cyclists (VC) proved very effective in spreading their message against separated bike lanes by claiming to speak for bicyclists as a whole. “A legion of persistent, uncompromising critics…held sway throughout much of the late 1970s and 1980s because city officials found in VC advocates the cheapest and easiest course to pursue”–that is, doing nothing for bicycles, writes Zack Furness in his book One Less Car: Bicycling and the Politics of Automobility.

Their influence can still be felt in the national guidelines traffic engineers follow most closely, the AASHTO Guide (produced by the American Society of Highway and Transportation Officials), which ignored protected bike lanes in the updated 2012 edition of its Bicycle Guide. AASHTO’s snubbing of protected bike lanes has slowed their growth because state officials frequently veto plans to create them on urban streets that receive state funding, says Craig Williams, former Illinois Bicycle-Pedestrian Coordinator now with Alta Planning.

The following maps show Road Network Density in four different cities. Road Network Density looks at how manageable a road is for pedestrians by looking at rate of speed and controlled intersections. A higher score (darker color) indicated a safer road for those using alternative transportation. See this map for your area.

Fortunately, the National Association of City Transportation Officials (NACTO) stepped in to create its own Urban Bikeway Design Guide in 2011, which outlines best practices for protected bike lanes and other innovative bicycle facilities.

“Vehicular cyclists argue that anyone can ride in traffic, if only they are trained appropriately. That ignores the reality that most people aren’t comfortable riding a bike in the midst of cars,” notes PeopleForBikes’ Martha Roskowski. “Biking should not be a badge of courage. It’s should be a way for anyone to get groceries or go to work.”

“The vehicular cycling philosophy set bicycling backwards,” said Andy Clarke, president of the League of American Bicyclists, which once was a stronghold of vehicular cyclists. Back in the 1970s, he notes, vehicular bicyclists had a point about the poor quality of bike facilities and the threat of bikes being banished from the streets. But today the League works with other bike advocates in supporting more bike lanes, protected lanes and other innovations that allow more people to enjoy biking.

Automated Vehicles: Back to the Future
November 30, 2017
© Copyright Institute for People, Place, and Possibility (IP3)