How to Inspire Millions More Americans to Ride Bicycles

This is the first in a three part series in which Jay Walljasper discusses how the bike lanes of the future can be seen on our streets right now and could change the face of transportation.

You can see big changes happening across America as communities from Fairbanks to St. Petersburg transform their streets into appealing places for people, not just cars and trucks.

“Over the past five years we’re seeing an infrastructure revolution, a rethinking of our streets to accommodate more users–busways, public plazas, space for pedestrians and, of course, bike lanes,” says David Vega-Barachowitz of the National Association of City Transportation Officials. “More protected bike lanes is one of the most important parts of this.” 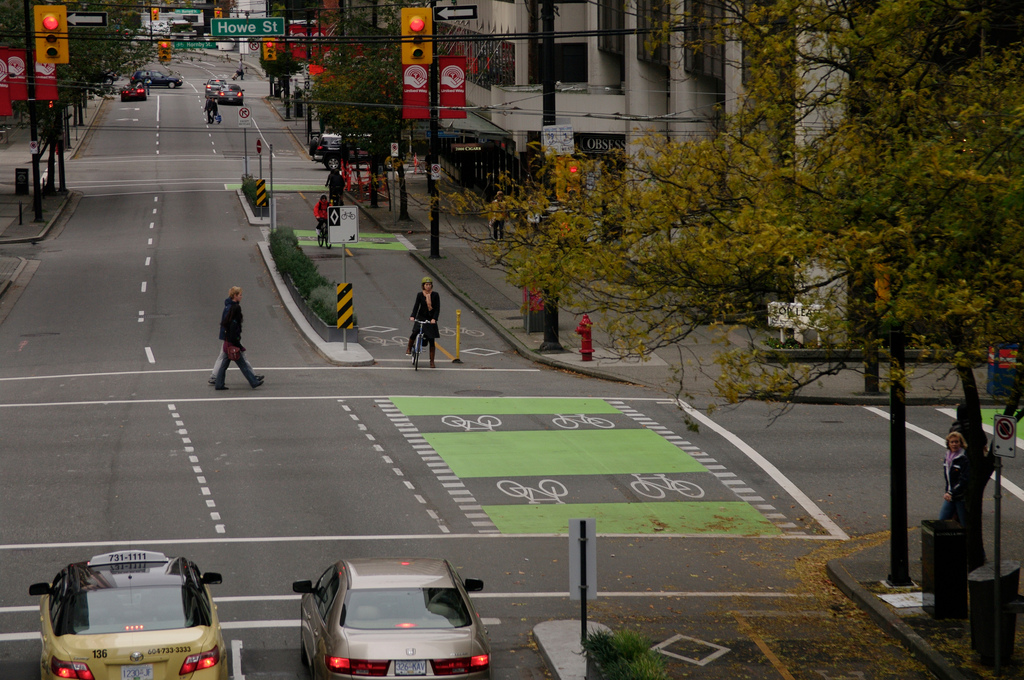 Protected bike lanes separate people on bikes from rushing traffic with concrete curbs, plastic bollards or other means–and sometimes offer additional safety measures such as special bike traffic lights and painted crossings at intersections. Protected bike lanes help riders feel less exposed to danger, and are also appreciated by drivers and pedestrians, who know where to expect bicycles. Streets work better when everyone has a clearly defined space.

The Continuing Evolution of Bicycling

Protected bike lanes are standard practice in the Netherlands, where 27 percent of all trips throughout the country are made on bicycles. That’s because more women, kids and seniors along with out-of-shape, inexperienced riders feel comfortable biking on the streets. Dutch bike ridership has doubled since the 1980s, when protected bike lanes began to be built in large numbers.

American communities, by contrast, paint bike lanes on the street, often squeezed between parked cars and busy traffic. With just a white line dividing bicyclists from vehicles, it’s no surprise that only a small percentage of Americans currently bike for transportation.

“Conventional bike lanes have not worked well to get new people on bikes– they serve mostly those already biking,” says Martha Roskowski, vice president of local innovation for PeopleForBikes. “It’s time to evolve the bike lane.” 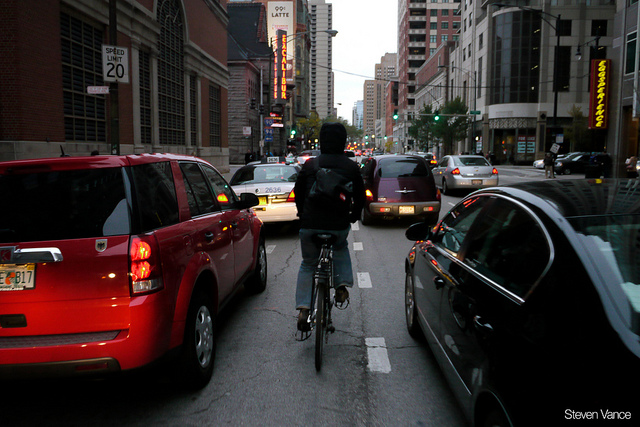 Nearly two-thirds of Americans would bicycle more if they felt safer on the streets, reports the Federal Highway Administration. Protected bike lanes, along with public bike share systems, are two of the best ways to get more people out on bikes, according to a growing chorus of transportation leaders.

Protected lanes have recently popped up in more than 30 communities across the U.S. from Munhall, Pennsylvania, to Temple City, California, with many additional projects set to open later this year.

New York’s first protected lanes provoked fierce opposition from a few people, but Paul White of the local bike and pedestrian advocacy group Transportation Alternative says the public debate has now shifted to “Where’s mine? How come that neighborhood has safe streets and we don’t –don’t my kids matter as much as theirs?” 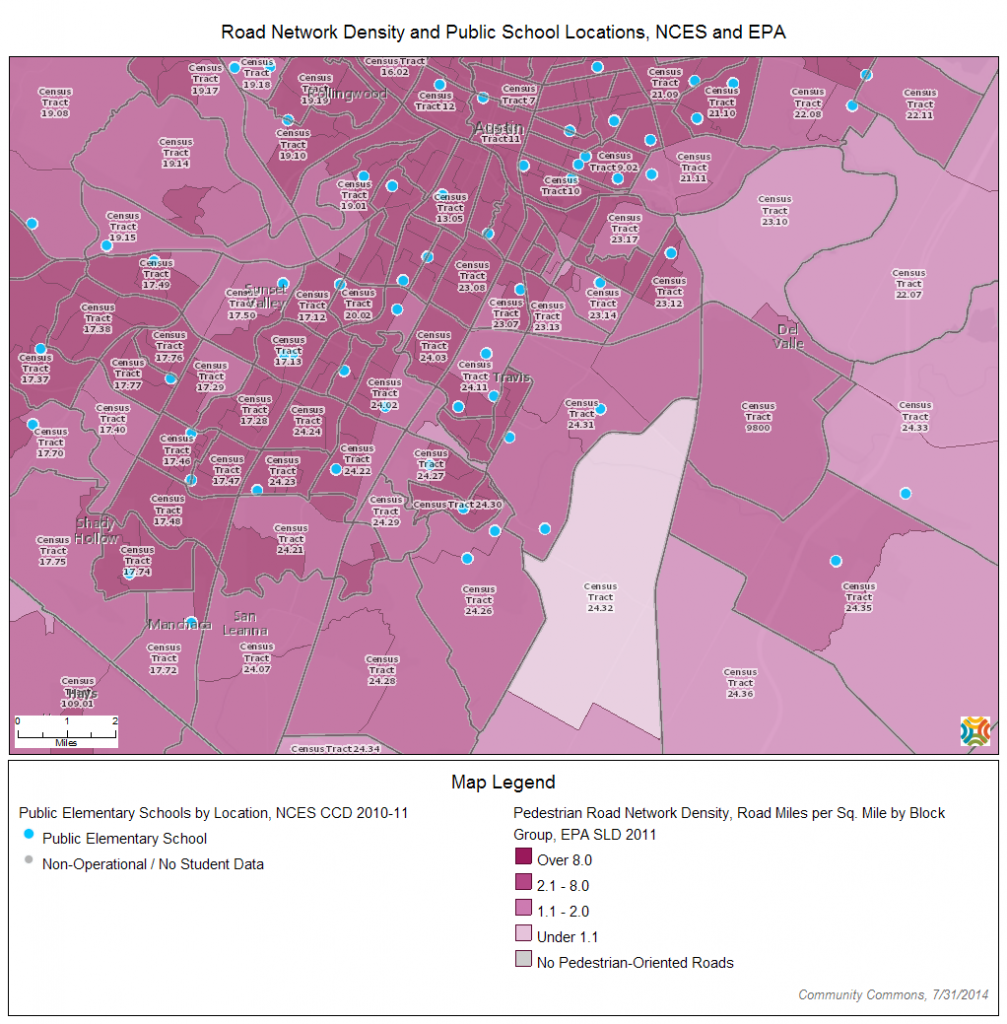 Pedestrian Road Network Density looks at how manageable a road is for pedestrians by taking into account road speed and controlled crossings. These features are also desirable for bicyclists. When this data is paired with locations of public schools, a community can see where protected bike lanes would improve the ability of children to bicycle to school on their own. See this map for your own area.

Chicago aims to catch up with New York, and has recently opened 23 miles of protected lanes. San Francisco has built 12 miles so far. “Wherever we can, we try to put in protected bike lanes,” stresses Seleta Reynolds, former Section Leader of the San Francisco Municipal Transportation Agency who oversaw installation of many of San Francisco’s protected bike lanes. Reynolds was recently tapped by Los Angeles Mayor Eric Garcetti to head the City’s Department of Transportation.

Other leaders in the field are Austin, Texas, with 9 miles and Washington, DC with 7 miles, including a highly visible route down Pennsylvania Avenue leading to the U.S. Capitol, which has tripled the number of people riding bikes on the street. More protected bike lanes are planned or under construction in all of these cities.

This year more than 100 cities submitted proposals to PeopleForBikes to be part of the Green Lane Project, a competitive fellowship which offers cities financial, strategic and technical assistance valued at $250,000 per city to build or expand protected bike networks during a two-year period. Atlanta, Boston, Denver, Indianapolis, Pittsburgh and Seattle were selected in March to be the second round of Green Lane Project cities.

Just released research on protected bike lanes in five of the first-round Green Lane Project cities (Chicago, San Francisco, Austin, Washington D.C. and Portland) shows why so many communities are eager to follow their lead.  The federal Department of Transportation-funded study found an increase of ridership from 21 to 142 percent on streets featuring protected lanes in the first year, with an average increase of 75 percent. Meanwhile evaluation of protected bike lanes by the city of New York found that traffic injuries declined for all road users (not just bicyclists) by an average of forty percent. 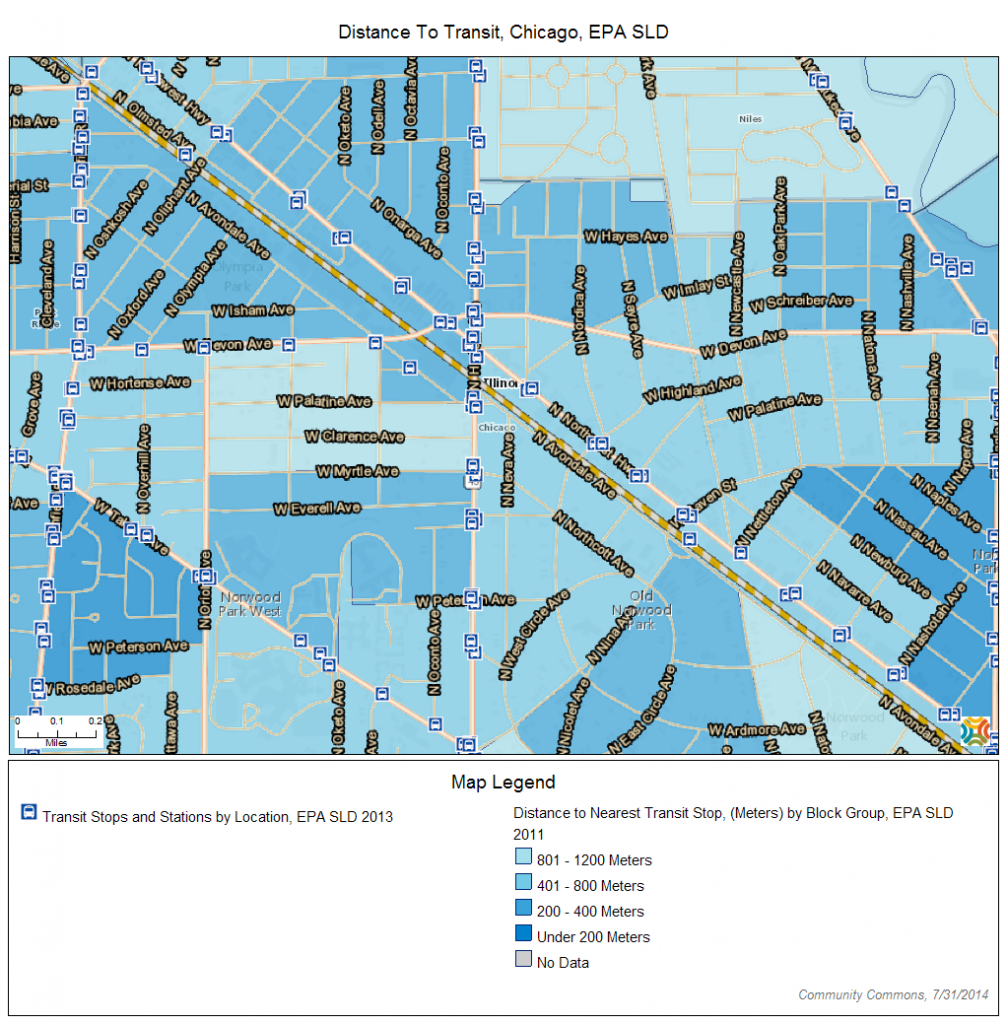 This distance to transit map shows how far a pedestrian or bicyclist has to travel to reach a transit stop in an area of Chicago. Building protected bike lanes in areas with farther distances to travel to transit stops may increase the number of people willing to take transit to their destinations. See this map for your own area.

Next time: Walljasper discusses Beyond the White Stripe “One problem with conventional bike lanes is that they raise expectations beyond what they can deliver. ”

Automated Vehicles: Back to the Future
November 30, 2017
© Copyright Institute for People, Place, and Possibility (IP3)