Join Community Commons in congratulating Active Living By Design on their ten years of pioneering work in active living and healthy eating. Over the next several weeks, the Commons will highlight ALBD’s commemorative milestones in a series of Features.

In what ALBD Director Sarah Strunk calls the “high touch/low dollar” approach to grant making, twenty-five diverse community partnerships were chosen (out of 966 who applied) in 2003 to see what they could do with a steady stream of modest funding matched with high-level technical assistance over the course of five years.

Six of those communities are featured in the ALBD commemorative milestone: Stories from Community Partners. Highlights include: 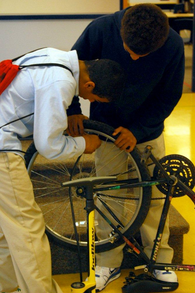 Buffalo NY is the third poorest city in America, with an overweight rate of three times the national average. They used their original ALBD funding to launch a Healthy Communities Initiative focused on improving and increasing active transportation options and transportation infrastructure. The non-profit Green Options Buffalo, was formed with a mission to create healthy, environmentally sustainable and community-friendly transportation. Since then, Buffalo has received Healthy Eating By Design (HEBD) and Healthy Kids, Healthy Communities (HKHC) grants to continue and expand their successful work.

Louisville, KY is home to fast food conglomerate Yum! Brands and a 64.9% adult 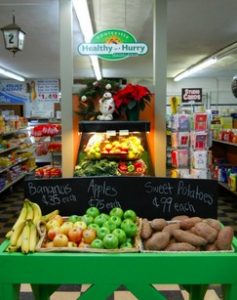 overweight or obesity rate. When a new public housing development, called Liberty Green, was built, the Louisville ALBD partnership ensured that parks and a walkable streetscape were included. The partnership has also increased safety for biking and walking and helped establish connections from twelve target neighborhoods to the Louisville Loop, a 25-mile shared-use path that will eventually become a 100-mile loop around the city. They are also recipients of HKHC and HEBD grants with which they’ve partnered with seven corner store owners and the YMCA of Greater Louisville to install Healthy in a Hurry sections of fresh produce in areas without or with few full-service grocery stores.

Columbia, MO boasts a highly educated community with two colleges and the University of Missouri, but had few students and residents that biked or walked around town. Columbia’s ALBD grant allowed them to raise community awareness about the benefits of active transportation by ramping up the Mayor’s Challenge: Bike, Walk and Wheel Week; expanding the Walking School Bus; and developing a bicycle education program. Their work toward behavior change through education and encouragement helped them win a $25 million dollar federal Nonmotorized Transportation Pilot Program grant to plan, build and promote use of a network of active transportation paths throughout the city.

Read the full descriptions of these communities and several more at the ALBD: Stories from Community Partners page.