Guest Blog by: Margo Wootan, D.Sc. and Lindsay Vickroy of the Center for Science in the Public Interest

Companies know that marketing is effective or they wouldn’t spend $2 billion a year marketing their products to children. According to the Institute of Medicine, food marketing shapes kid’s food choices, affecting what they want to eat and what they are willing to eat.
It’s not just television advertising, but also games on the Internet, characters on packaging, images on the fronts of school vending machines, candy bar sales in schools, ubiquitous food availability like at the checkout, what’s on the kid’s menus at restaurants, toys used to promote restaurant kid’s meals, and many other approaches that create a persuasive chorus of messages that help to shape what kids find acceptable to eat.

Unhealthy food marketing makes it harder for parents to feed their kids healthfully. It also affects what kids are willing to eat in school, childcare, in afterschool programs, at restaurants, at parks,  zoos, recreational facilities, amusement parks, and all the other places kids eat. It helps explain why kids only want to eat pizza, hamburgers, chicken nuggets, and fries at school.

To address food marketing to kids, 16 major food companies have pledged to scale back the marketing of unhealthy foods to kids through the Council of Better Business Bureau’s (CBBB)  Children’s Food and Beverage Advertising Initiative. This is a welcome and important step toward addressing food marketing.

However, several studies show that the program is not working very well. There’s some 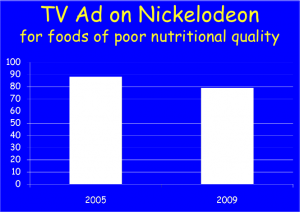 progress, which gives us hope that, with changes, the program could work, but it’s not there yet. In a study of Nickelodeon, the most popular kid’s television station, ads for foods of poor nutritional quality decreased only slightly, from about 90% to 80% of food ads, between 2005-2009, from before self-regulation was in place to after the CBBB Initiative was implemented. Several other studies show similar results. The key reasons why self-regulation, in its current form, is not working well, include: 1) the nutrition standards are not nutritious enough; 2) companies are not covering all their child-directed media; and 3) not all companies that market to kids participate in self-regulation.

In addition to supporting industry self-regulation, there are many actions states and localities can take to reduce unhealthy food marketing to children. Policy changes can be accomplished through legislation, regulation, school wellness policies, media advocacy, contracts, voluntary agreements, zoning, litigation and other approaches. For example:

Food marketing plays a key role in shaping children’s food preferences and dietary patterns; it cultivates a desire for foods that undermine our children’s health. State and local policy can help counter food marketing through targeted public policies, such as those mentioned above. Also, food, restaurant, and entertainment companies must stop fighting parents, and instead work with them and the public health community to develop reasonable nutrition standards and marketing definitions that will better support parents and protect kids. Check out www.foodmarketing.org for more information.

Margo Wootan is the director of nutrition policy at the Center for Science in the Public Interest (CSPI), one of the country’s leading health advocacy organizations that specializes in food, nutrition, and obesity prevention.  Dr. Wootan received her B.S. in nutrition from Cornell University and her doctorate in nutrition from Harvard University’s School of Public Health.  Wootan co-founded and coordinates the activities of the National Alliance for Nutrition and Activity (NANA) and the Food Marketing Workgroup.  She has coordinated and led efforts to require calorie labeling at fast-food and other chain restaurants, require trans fat labeling on packaged foods, improve school foods, reduce junk-food marketing aimed at children, and expand nutrition and physical activity programs at CDC.  Wootan has received numerous awards and is quoted regularly in the nation’s major media.

Community Commons does not necessarily support the views of our guest bloggers but we support civil dialog.